join us donate
LOG IN or SIGN UP
Liquid syntax error: Error in tag 'subpage' - No such page slug join
find a vendor
July 23, 2012 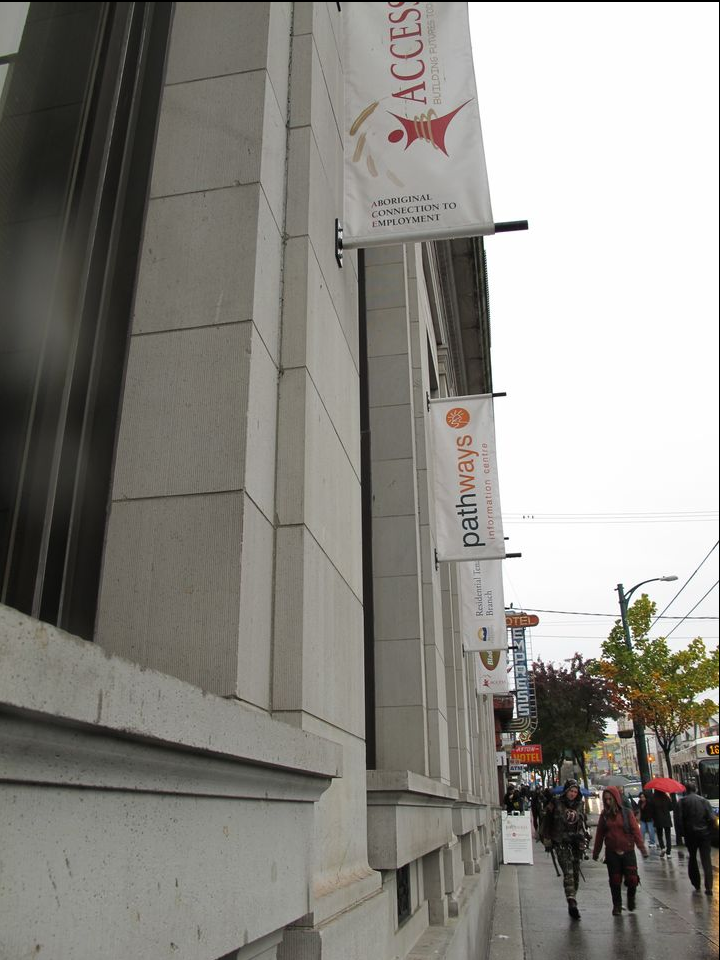 Marc Lawrence is a prolific and enthusiastic creative writer with aspirations to do screenwriting in the future. He is a frequent participant in Megaphone’s community writing workshops. His personal essay on Pathways Information Centre is the product of months of work that he started before arriving at the community journalism class:

Pathways was one of roughly 470 employment-based programs throughout the province shut down this year due to government budget cuts and an expiring contract. The tremendous loss is this: one of the unique things about Pathways is that it caters to a lot of isolated older single men, like myself, who are no longer able to work in the primary resource sector.

The decision was to replace Pathways with the Open Door Group, making an already patented and approved system we have come to know through Pathways more complicated in the eyes of the people it's supposed to serve. It opened its doors in April at 112 West Hastings.

Before explaining my experience with these two programs, I’ll introduce myself as one who has aspirations to become a screenplay writer. My most notable career was that of a sound engineer working with rock bands.

I eventually ended up on social assistance and the ministry, in their mandatory program, had me seated before someone at Open Door. In my initial interview, I explained that I had written screenplays and shopped them around to many independent production companies. I expressed that even though I’d been through some rough times, I still managed to complete first drafts on two novellas and two more screenplays, which I considered my most recent and finest work to date.

The worker’s immediate response was that “We do not help people seeking self-employment.” My immediate thought was: how is it considered self-employment? If I sell a story, then that company or talent agency has hired me to create something that puts all kinds of people in the industry to work in the production thereof.

She chose that moment to painstakingly pick apart every fault she thought I had. She began questioning me about my “drug problem,” concluding that I should seek drug treatment. I had come to see her to look for work, but she kept pushing me in this unexpected new direction.

I felt like I was under pressure to conform to something that really made no sense to my case and that I was only going to get help from these people if I did what they told me.  I felt she did not want to listen to what I said was my career goal.

I was upset, and expressed my frustration. The response was to place me on the Open Door “black list,” never allowed to return. The irony is that the Open Door is a door closed to this welfare recipient.

I left the place thinking: it is easy to see this person’s role is to create jobs for the people around her, therapists and the like, instead of finding me a job I’m skilled at.

I concluded there was no future for me at the Open Door, feeling as though, in their eyes I’m no more than a termite in the timber of society.

Experience tells me that people in the Downtown Eastside (DTES) will not embrace Open Door, which seems to want to place people in any old job because they are under the gun by the Ministry of Social Development to reduce the welfare rolls. No doubt, Open Door did not want to help me pursue my career goals, they wanted to pursue their own.

I know from others in this community that letters were sent to the B.C. government in the hopes of saving Pathways, a much-needed pillar in an already struggling community.

According to TradeWorks, a provincial government training society, Pathways was created as a street-level resource centre to provide community information, free phones, personal message contacts, bulletin boards, work space and computers, assistance with navigation of government and non-government systems, assessment and referral to social and government services, and employment counselling through a community development process.

Three points that attracted me to Pathways: low barrier and easy to access services; longer term intensive case management for those who want to work; and innovative strategies to create employment and self-employment opportunities. A litany of resources were cut by its closure and being replaced by just one: job seeking.

I suppose this is good, but only for those receiving social assistance because without a referral from a case worker at the ministry, one is not accepted at Open Door. In my case, this criteria did me no good, even though I was assured they are not allowed to turn away anyone in the DTES community.

Here is why my passion for Pathways will not falter. From the beginning, my first and most meaningful interaction was with Glen, a bit of a computer guru, who patiently showed me how to structure my screenplay, having had the software that allows the manuscript to structure automatically, instead of having to do it manually, which is a huge help in making things less time consuming.

The chances of finding that kind of help anywhere are close to none, short of paying $400-$500 at the Vancouver Film School, that nobody on $130 social assistance like myself can afford. I learned most of my computer knowledge from Glen. He was a personal Godsend and, like other staff members there, was patient, kind and willing to do whatever it took to help.

In a brief talk with MLA Jenny Kwan, she claimed there was no funding source to help this badly needed resource centre. As for me, all this boils down to a friend (me) trying to help out his friend (Pathways) in a place where the meaning of friendship seems to have fallen through the cracks of the sidewalk, along with countless other DTES souls, at the corner of Hastings and Main.

A final note that shows how Pathways separated itself from single-purpose job placement organizations like Open Door: I’d been told by Ray, an employee at Pathways, that for a lot of people in the DTES Facebook has become the last easy access frontier for communicating with long-distance loved ones. Pathways allowed use of Facebook at times because, speaking from their experience, keeping in touch with our loved ones was an essential part of feeling good about ourselves so that we could find work.