Fall Books: What to read now that the rain's come 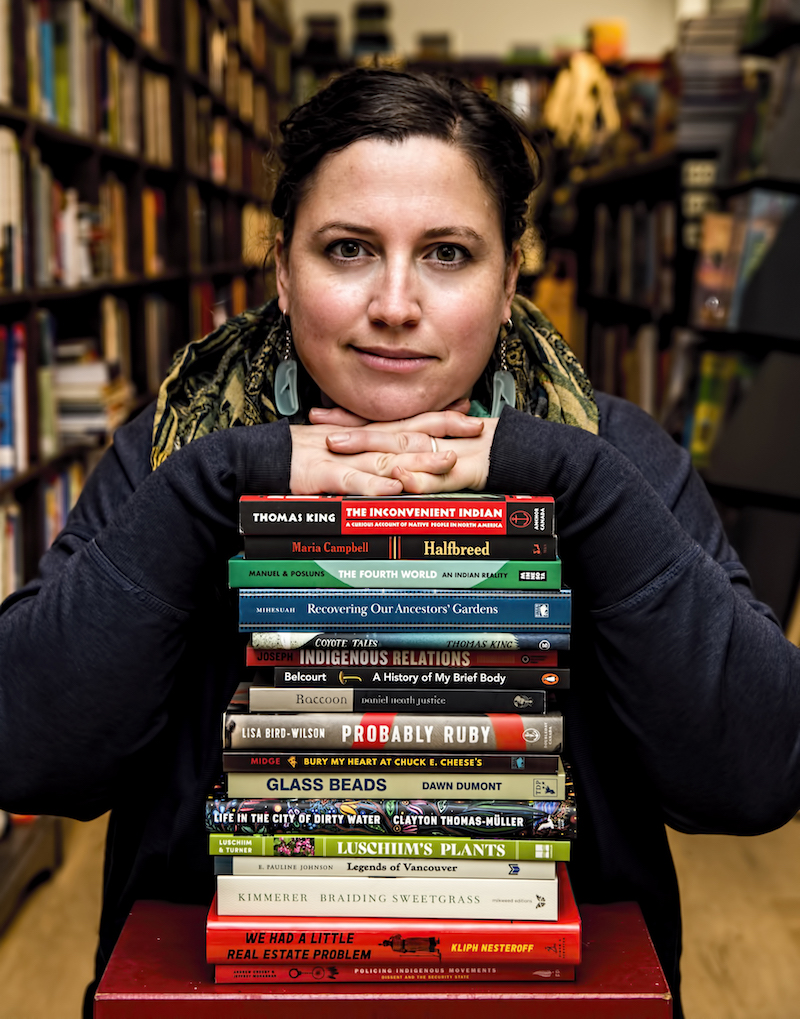 From fantasy, to non-fiction, to Indigenous-penned prose, indie booksellers offer up their top picks for the cozy season.

Autumn is here, with nights now longer and days growing colder. And while many people might be grieving the end of summer and its morning swims in the ocean or sunny days at the park, for book people, there is no better season for reading than autumn.

But what books are worthy of a weekend by the fire?

We turned to the experts—the fine folks at indie bookstores in Vancouver and Victoria—for their the top picks for the cozy season, asking them the following question:

“If you had to choose one must-read book for people to pick up this fall, what would it be and why?”

We invite you to grab a hot drink and a blanket, hunker down, peruse their answers and get your shopping list started. 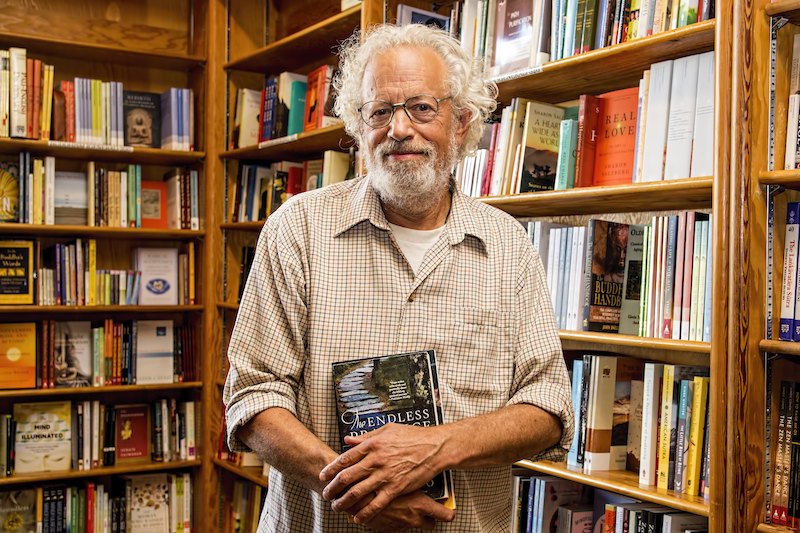 The new title, released in September, offers a radically new understanding of and practical approach to climate change—demonstrating that addressing current human needs rather than future threats is the only path to solving the climate crisis.

According to Lymworth, the book is “an important guide to the practicalities ahead for regenerating our farms, forests, watersheds and the deep fertility of nature on which our human lives depend.”

From this female-owned, family-owned shop comes a recommendation by one of the co-owners, Samantha Holmes. Out of the Fire: Metalworkers Along the Salish Sea, by Pirjo Raits, is published by B.C.'s own Heritage House Publishing.

A stunning art book featuring 23 West Coast artists and craftspeople who work in metal as their primary medium, it is a breathtaking celebration of a diverse group of contemporary artists and artisans who explore the creative possibilities of an ancient medium.

From sculptors to farriers, forgers to blacksmiths, jewellers to metalsmiths, and weapons makers to welders, the 23 people featured in this book reflect the wide range of talent, skill, and ingenuity that exists on Canada’s southwest shores.

“In a time where there a sense of hopelessness out there, it shows people working together and trying to create something beautiful,” says Holmes. 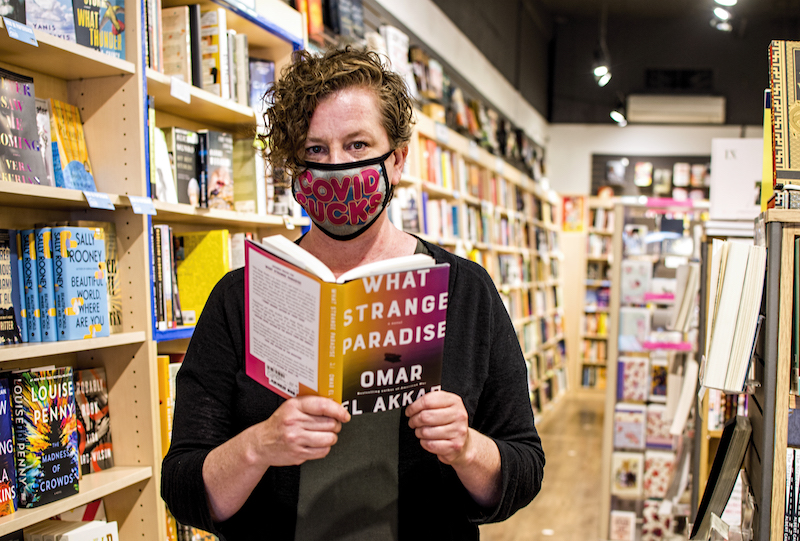 What Strange Paradise, by widely acclaimed author of American War Omar el Akkad, is “one of the best books [she’s] read this summer.” Beautifully written, unrelentingly dramatic, and profoundly moving, What Strange Paradise brings the global refugee crisis down to the level of a child’s eyes.

Nine-year-old Amir is a Syrian boy and the only survivor of a refugee boat that capsizes and washes up on an island. He meets Vanna, a teenage girl native to the island who lives inside her own sense of homelessness in a place and among people she has come to disdain. And although she and the boy are complete strangers and  don't speak a common language, she is determined to do whatever it takes to save him.

The second suggestion is for Ivan Coyote’s new book, Care of: Letters, Connections and Cure. For years Coyote, a beloved writer and performer, kept a file of the most special communications they received from readers and audience members—letters, Facebook messages, emails, soggy handwritten notes—tucked under the windshield wiper of their truck after a gig. Care of: Letters, Connections and Cure combines the most powerful of these letters with Coyote’s responses, creating a body of correspondence of startling intimacy, breathtaking beauty, and heartbreaking honesty and openness.

The release Cloud Cuckoo Land by Pulitzer Prize-winning author Anthony Doerr is a triumph of imagination and compassion, and a soaring story of resilience and hope, says Megan Scott, owner of Ivy’s Bookshop.

Bound together by a single ancient text, the unforgettable characters of Cloud Cuckoo Land are dreamers and outsiders figuring out the world around them: Thirteen-year-old Anna and Omeir, an orphaned seamstress and a cursed boy, on opposite sides of the formidable city walls during the 1453 siege of Constantinople; teenage idealist Seymour and octogenarian Zeno in an attack on a public library in present-day Idaho; and Konstance, decades from now, who turns to the oldest stories to guide her community in peril.

“It’s a magnificent piece of imagination and compassion. It's a redemptive novel about stewardship, the Earth and the human heart,” says Scott.

It Fell from the Sky, written and illustrated Terry and Eric Fan, is a whimsical and elegantly illustrated picture book about community, art, the importance of giving back and wonder. A marble falls from the sky on a Thursday, and the insects speculate what it is and what they can do with it.

The Great Bear is the second book in the Misewa Saga series by David A Robertson. In this Narnia-inspired Indigenous middle-grade fantasy series, Eli and Morgan journey once more to Misewa, travelling back in time. Eli is being bullied at school and tries to hide it from Morgan, while Morgan has to make an important decision about her birth mother. They turn to the place where they know they can learn the most, and make the journey to Misewa to visit their animal friends.

They travel back in time and meet a young fisher that might just be their lost friend. But they discover that the village is once again in peril and they must dig deep within themselves to find the strength to protect their beloved friends. 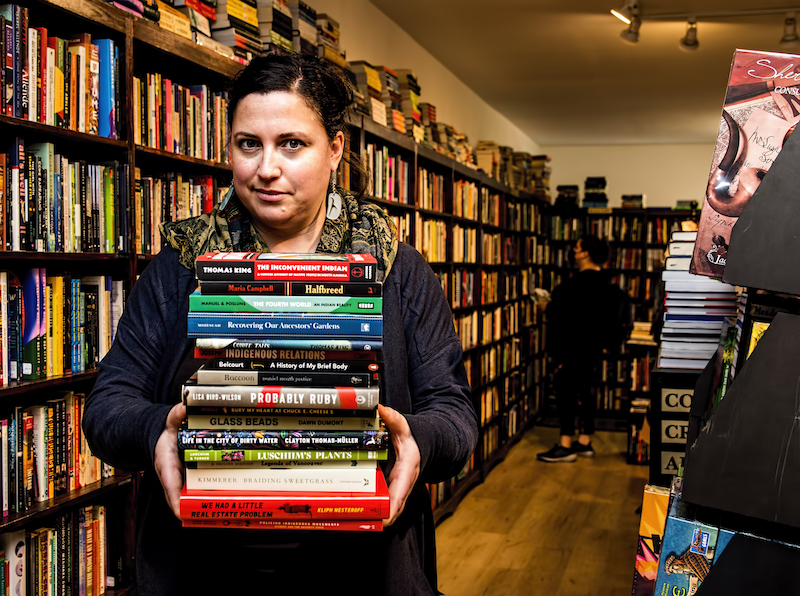 From Vancouver’s Indigenous-owned bookshop Iron Dog Books comes a book suggestion from co-owner Hilary Atleo (above). The Prairie Chicken Dance Tour by Dawn Dumont is the hilarious story of an unlikely group of Indigenous dancers who find themselves thrown together on a performance tour of Europe. The Tour is all prepared and  The Prairie Chicken dance troupe is set for a 15-day trek through Europe, performing at festivals and cultural events, when a series of setbacks results in a string of madcap adventures.

“Dumont is one of my favourite under-appreciated writers working today, and she handles serious topics by pairing social critique with off-the-cuff hilarity" says Atleo. "I am very excited for her new book and hope lots of folks have the opportunity to discover this amazing author.”

Be Gay, Do Comics: Queer History, Memoir, and Satire from The Nib is a queer comics anthology compiled by The Nib, a publication devoted to publishing and promoting political and non-fiction comics. Be Gay, Do Comics is filled with dozens of comics about LGBTQIA experiences—ranging from personal stories, to queer history, to cutting satire about pronoun panic and brands desperate to co-opt pride.

Brimming with resilience, inspiration, and humour, an incredible line-up of top indie cartoonists takes you from the American Revolution through Stonewall to today’s fights for equality and representation.

Two recommendations come from employees of Massy Books, a bookstore with the largest storefront collection of Indigenous titles in Vancouver.

The first is a title by Isabella Wang, one of Canada’s most promising emerging writers. Having already made significant contributions to the literary landscape through her numerous poetic appearances in literary publications and her editorial work with Room Magazine, Wang has established a voice the folks at Massy can’t wait to encounter in this collection of personal, yet referential, work. The much-anticipated Pebble Swing speaks with clarity and innovation to lineages of West Coast poets, while marking a personal tracing of immigrant experience.

Cherie Dimaline’s The Marrow Thieves built worlds not too unlike our own—but that brought us and kept us in with their displays of refusal, resistance, and resurgence. To be able to feel and see love in a world haunted by the descendants of destruction we experience right now creates an engrossing novel that is both escapist yet familiar.

Jessica Paul, the assistant manager and events coordinator for Munro’s Books, suggests Five Little Indians by Michelle Good, which tells the story of five Indigenous children who try to find a place for themselves in Vancouver’s Downtown Eastside after being released from their detention in a church-run residential school, where they suffered years of abuse and trauma. With compassion and insight, Five Little Indians chronicles the desperate quest of these residential school survivors to come to terms with their past and ultimately, find a way forward.

“We believe it is a story that everyone should read to better understand the legacy of residential schools and the need for reconciliation here in Canada,” says Paul, who’s been at Munro’s for nearly 15 years.

Catherine Ellsmere, co-owner of Odin Books, a specialized bookstore that offers mental health and educational resources, recommends The Body Keeps the Score: Brain, Mind, and Body in the Healing of Trauma by Bessel Van Der Kolk.

Published in 2015, the book outlines an approach to healing, explaining how traumatic stress affects brain processes and how to use innovative treatments to reactivate the mind's abilities to trust, engage others and experience pleasure.

“[During the pandemic] people’s lives have been changed in a way that is difficult for folks to understand,” says Ellsmere. “Trauma encompasses so many aspects of our lives, and so much of it is the fact that something unexpected happens and we really struggle to deal with that, to try of make sense of it. This book, though not new, is a timely read.”

Volunteers at Spartacus Books suggested three titles. Staying With the Trouble, by Donna J. Haraway, is part of the critical renegotiation of the concept of the post-human era. In it, Haraway navigates learning across species, expanding our systems of reference to incorporate learnings from non-human kinfolk, understanding the history of non-human kinfolk in relation to colonialism and capitalism.

The Ministry for The Future, by Kim Stanley Robinson, is a speculative sci-fi novel on making the human future. Set in the near future, the novel follows a subsidiary body, established under the Paris Agreement, whose mission is to advocate for the world's future generations of citizens as if their rights are as valid as the present generation’s.

Suffer the Little Children: Genocide, Indigenous Nations and the Canadian State, by Tamara Starblanket, was published in 2018 and tackles one of the most compelling issues of our time—the crime of genocide and whether it can be said to have occurred in relation to the many original Nations on Great Turtle Island now claimed by a state called Canada.

Spartacus Books is a long-running, volunteer-run, independent bookstore on Coast Salish territories. The bookstore makes space available for community organizing, performances and different kinds of gathering, and is currently open for events and is interested in applications from the broader community. 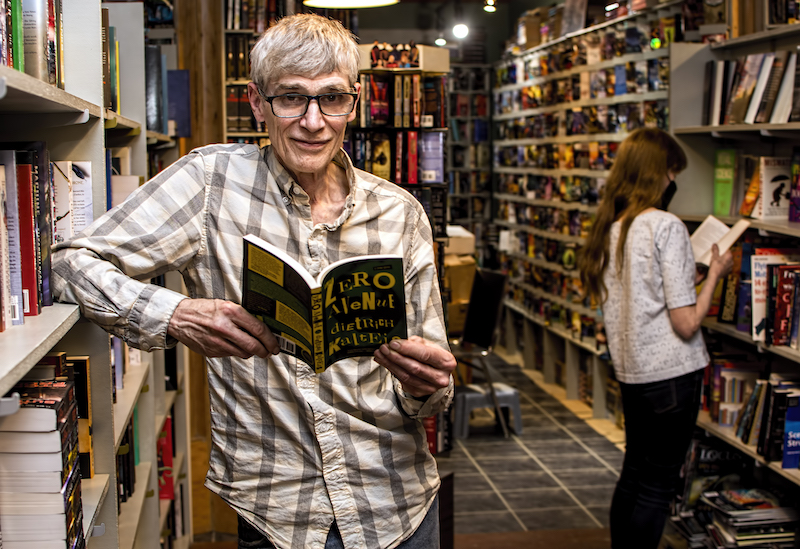 Zero Avenue, by Vancouver mystery Dietrich Kalteis, is the author's grisly, violent fifth crime novel (after 2016’s House of Blazes). Set in 1979, it celebrates the seedy side of Vancouver and the punk scene.

“There’s so much local colour for those who live or know Vancouver. And [Kalteis] approaches his stories with a dark humour I think many will appreciate,” Sinclair says.

The Murderbot Diaries, a science fiction series by American author Martha Wells, is about an artificial construct designed as a Security Unit, which manages to override its governor module, thus enabling it to develop independence, which it primarily uses to watch soap operas.

Told in first person, by the robot, each volume is a new adventure. Home: Habitat, Range, Niche, Territory and Fugitive Telemetry, both released in 2021, are the latest in the series.