join us donate
LOG IN or SIGN UP
Liquid syntax error: Error in tag 'subpage' - No such page slug join
find a vendor
March 19, 2013 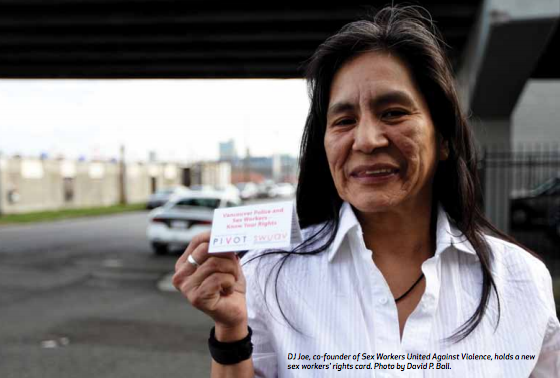 Standing alone under the bleak overpass by the Alexander Street railway tracks, DJ Joe holds up a small white card as a train rumbles by beyond a fence. A white car slides slowly by, and Joe clutches her arms for warmth from the chilly air.

Her foldable, two-sided card would fit easily into the long-time sex worker advocate’s pocket or wallet. Thousands will be handed out to survival sex workers on the street and at support centres around the Downtown Eastside.

“Police should not harass, target, arrest or intimidate you for doing sex work,” the card reads. “In all situations involving sex workers, the [Vancouver Police Department’s] priority is to ensure the safety and security of sex workers.”

Launched on February 28 by Joe’s organization, Sex Workers United Against Violence (SWUAV), and Pivot Legal Society, the new “know-your-rights” card is meant to educate sex workers about their rights with police—based on the VPD’s groundbreaking Sex Work Enforcement Guidelines.

“For our officers that deal with sex trade workers or complaints about them... it gives them real, concrete guidelines as to what the department expects of them,” Cst. Brian Montague, spokesperson for the Vancouver Police Department, told Megaphone when asked about the guidelines. “It’s quite clear that the overall expectation is the safety of those involved in the sex trade.

“Our officers have been directed to do everything possible to build a relationship with sex trade workers. [They] have a great deal of discretion, and we want them to use that discretion.”

The guidelines were released within a month of Wally Oppal’s strongly worded report from the Missing Women Commission of Inquiry, in which he concluded that “the relationship between police and sex trade workers is generally marked by distrust.”

His recommendations included working to improve the department’s relationship with sex workers, responding more quickly to reports of violence and ceasing penalizing women for minor bylaw infractions or mischief charges. All of those, Montague stated, have been incorporated into the new guidelines.

“There’s been a number of things that contributed to the making of this policy,” Montague explained. “Obviously, at the missing women inquiry, we made it quite clear that we’re committed to implementing all its recommendations, and building relationship with workers in the sex trade. This policy is a party of that ... A lot of work has gone into this—a lot of thought.”

An advocate for at least 14 years, Joe said police still have work to do to improve their policing.

“They need to respond a lot quicker,” she said. “A few times times, I’ve phoned in and it took them two to three hours to respond—which is too late to help these women. It’s hard to be a part of this community—to try to protect this community, and protect the girls.

“It’s hard enough that we’re struggling down here. When we show them this card, I’m hoping they’re going to appreciate it and use it. I hope the message gets across—and maybe make them feel more comfortable that we have these cards out here, and they can be a lot safer.”

“[The guidelines] were the product of many months of efforts on behalf of the department—in conjunction with sex worker organizations and community-based advocates—who were really asking the department to shift its priority away from enforcement of the prostitution laws, and instead to ... make sure that sex worker safety is at the forefront of police efforts,” said Pacey. “The legacy of missing and murdered women in this community has been, in part, the result of Vancouver police neglecting and failing to respond when sex workers experience violence.”

While Pacey said that treating sex workers’ safety concerns as serious might seem “obvious” to many, its explicit recognition by police is important. “This is a very important ... recognition by the department,” she added, “and we’re very encouraged.”

For Jennifer Allan—a former survival sex worker and today a co-founder of Downtown Eastside Cop Watch—the policy is a move in the right direction.

“It’s nice to see them taking the next step—prioritizing violence against sex workers,” Allan told Megaphone. “They should have done that a long time ago, but at least they’re doing it.

“We all know the reason they’re doing this is because of the horrible tragedy of the missing women that happened. In the end it is sad: how many women had to lose their lives before the Vancouver police needed to make these changes?”

Allan believes that more than sex workers' rights cards are needed, however. She hopes women can receive training about standing up for their rights, and added that police culture must change profoundly.

“You can change the policy, but it doesn’t mean the institution of policing has changed,” she cautioned. “It was invented by Caucasian men for Caucasian men, for starters; it was based on racism, homophobia, and discrimination.

“So it’s not surprising that for so many years, police have mistreated drug addicts, sex workers and people in poverty. So now police are supposed to treat these people better, but they haven’t changed all the people doing it.”