join us donate
LOG IN or SIGN UP
Liquid syntax error: Error in tag 'subpage' - No such page slug join
find a vendor
January 30, 2013 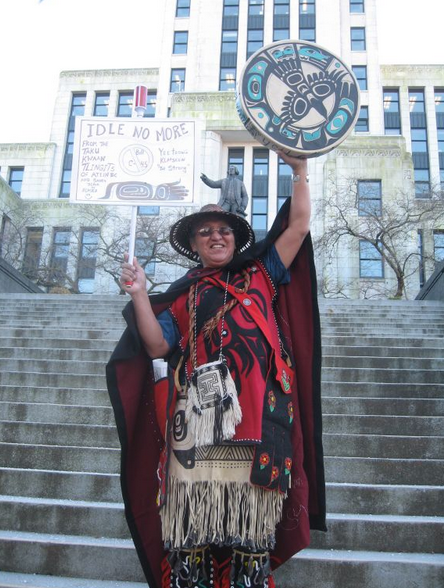 The Idle No More movement has not only empowered indigenous peoples to stand up to the federal government, but it has awakened all Canadians to the dismal state of Aboriginal rights in this country. For a better future for all of us, we should stand in support of Idle No More. This is a generational chance for change we cannot afford to miss.

Under the watch of Captain George Vancouver’s statue, a few hundred protesters convened at City Hall on January 11 to show their support for the Idle No More movement. It was a symbolic reminder that First Nations people still live with the legacy of Vancouver’s visit more than 200 years ago, but also how little this city acknowledges its history with Aboriginal people and unceded territory.

The protest was just one of dozens across the country that day, when Prime Minister Stephen Harper finally and futilely met with native chiefs, and one of hundreds more that will surely come if the federal government doesn’t start to properly address Aboriginal poverty, environmental protections and treaty rights. Idle No More has pushed Canada toward the cusp of great opportunity—it would be a folly for us to waste it and naïve to think the protests will dissipate if we do.

And they are given little hope for their future: while 82.5 percent of non-Aboriginal students graduate high school within six years in Vancouver, a mere 32.1 per cent of Aboriginal youth get their diploma. This is the legacy of colonialism that perpetuates a cycle of poverty and pain.

There isn’t a better example of how this city regards this massive social breakdown than in its response to the missing and murdered women of the Downtown Eastside. Politicians and the police willfully ignored calls to save women, predominantly Aboriginal and sex workers, from a predatory killer. And still, more than a decade after Willie Pickton was arrested, not one of them has been held accountable.

Along with fighting to protect the land and water rights that will be eroded in Bills C-38 and C-45, Idle No More has inspired aboriginal peoples to turn this into a fight for the basic human rights that we all deserve. And when one group of people in our country faces such overt discrimination, all Canadians pay for it—through expensive social programs and with our own social consciousness.

Idle No More can be transformative for Aboriginal peoples and all Canadians if we want it to be. Creating change and addressing the complicated social and legal issues that impact Aboriginal people will be difficult. It will take time, patience and more resources. But with a concentrated effort we can and should resolve these problems. Much as they have had to do throughout their history with colonialism, Aboriginal people will fight for their rights alone if they have to. But just think of what we can accomplish if we all stood together. #idlenomore