join us donate
LOG IN or SIGN UP
Liquid syntax error: Error in tag 'subpage' - No such page slug join
find a vendor
February 05, 2013 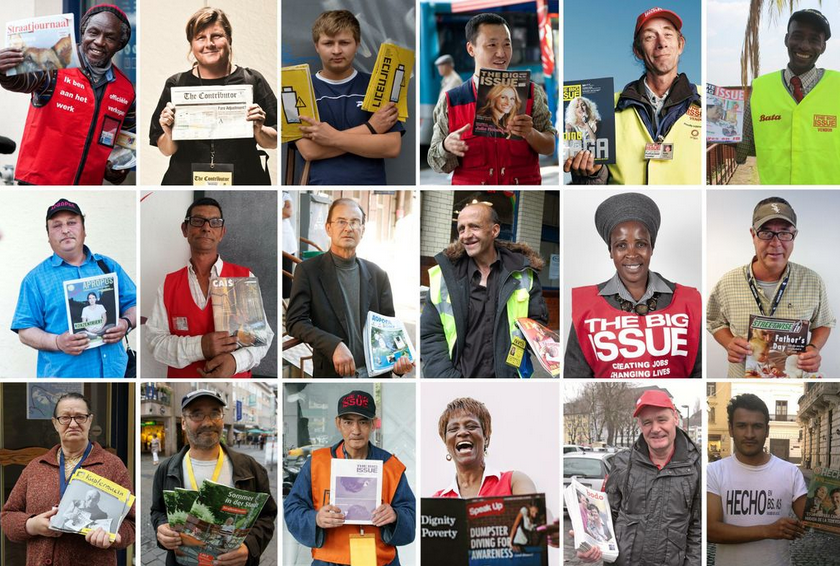 The vendors out selling Megaphone on the streets of Vancouver aren't alone. They are part of an international community of homeless and low-income vendors who sell magazines and newspapers just like Megaphone on the streets of their cities. To recognize the amazing work they do every day, I invite you to join us in celebrating International Street Paper Vendor Week from February 4-10. It’s a great chance to let your vendor know how inspiring they belong to your community as well.

The very first street paper was started in 1989 in New York City (Vancouver’s first street paper started in 1992). Since then, the street paper model has blossomed into more than 120 publications covering 40 countries with a combined global circulation of 1.6 million per edition, or 27 million a year. There are roughly 14,000 homeless and low-income vendors selling these papers on any given day, and twice that number go through the program—many moving on after they’ve progressed to other employment.

This makes publications like Megaphone the biggest social enterprise in the world. While each magazine and newspaper is independent of each other, they come together under the banner of the International Network of Street Papers (INSP) and, more locally, the North American Street Newspaper Association (NASNA).

Each publication in these networks may look a bit different, but they all perform the same service: to provide an economic opportunity for homeless and low-income people. And they each work towards helping people change their lives.

“Back when I first started selling Megaphone, I was hurting,” says Kris Cronk, who works at Dunsmuir and Seymour. “It was more about the money. But it’s not about the money anymore. I mean, of course, I need a couple bucks, but I’ve moved on. It ain’t about that. I know who I am now. Being alone ain’t so bad. I found myself, and I love myself now. I can share that with people. And then it all comes back. I feel it from them.”

It’s a sentiment that is echoed across the world. From Melbourne to Montréal to St. Louis to Seoul, street papers are helping give people a chance to connect and help support each other.

“I’ve gained so much and found people that have really supported me,” says The Big Issue South Africa vendor Erica Phillips. “They notice my determination and outgoing personality. I’m fortunate to have many customers who see me not just as a vendor but as a friend."

“It got to a point where I was either going to get drunk or sell papers,” says Charles Yost, who sells Portland’s Street Roots and is now a recovering alcoholic. “It's something I can look forward to. I get to talk to a lot of people. It keeps me out of isolation.”

Each of the vendors who sell Megaphone, and publications like it around the world, have overcome some incredible obstacles in their past. International Street Paper Vendor Week is a chance for all of us to remember how purchasing Megaphone every two weeks helps them move forward.