join us donate
LOG IN or SIGN UP
Liquid syntax error: Error in tag 'subpage' - No such page slug join
find a vendor
August 15, 2013 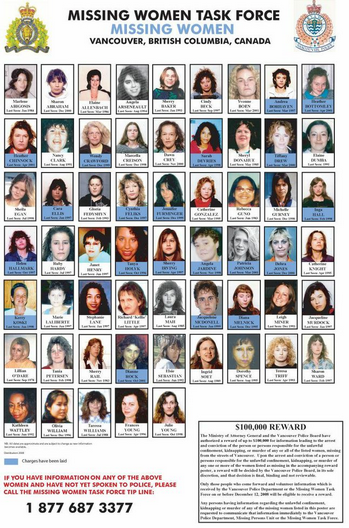 In a long overdue and historic measure, the premiers of Canada’s provinces and territories have thrown their support behind a call for a national public inquiry into missing and murdered Aboriginal women. The federal Conservative government has predictably dismissed the call, but its necessity cannot be diminished. We can’t stop demanding justice for these women until it is delivered.

According to the Native Women’s Association of Canada (NWAC), there have been 582 documented cases of missing or murdered Aboriginal women and girls in this country as of March 2010. And although Aboriginal women make up just three per cent of the total female population, between 2000 and 2008, Aboriginal women accounted for 10 per cent of all female homicides. Half of these murders remain unsolved.

The reasons for this violence are multiple, but primarily it is a result of the poverty afflicting many Aboriginal communities, pushing women into extremely vulnerable positions. At its roots is a legacy of racism and misogyny that leads some men to feel they can abuse Aboriginal women with impunity and governments to ignore the violence and discrimination.

Here in Vancouver, we’re all too familiar with the painful loss of the dozens of Aboriginal women who were brutally murdered by Robert Pickton—and the blatant indifference their disappearance received from both local police and politicians. It is a shameful stain on this city that could take generations to clean.

Unfortunately, the Conservative government has already dismissed the premiers’ and Aboriginal leaders’ call for a national inquiry. In the past, Prime Minister Stephen Harper has said he is “skeptical” of the effectiveness of public inquiries. Certainly we saw that without a proper mandate and representation British Columbia’s own inquiry into missing and murdered women was nothing more than a circus show. Even so, the pointed recommendations and criticisms that came from commissioner Wally Oppal seem destined for the dustbin.

So why a national inquiry?

A fully funded national public inquiry given proper jurisdiction would give us an opportunity to unearth the real reasons why Aboriginal women are still forced into precarious positions that cause their death. A national inquiry that gave full representation to Aboriginal voices would allow us to look at how the police and government agencies are still failing Aboriginal women. And a national inquiry would force the country to reconcile why we have continued to let a segment of society endure such brutal violence and what we can do to stop it.

It is the very least that the women who have lost their lives deserve.