join us donate
LOG IN or SIGN UP
Liquid syntax error: Error in tag 'subpage' - No such page slug join
find a vendor
March 25, 2013 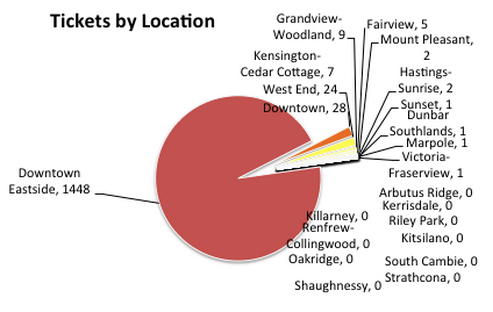 Despite assurances from Mayor Gregor Robertson that it would stop, the Vancouver Police Department (VPD) has continued to discriminately target low-income Downtown Eastside residents. Over the past four years, an astonishing 95 per cent of all street vending and traffic bylaw tickets issued in the city have been handed out in the neighbourhood. This is nothing more than a concerted effort on the part of the police to punish poor people.

I remember being taken aback in December 2008 when East Hastings, usually bustling with gregarious street vendors, cigarette sellers and bottle binners, had become a virtual ghost town. Police officers had started a “ticket blitz”, handing out hundreds of tickets for minor infractions such as spitting, jaywalking and riding a bicycle without a helmet. The recipients of the tickets could never afford the fines, which ranged from $100-$250.

Without any warning, the VPD, under the guise of tackling street disorder, had decided to ramp up enforcement of bylaw infractions it had previously ignored—and continued to ignore in other neighbourhoods.

At the time, Mayor Gregor Robertson, who had recently won his first term but had yet to be inaugurated, told me “We can’t ticket our way out of problems”. He promised to tell the VPD to stop this discriminatory policy. However, a recent Freedom of Information request by Pivot Legal Society lawyer Douglas King shows the policy hasn’t stopped at all.

Between 2008 and 2012, the VPD handed out 1,448 vending tickets in the Downtown Eastside. Downtown, the neighbourhood with the next highest number, had just 28 tickets. And while the number of tickets in the Downtown Eastside is down from the peak of December 2008, it has consistently been about 30 tickets a month over the past four years—with a particular focus on street vending.

The VPD has given various explanations for the policy, saying the Downtown Eastside has the highest number of infractions, but also that they are targeting stolen goods and drug dealing. But the bylaws cover everything from jaywalking, which seems to happen with almost reckless abandon downtown, and garage sales, which are a cultural staple everywhere across the city. And stolen goods are rarely sold in the open. Besides, the police have different tools and laws to address that.

Street vending is an important resource for Downtown Eastside residents. It offers a much-needed source of income for the sellers, who mostly find their goods trolling dumpsters across the city, and an affordable shopping option for low-income residents. Take a stroll through East Hastings and you’ll see that the vast majority of goods being sold are found consumer items: old VHS tapes and books, cellphone power cords and clothes.

But regardless of the VPD’s myopic and punitive policy, Robertson and the Vision council should have been on top of this. Why did they let this policy go on for four years? Where is the transparency and accountability?

To its credit, the city has helped facilitate a weekly and legal street market for Downtown Eastside vendors at Pigeon Park every Sunday afternoon. However, that’s just four hours a week and isn’t nearly enough to address the economic needs of the low-income community.

Robertson needs to show that he is more than just talk when it comes to defending the Downtown Eastside. As both mayor and chair of the police board, he needs to take some strong action and ensure the discriminatory ticketing stops immediately.