join us donate
LOG IN or SIGN UP
Liquid syntax error: Error in tag 'subpage' - No such page slug join
find a vendor
February 20, 2014 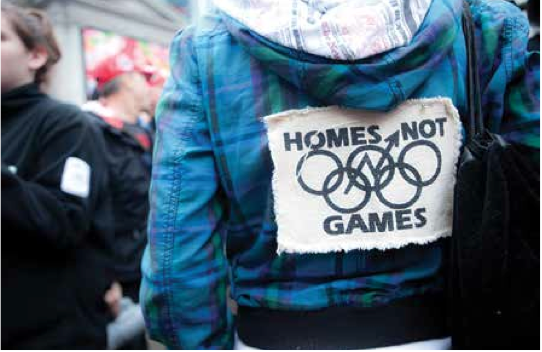 I’m having a hard time watching the Winter Olympics in Sochi, Russia. While I’m a big fan of amateur sports, the 2010 Winter Games in Vancouver left a bad taste in my mouth. Four years on, we can see the benefits pledged to low- and moderate-income people never materialized. It’s hard to celebrate a legacy of broken promises.

When Vancouver bid on the 2010 Winter Games, the bid committee and government partners signed an Inner-City Inclusive Commitment Strategy. The strategy was intended to mitigate the negative effects past Olympics had had on low-income communities and maximize potential opportunities. It was the first of its kind for any Games.

The strategy offered 37 promises, which included making a portion of tickets more affordable, protecting civil liberties and ensuring no one was made homeless or was displaced because of the Games. It also promised to provide an affordable housing legacy.

However, it was clear early on that none of the government partners had any intention of fully seeing theses promises through. While Vancouver was at the start of a real estate boom, and the gentrification of the Downtown Eastside was starting to look like an inevitability, the Olympics opened up the floodgates for developers.

By 2005, many of the low-income Single Room Occupancy (SRO) hotels in the Downtown Eastside started to get shut down with plans to turn them into student housing or condos. With its upscale restaurants and boutique shops, the Downtown Eastside today barely resembles the inclusive community it once was.

And in 2006, unscrupulous landlords around the city started exploiting the province’s weak Residential Tenancy Act to kick out moderate-income tenants from apartments through unnecessary renovations. It resulted in the coining of the term ‘renovictions’.

Perhaps the biggest disappointment was the Olympic Village. Presented as the flagship of the affordable housing legacy, it was originally supposed to consist of one-third social housing, one-third middle-income housing and one-third market housing. It was then reduced to just 252 units of social housing, or 20 per cent, before being cut again to 126 units.*

One just has to look at Vancouver’s current real estate prices to see how the city’s affordable housing legacy is doing.

However, the province never came close to its targeted goal. It was supposed to build 3,200 units of social housing before the Games started, but during that time housing advocates claimed 1,300 units had been lost. At the same time, homelessness more than doubled—from 670 in 2002 to 1,600 in 2013, according to homeless counts.

I wish all the athletes well in Sochi, but I hope you’ll excuse me if I can’t get behind the spirit of the Games and celebrate their victories.

*Correction (02/20/2014): The original article said the amount of social housing units at the Olympic Village had been reduced to 252. The correction notes that it was reduced even further to 126 units.