join us donate
LOG IN or SIGN UP
Liquid syntax error: Error in tag 'subpage' - No such page slug join
find a vendor
August 26, 2021

Climate change is here and hurting the most vulnerable 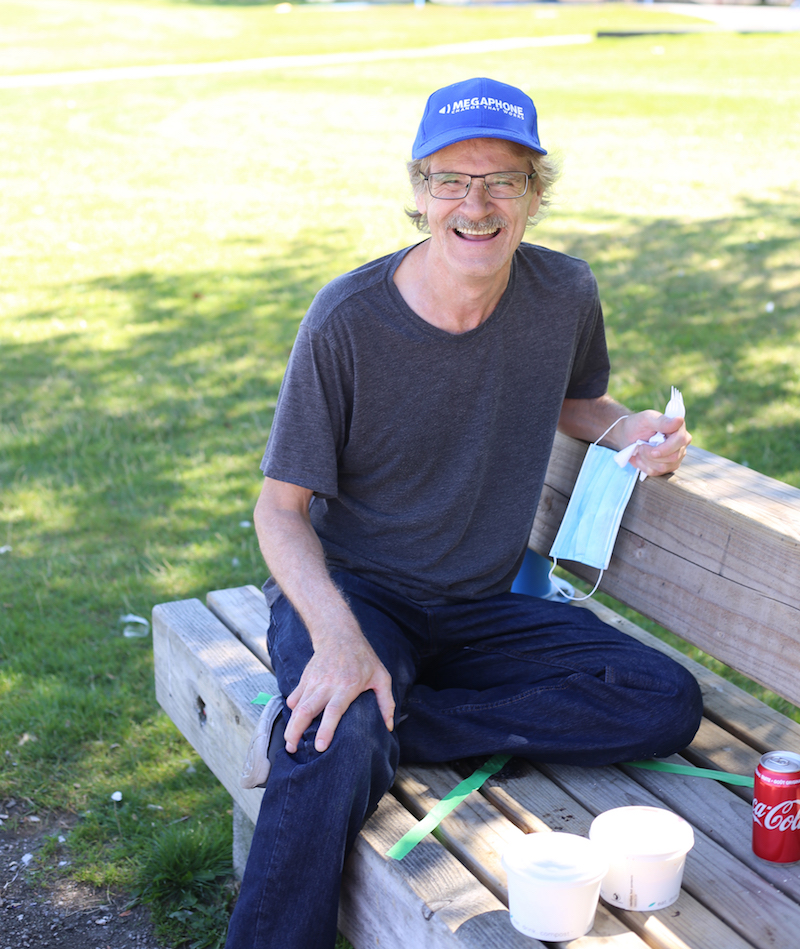 On a bright Wednesday morning in late June, Megaphone’s Vendor Advisory Board gathered as it normally does, to give feedback and receive updates on the vendor program.

While there’s always plenty to talk about — customer feedback on the current issue, cover preferences for the magazine or literary edition, sales numbers and selling techniques — that morning the conversation was quickly redirected to the weather.

The Vendor Advisory Board, or VAB, is regularly elected by the vendor population to represent their interests and needs to staff, and the most pressing issue that week for vendors would no doubt be the heat wave that was to descend on the region in a few days. There was concern that not all vendors would be equipped to handle the extreme temperatures.

So that morning, VAB members Stephen S., Mary S. and Peter T. brainstormed cooling solutions for their peers, which the staff could then pass on as vendors came through the vendor hub — along with water bottles. The VAB would also come up with a list of items the staff could raise funds to purchase for vendors, from portable fans to electrolyte packets.

On the days that followed, the VAB’s concerns proved to be warranted. Temperatures soared past seasonal records, and it was the most vulnerable in our communities who were hardest hit. The number of sudden deaths for the duration of the heat wave would triple the same period in previous years, and the majority of people who died were seniors, many with underlying health conditions.

A 2018 study from Urban Forest Strategy also made the rounds in local reporting on the impact of the heat wave in Vancouver, as it demonstrates that uneven distribution of urban foliage means that some of the poorest neighbourhoods, with the fewest trees, would experience the most extreme heat.

The next time the VAB met, Peter was contending with the news of the devastating fire in his hometown of Lytton, which he implores on page 8 of this issue should be a wake-up call to governments and industry. As Lytton resident Gordan Murray pointed out in an interview with the CBC, his town “is really a microcosm of climate change, because we are a small, rural, Indigenous, low-income community, and we are at the spearpoint of climate change. But it's coming for everybody.”

The work of the VAB has also been an instructive lesson with big implications. Forest fires continue to cause forced evacuations throughout B.C. and extreme temperatures persist in August forecasts, highlighting the importance of supporting our friends, neighbours and colleagues, and checking in on the most vulnerable with the least access to resources to endure the heat.

But as Peter says, we need much bigger, structural transformation. Climate change is here and is hurting the land, water and air that support us, and allow us to support each other.

Thank you to everyone who supported our fundraising drive for hot weather health kits for vendors! You helped them keep cool with essential supplies to beat the heat.

You can continue to support Megaphone, and celebrate our vendors, at the 2021 Megaphone Breakfast Fundraiser, coming back this year on Sept. 22 from 7:30-9 a.m. There will be in-person and online options (for groups and individuals) to be part of an inspiring morning as we eat delicious pastries, drink great coffee, announce the Vendor of the Year and join together to amplify marginalized voices. You can purchase tickets and learn more about the event at megaphonemagazine.com/events.

At top: Megaphone vendor and writer James Witwicki enjoys some drinks and snacks at a recent barbecue. File photo.