join us donate
LOG IN or SIGN UP
Liquid syntax error: Error in tag 'subpage' - No such page slug join
find a vendor
May 05, 2020

by Julia Aoki follow this author
photos: Above: People sit around a table at the Oppenheimer Park homeless encampment prior to provincial officials erecting fencing. Right: Activist Chrissy Brett has been a leader at the park's encampment since its inception. Jesse Winter photos.
feature

A love letter to Oppenheimer Park 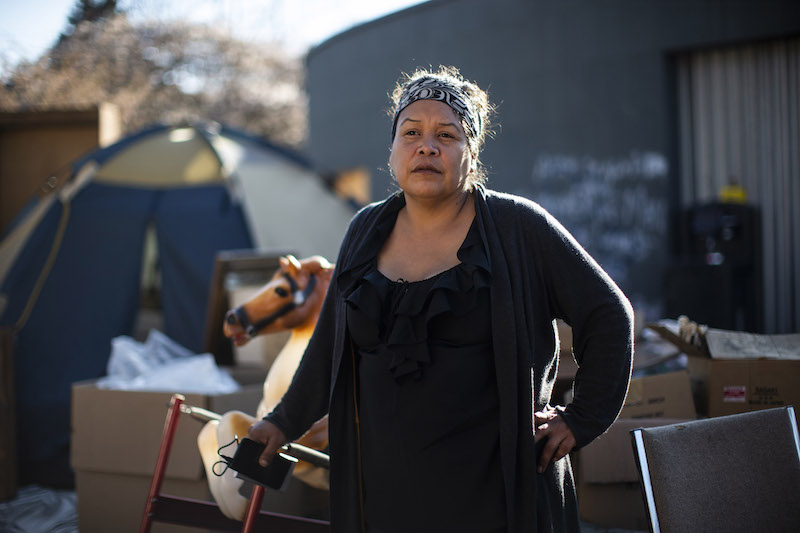 Director's Corner: Oppenheimer Park was—and is—home to a defiant refusal of the erasure of community.

I have an early memory of running up a hill in Oppenheimer Park, holding a skewer of barbecued tako. My little legs struggled to make it up that hill, which seemed like a mountain, so I could eat the salty, smoked treat in the sun.

My family was at the park visiting the Powell Street Festival, a Japanese-Canadian cultural event, as we did almost every summer. We were there to eat while taiko drummers drummed, scoop up goldfish before our paper nets dissolved (a game, that inevitably resulted in at least one new pet for the family every year), and eat some more.

I didn’t know then how consistently Oppenheimer Park would figure in my life. As a young adult, I worked for the festival and would go on to spend many more summers there, accumulating additional memories and expanding my interest beyond the food.

While the Powell Street Festival is a celebration of culture, it's also a defiant refusal of the erasure of the Japanese-Canadian community. The festival was formed in the ’70s, during the years of community organizing for redress for families interned during the Second World War. Each year the festival returns as a gesture toward the time when it was the pre-war centre of Japanese-Canadian economic and social activity.

While my experience working for Powell Street Festival helped to deepen my understanding of Japanese-Canadian history, it also piqued an interest in local history and contemporary politics that continues today. Oppenheimer Park has for a long time been a site of organizing and reclamation, and in some ways it’s been a cypher for the contestations that shape the City of Vancouver.

Located near the original coastline of the Salish Sea inlet, Oppenheimer Park—along with all of Vancouver—is on the unceded territory of Squamish, Musqueam and Tsleil Waututh. As the land was occupied and developed by settlers in the 19th century, what is now the Downtown Eastside quickly became a hub for transient workers and labourers servicing local industry, such as the Hastings Mill and B.C. Sugar Refinery.

In 1902, David Oppenheimer, Vancouver’s second mayor as well as wholesaler and landowner on the east side, would open the park, first known to the community as the Powell Grounds. At that time, a Japanese community had already formed and the park would soon be used by the regionally famous (and now Canadian Baseball Hall of Fame inductee) Asahi baseball team.

The Powell Grounds would also establish a legacy as a site for workers' protests. In the 1910s, the Industrial Workers of the World (or “Wobblies”) would gather in the park to fight for free speech. In 1938, it would be the site of a massive protest of up to 15,000 workers against the police brutality of Bloody Sunday.

In more recent history, the park is affectionately referred to as the backyard of the Downtown Eastside. For a time, I sat on the city’s Oppenheimer Park Commemorative Task Force and I have often thought that it must have more commemorative elements per square foot than any other park in the city.

Along with more conventional plaques, special trees and carvings are sprinkled on pathways that cut through the park. A carving erected in 1997 by the Vancouver Aboriginal Council was described in a leaflet as “a memorial to our sisters and brothers who have died unnecessarily in the Downtown Eastside, it is also for those who have survived and continue to survive in this neighbourhood.”

Today the park is the site of a tent city and the Vancouver Park Board is nearing the point of a "decampment plan" and injunction that will remove remaining residents. At the time of this writing, the plan has not been released, and what remains to be seen are the short- and long-term implications of the relocation plan for park residents.

Tent cities in Vancouver and the region are visible symptoms of the shortage of adequate housing, and Oppenheimer Park has been a regular site for a community of people experiencing street homelessness to organize and build security—most recently in 2014 and before that in 2008.

It is clear that living accommodations need to be safe, secure and affordable, and if they’re not, people will end up on the streets again. Park residents do not want to be relocated to shelters or substandard SROs, where they would feel unsafe and their belongings would be insecure.

While focusing on dispersal might calm general anxiety over the reality of a creeping increase in homelessness in Vancouver, it only creates more vulnerability for those who are actually living it. And while an assembly of people and tents will make homelessness more visible, it isn’t the cause; likewise, disassembly doesn’t reduce homelessness, it only obscures it from view.

Tent cities are not a solution to street homelessness, but in the face of a lack of alternatives, a community has done its best in its own backyard.

This article was published in the February 2020 edition of Megaphone, before reports of community transmission of COVID-19 in BC or implementation of social distancing requirements. In May, in response to the pandemic, tent cities in Vancouver and Victoria are being dismantled and residents moved to hotels and other sites, with promises of long term housing in the future. Megaphone advocates for secure housing and non-coercive wrap-around supports for the health and safety of all people experiencing homelessness in our communities.

Julia Aoki is the executive director of Megaphone.