join us donate
LOG IN or SIGN UP
Liquid syntax error: Error in tag 'subpage' - No such page slug join
find a vendor
March 13, 2020

Vancouver: Only the lonely? 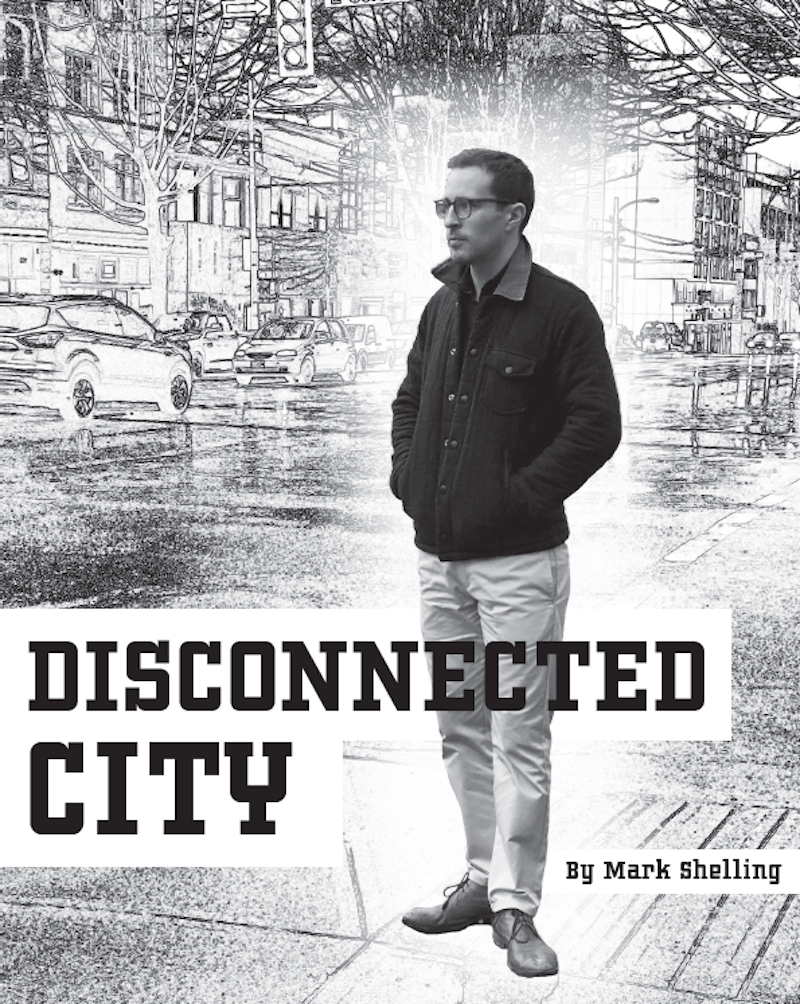 Megaphone volunteer and marketing writer Mark Shelling sometimes feels vexed in the city... until he reaches out.

I've been told I talk to strangers a lot. It's odd, because I really don't consider my self an outgoing person. On most days, I'm usually plugged into my phone, walking with my gaze just above curb level. But once I've meandered far enough away from my neighbourhood, and the coast seems clear that I won't run into any ex-co-workers or old high school classmates, the grip subconsciously loosens.

I slowly begin seeking out micro engagements with people: “You look lost, do you know where you're going?" Or, “Is that brand any good? Never tried it before.”

Maybe I come off as a bit creepy or forward, but these moments offer a social clinic of sorts; trial and error that helps me hone my skills for job interviews or dreaded networking events. The best part is, if I end up choking on a syllable or chickening out midway through, I can just walk away like a cool professional.

Living with social anxiety in a city like Vancouver has its pros and cons. On the one hand, nobody seems to notice your aversion to public eye contact because most people out and about appear to have the same reluctance. In contrast, it acts as an added handicap to making any connection at all in a social climate that is sometimes described as an inhospitable tundra.

In fact, one in eight people in B.C. experience frequent anxiety in one form or another at any given time. Across the country, eight to 13 per cent of all Canadians suffer from social anxiety specifically—one of the most common anxiety disorders.

One of the unfortunate ramifications of anxiety is it can result in isolation. In Vancouver, according to a 2017 survey by the Vancouver Foundation, 14 per cent of residents say they feel lonely often or almost always, and nearly 60 per cent say they are spending more time alone than they would like. And while the remedy lies in increasing inter-personal connections, residents’ participation in almost every community-related activity has dropped since 2012.

Residents with low incomes are particularly at risk of loneliness, with 47 per cent saying they’re alone too often. Thirty-six of those who are unemployed feel this way. Across all demographics, nearly one-quarter of Metro Vancouver residents experience loneliness more often than they would like.

Hearteningly, a solid 60 per cent of those surveyed say they prefer connecting with others in person, rather than through other methods, such as  social media, texts or phone calls.

I certainly enjoy my “10-second relationships” while on the bus or waiting in line at the grocery store. With several years of practice under my belt, I've even built up a mild tolerance for speaking publicly—so much so that I've commenced pushing beyond my 10-second time limit.

I've been getting cocky really, drunk with power that I'm now living in a social space that I formerly thought unbearable. When by all accounts, the conversation has expired, I frequently am applying shock paddles to it and yelling CLEAR!

Yet this is where I've begun hitting a wall. Most people will tolerate you for a moment, knowing the encounter will have a brief lifespan, but once you attempt to push beyond that, it can feel like you're pathetic. Here I am, ready to do my victory lap having conquered my affliction, and that’s when people shut the door in my face. Damn.

I have hope, though. About a year ago, to branch further out of my comfort zone, I began volunteering with Megaphone—setting up tables at vendor meetings, putting coffee out, and other tasks… nothing Nobel Prize-worthy, but hey, it's something.

And an interesting thing has happened. During my now-frequent journeys to the Downtown Eastside (DTES), I began noticing something that was a bit of a culture shock at first: people were beating me to the punch to start interactions. It was as if they also had the same resolution, but it wasn't coming from a place of anxiety. Walking down Main Street on my way to the Megaphone office, I notice the street is no longer merely a means of getting from point A to point B like I've experienced for so long. People are actually making use of and enjoying the space in between. It struck me that I have started using a word that I've never really associated with Vancouver—community.

Despite its challenges (poverty, homelessness and other hardships), or maybe in spite of them, the DTES sets an example for how people can treat each other. It remains one of the poorest neighbourhoods in the country income-wise, but it’s certainly not the poorest in spirit. In the DTES, people engage with each other. It's almost as if there's no room for ego to exist, which, in an era obsessed with the worship of self, is like a splash of cold water in the face.

When I met Megaphone vendor Theresa Ing a few years ago, she was on the corner of East Hastings and Abbott Streets selling magazines and calendars, along with magnets and other trinkets she had made. A woman in her mid-40s, she was hopefully holding up the latest issue to passers-by. When I chatted with her for a bit, we covered a few general topics quickly—the weather, her sales, the magazine. But when we hit the threshold of when people are typically jumping ship, she started telling me about her magnets and a deeper, more meaningful conversation took place; a connection was made.

I still see her from time to time and I always strike up a conversation, or buy something small if I have cash. I honestly don't think she ever recognizes me, but when I'm walking and I see her, I do feel like I'm part of a community. No longer either counting seconds or dodging glances, it's good to have some sense of what it feels like to have robust social health; to be a part of something.

I still talk to strangers quite a bit. I'm even up to 20 seconds now when the opportunity presents itself. But when I'm on my way to Megaphone or walking through the DTES, I know I can stop counting.

Want to get connected and volunteer with Megaphone? Drop us a line at info@megaphonemagazine.com