join us donate
LOG IN or SIGN UP
Liquid syntax error: Error in tag 'subpage' - No such page slug join
find a vendor
January 14, 2014

Don't trash the Coho: A call for cleaner streams and healthier fish 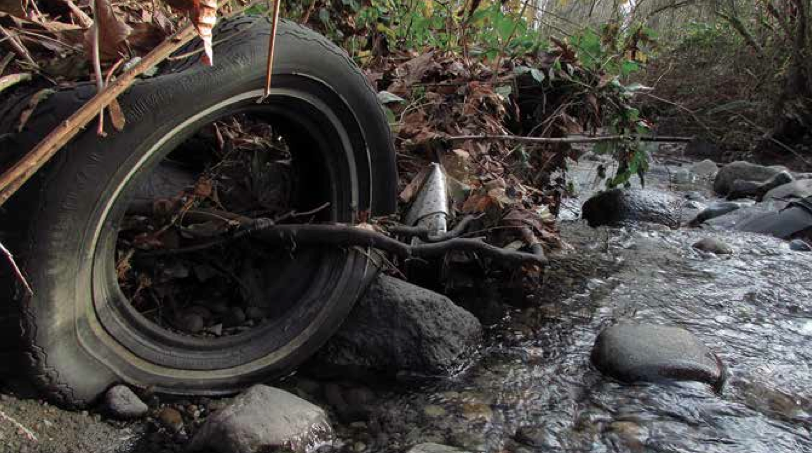 After Coho salmon returned to Hyland Creek streams in Surrey, B.C. to spawn in November 2012, I noticed many pieces of trash in and on the sides of the streams: cigarette butts, beer cans, cups, old furniture, clothes, plastic bags, fans and other materials.

Sometimes the stream is clear, but although the stream looks clear it is not clean for the Coho to return to spawn, or for the smolts to grow up. The salmon live in the stream almost a year, swim into the Serpentine and Fraser rivers, into the Pacific Ocean, live, eat together in schools and then return to where they were born in the small streams in Surrey and elsewhere in B.C. The cycle continues.

As a test in April 2013, I walked to King George Boulevard, west of the area of the creek where we live, to see how the fry thrive in the streams. At King George Boulevard I noticed a white gooey film on brown rocks. No small fry. At the same time as I walked beside the stream, I saw all kinds of garbage. I saw a huge chair stuck in the middle of the stream. I pulled it out.

This summer in 2013, more than the fall and winter at the creek, I noticed lots of beer cans and cigarette butts in the streams.

Regularly I checked the smolts to see how they do. I went to view the smolts at a location. The water looked like whitish milk in the water. When I first viewed the big coho salmon in November and December 2012, I saw suds and bubbles flow, too. Big coho salmon drank and lived in that water.

Once at the end of July, I attended an environmental group’s meeting at Tyne Head Park. A group leader brought kits to test stream waters for bacteria, phosphates, turbidity, nutrients and temperature. I told the group leader I saw suds at a stream where coho smolts live nearby. It is typical to happen as streams get closer to houses where people live, she said.

People trash that small park in the streams where the coho smolts live and swim. Why such irresponsibility from people? Parents play a huge role to teach children to pick up garbage rather than throw stuff onto streets or in nature.

As I have walked down streets in Surrey and Vancouver, with my own eyes I have seen people throw bags out car windows onto the highway and alcohol bottles onto the pavement.

People do not care. Definitely something is wrong to pollute the world wide and in Canada, especially in Surrey, B.C. where the coho smolts live in the streams. Could this also be why the salmon return less and less each year? I have seen it. I have shot pictures of it. Why not make salmon an endangered species before it is too late?

Someday, the cycle may not return if we do no clean up our act.