join us donate
LOG IN or SIGN UP
Liquid syntax error: Error in tag 'subpage' - No such page slug join
find a vendor
December 14, 2011 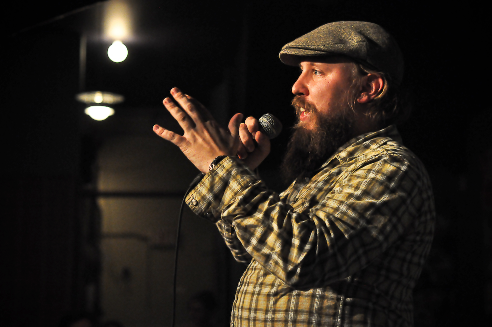 Being a comedian is probably not the most effective way to obtain worldly riches. Unless you’re a Bill Cosby or a Jerry Seinfeld (or some other hipper, more contemporary mega-successful comedian working today), chances are that big payday won’t come through, at least not in a long running television network sitcom, the comedic equivalent of hitting the jackpot. No, these days, making the money by being funny requires loads of performing and writing, otherwise known as a lot of hard work.

That’s what makes Vancouver comedian Graham Clark such a remarkable guy: he gives up his talent for free, for those who need it most. And over the past couple of years, Megaphone has been one of the lucky recipients of Clark’s generosity on a number of occasions. That includes performing at last year’s fundraising event for Megaphone, contributing an article, and making donations.

“I think very highly of the work Megaphone does,” Clark says. “And the empowerment it gives the people involved.”

Those familiar with the local comedy scene will surely recognize Clark’s name from his hugely popular and hilarious podcast, Stop Podcasting Yourself (which he co-hosts with Dave Shumka), his regular turn hosting the Laugh Gallery, a stand-up comedy show tour-de-force that brings various comedians of local and national renown to the stage in a single night and from his writing on CBC Radio’s “The Debaters”. And if they don’t recognize the name, then surely they recognize the beard. 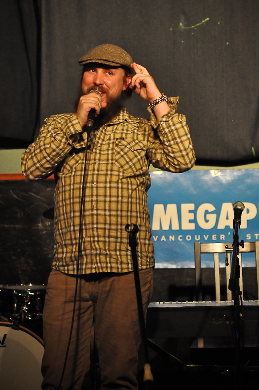 In spite of his success as a comedian, it’s often Clark’s beard that gets the spotlight. Maybe it’s because of his unintended fame from creating his so-called beard paintings. After friends suggested he use his prodigious facial hair to craft paintings, Clark took the joking to heart and whipped up an abstract, slightly messy looking piece (think of someone using a brush wrong-handed) and put it up for bid on eBay with the intent of raising money for a friend who was seeking alternative cancer treatment.

The piece sold quickly, as did the many others that followed, the proceeds being directed to the person or organization Clark felt in need of funds at the time. Soon he had put enough paint to canvas—and in the process vastly improved the quality of the paintings—that he was able to hold his own show at Little Mountain Gallery this past September. The twist: those who bought a piece could choose what charity the money went do from a list provided by Clark. It was a huge success.

“People wanted to buy the painting, but they also wanted to say where the money went,” Clark says. “I think people really got into that. They really took the time to decide what charity they had a connection with.”

That included a sizable donation to Megaphone from the sale of one piece.

“Giving to a grassroots organization like Megaphone, you know exactly what the money’s doing,” says Clark. “You can feel the connection to that.”

Graham Clark will be performing stand-up at the Comedy Mix (1015 Burrard St.) from Thursday, December 15 through Saturday, December 17. Visit TheComedyMix.com for tickets and showtimes. Clark also hosts the New Year’s Eve edition of the Laugh Gallery on December 31 at the Cambrian Hall (215 East 17th Ave). Tickets $25 at Neptoon Records.