join us donate
LOG IN or SIGN UP
Liquid syntax error: Error in tag 'subpage' - No such page slug join
find a vendor
April 18, 2015
by Jessica Hannon follow this author

I woke up to the sound of sirens on Monday. More than a passing cry in the night, they sounded like they were rallying from all over the city to arrive at my doorstep.

I pulled back the curtain to see 60-foot orange flames rearing up over an abandoned building a half block away, a giant roaring bonfire spitting sparks hundreds of feet into the air. It was terrifying. Thrumming with fear, I woke my neighbours—my first instinct was get as far away as possible.

By 4 a.m. the fire seemed to have diminished, beaten back by the tireless work of a crew of 55 firefighters on scene. My thanks to them for keeping the neighbourhood safe. But this fire left a tragic loss—two homeless people died in the blaze.

In the days following the fire, community members and Global reports revealed that the two bodies recovered from the ashes belong to a middle aged woman and her adult son, believed to be homeless and squatting in the empty building. The memorial for Louise Spence and her son Norbert is a lonely, heartfelt bit of colour on the fence surrounding the burned out lot. 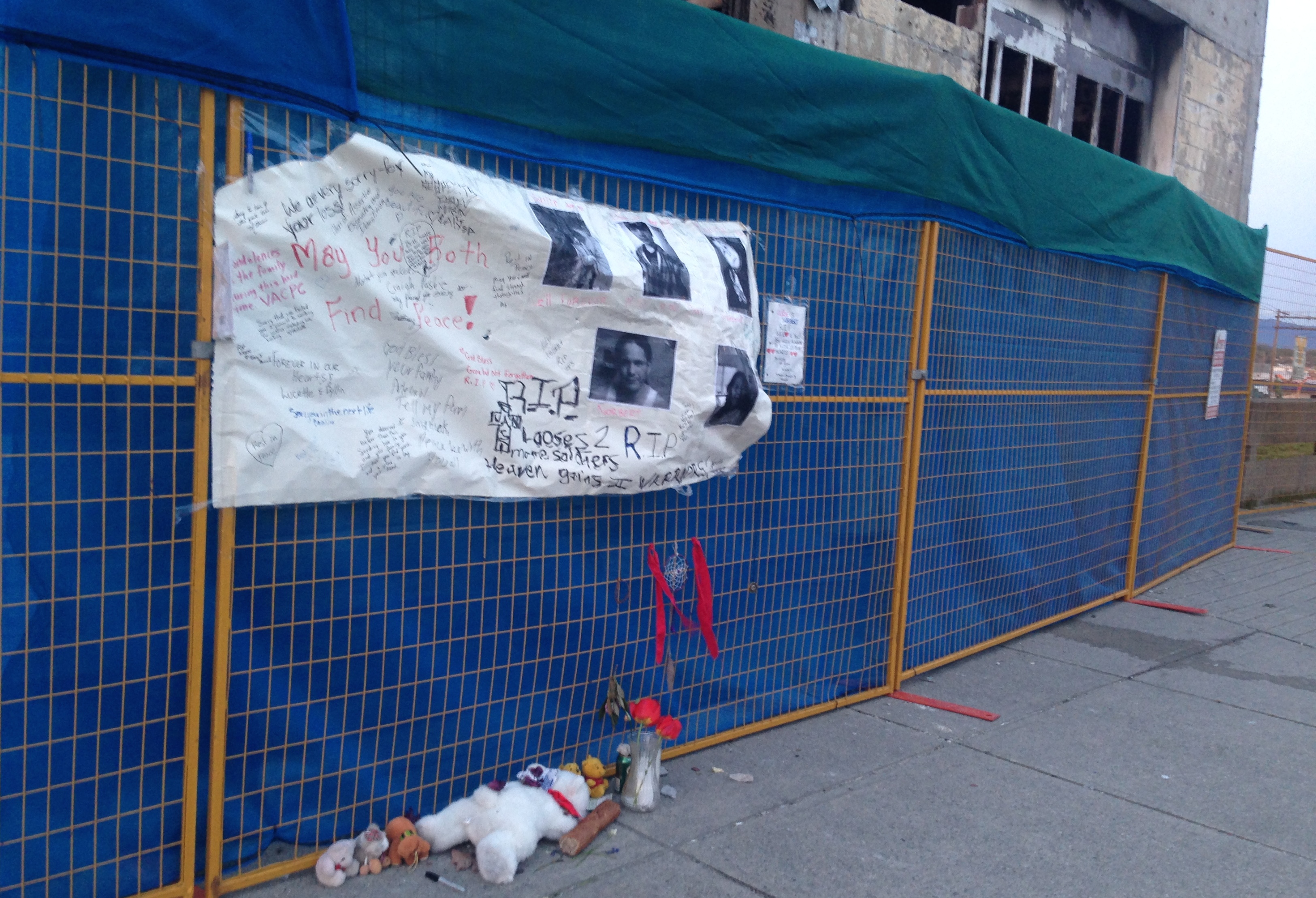 Hanging from a window ledge, Simona Marsh and Greg Pushie escaped and were rescued by fire and police officials. According to CBC, they were “visiting their friends who were squatting in the building when they were woken up by a explosion on the ground floor…[they heard] the screams of the other woman, aged about 50 and her son, aged about 30, who were trapped inside.”

The building they narrowly escaped from was slated for demolition as part of plans for The Wall Group/Rennie Marketing Systems “Strathcona Village,” a mixed 12-storey condo development at 955 East Hastings. Strathcona Village is controversial—a shiny, Rennie-polished beacon of the gentrification that has seen an influx of the young and middle-class into a tight-knit low-income community on the eastern edge of the Downtown Eastside. City of Vancouver documents state the 3-tower development will have 352 residential units: 288 units of market housing, with 70 units of city-run social housing. Reports from an Oct 2012 council meeting note that only 24 of those social housing units will be at the welfare rate.

The city feels a housing crunch. The middle-class is moving down through the housing stock as their ability to find affordable housing weakens. The squeeze on the lowest income citizens in Vancouver intensifies, and homelessness in our city stubbornly digs in its heels. Last year’s homeless count found 2,777 people without homes in Metro Vancouver, 1,803 in the City of Vancouver alone.

We find ourselves in 2015, facing down the same cruel injustice that impelled Mayor Robertson’s 2008 promise. The City of Vancouver homeless count took place last month, and preliminary numbers are expected within weeks. Housing advocates and city hall estimates both appear to predict the number of people living on the streets and in shelters will increase, or at least remain steady.

This all seems symbolic in a way that stings. We wrestle now not only with the very human tragedy of two lives needlessly lost, but also with the story of lofty promises and half-measures, of injustice and stark inequality.

Mayor Gregor Robertson’s 2008 campaign wove in the story of Darrell Mickasko as a catalyzing event, pushing him to run for mayor on a hopeful platform—ending homelessness in Vancouver. Darrell burned to death trying to stay warm on a freezing night in January 2008.

“[Darrell’s] death—and he’s one of many who’ve died from homelessness in Vancouver—cannot be in vain…My goal is to end street homelessness by 2015 in Vancouver,” he told a Tyee debate crowd in 2008.

Now, in the year that Mayor Gregor Robertson promised to end to street homelessness it is with cruel irony that two people without homes have died needlessly, violently, in the very place where homes will soon be built, though the vast majority of those homes would not have been anywhere near accessible to them, with only 24 units at the welfare rate.  Louise and Norbert deserved better than this.

A lack of safe, affordable housing puts people at risk. It is not only dangerous, but life threatening. Homelessness is an early death sentence. Megaphone’s 2014 report “Dying on the Streets” found that the median age of death for a homeless person in BC is between 40 and 49. Compare that with the average BC life expectancy of 82.65 years. Almost 48% of homeless deaths in BC between 2006 and 2013 were by accidental means—preventable deaths. This is compared with 18.3% of general population deaths in BC. We should also take solemn note that the victims of this fire were indigenous, a group grossly overrepresented in Vancouver's homeless population, a legacy of the ongoing impacts of colonialism.

If we continue to leave people out in the cold, these two most recent names on the list will not be the last. 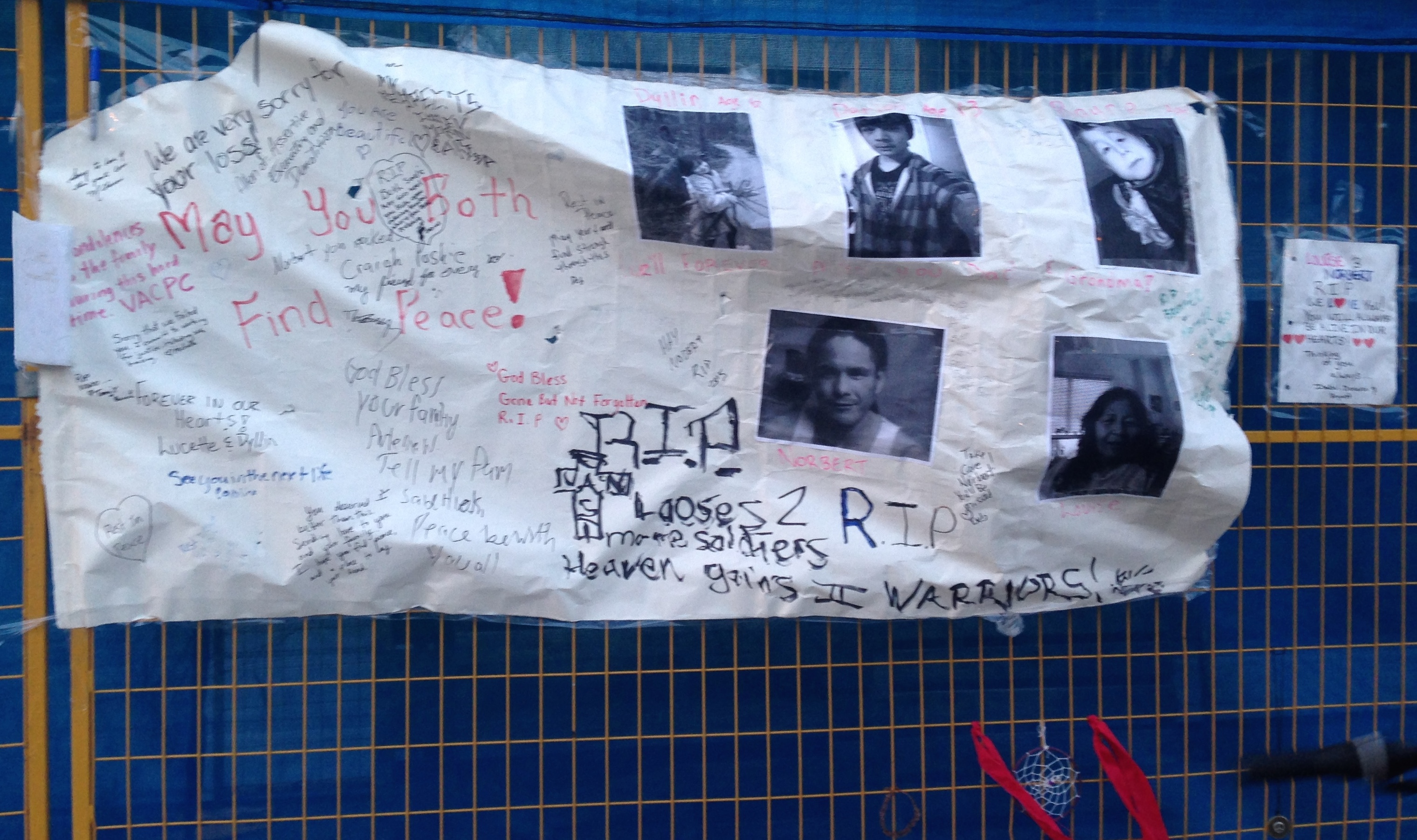 Our hearts break for Louise, Norbert, and their loved ones. They deserved better than this injustice. We lay these deaths at the feet of the federal, provincial, and municipal governments and ask how many more deaths it will take to spur decisive action. We must decide as a community, that what our governments have done up until now is not enough, and that they can and must do better.

I found some solace that night as I stood with my neighbours and watched the heat lick the sky—it’s an abandoned building, nobody is in there, we assured ourselves. We are afraid, but we need not worry, we are all safe. We didn’t know then that two of our neighbours were not.

Governments must be bolder and braver and do the one thing we know will make a difference: build safe, affordable, housing. And it must be done now.