join us donate
LOG IN or SIGN UP
Liquid syntax error: Error in tag 'subpage' - No such page slug join
find a vendor
April 04, 2011 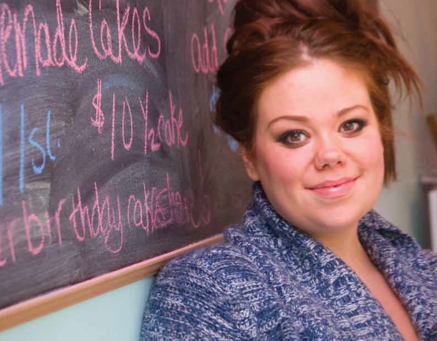 The day I met Amanda Bonella wasn’t her best day, but it certainly wasn’t her worst, either, considering the obstacles she’s had to overcome.

Bonella is the owner of Yogiberry, a nook of an ice cream parlor turned soup and sandwich shop that sits between Hastings and Cordova on Carrall Street.

The day before our interview someone robbed her and stole her rent money while she was locking up shop. And while she was frustrated with the situation, and that it wasn’t the first time it had happened, her fiery attitude was still showing through.

But it’s really her charm, the way she engages with her customers and carefully chops each vegetable on a custom order gluten-free homemade pizza that has people coming back to enjoy her “delish meets nutrish” food.

Yogiberry is located in a cheerful spot of the Downtown Eastside, with bright pink walls and iridescent glass tile countertops. But it’s not the easiest location from which to run a business. Bonella is constantly cleaning the entrance outside, sweeping it of needles, garbage and whatever other trash had been left behind while the store was closed.

But she’s a long-time resident of the area and doesn’t want to be anywhere else. The topic of gentrification comes up in conversation and her perspective is as refreshing as her real fruit smoothies. “I don’t want the neighbourhood to change, I love this neighbourhood and how colourful it is,” she says.

At the same time, though, she feels that the residents have to step up their level of respect for the businesses as much as the businesses are demanded to consider the needs of the people who were living there first. “I don’t like this divide, but I don’t like it from either side. Everyone has to accept responsibility for the conditions down here.”

It’s a meaningful sentiment coming from her. Part of Bonella’s success is due to the fact that she’s adaptable and certainly strong willed. She describes herself as “assertive, consistent and respectful,” having lived many lives to get to where she is today—happy and safe with her daughter by her side.

She’s open about her life, about the fact that she was raised in foster homes, some of which were abusive, and that she was recruited into the sex trade when she was a young teenager. She avoided drugs so never had to deal with that barrier when she decided to exit the trade in her early twenties after a particularly frightening date. She also had her daughter to consider by then. 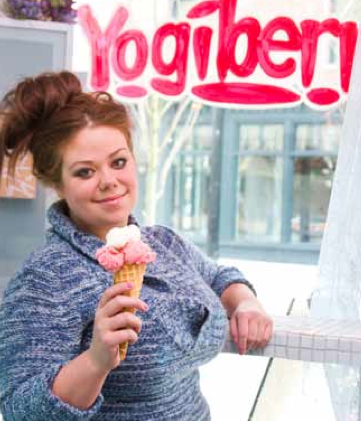 Bonella found the support she needed through PEERS (Prostitutes Empowerment Education Resource Society) in Victoria, a group of former sex trade workers dedicated to helping people exit the trade. She eventually opened Vancouver’s PEERS chapter and got involved with public education. She also started a general contracting company which she’s still involved with and whose members built the inside of her cheerful shop.

After working as support for people in the sex trade, the emotional challenge started to take its toll. “I had to leave because it burnt me out. It’s emotional on a whole other level because I come from that life and it’s very triggering,” she says.

So she moved to Bella Coola and chilled out, learning to fly fish and working as a substitute teacher. She came back to Vancouver to enjoy the Olympics—“the city can’t party without me,” she laughs—and decided to stay.

Ever an entrepreneur, she decided to open a shop in the Downtown Eastside. Not entirely sure what she would do with her little nook after she negotiated an affordable rent, she decided on ice cream. “I needed to do something that fit my ethics,” she says and sticks to principles of minimal harm by using local, organic ingredients, chemical-free cleaning products and biodegradable packaging.

The ethics go beyond simply food, however. Since opening last October, Bonella has endeavoured to employ someone either involved in the sex trade, as she once was, or trying to leave it.

And as she treats her employees without judgment, she does the same with her customers, a necessity in this neighbourhood. The products she serves are not only of high quality, but affordable, too—sandwiches are $4.50, fresh soups are $4 and gluten-free pizza is just $2.50 for a slice. She also offers coupons online. It can make for an interesting collision of worlds. “You’ll have a lawyer and a drug user and a drug dealer in the same lineup, not really knowing how to interact ... and it’s really funny,” she says.

While having an inclusive business philosophy might produce some mildly amusing situations, it also has its costs. Because Bonella treats everyone equally as customers, she is more susceptible to the unpredictable behaviors that the drug trade unleashes like theft and vandalism. She acknowledges that not everyone feels comfortable sharing space with people who are on drugs or who make a living pushing drugs.

And of her boss? “She’s a great boss. If you need anything she’s always here to help with anything at all,” Williams says. Having taught herself how to design websites, Bonella will still take on the occasional contract to make sure that her bills are covered—the winter months have been slow for a shop that began selling ice cream. She’s not worried, though. She’s got a knack for rolling with the punches.

“I’m not someone who resists change,” she says. “I want to be a part of the change, especially when it’s for the better.”