join us donate
LOG IN or SIGN UP
Liquid syntax error: Error in tag 'subpage' - No such page slug join
find a vendor
March 24, 2020
by Paula Carlson follow this author
photos: Alex Sandvoss (above) is a self-taught artist who uses her talents to raise awareness of social and cultural issues. Photo provided.
feature 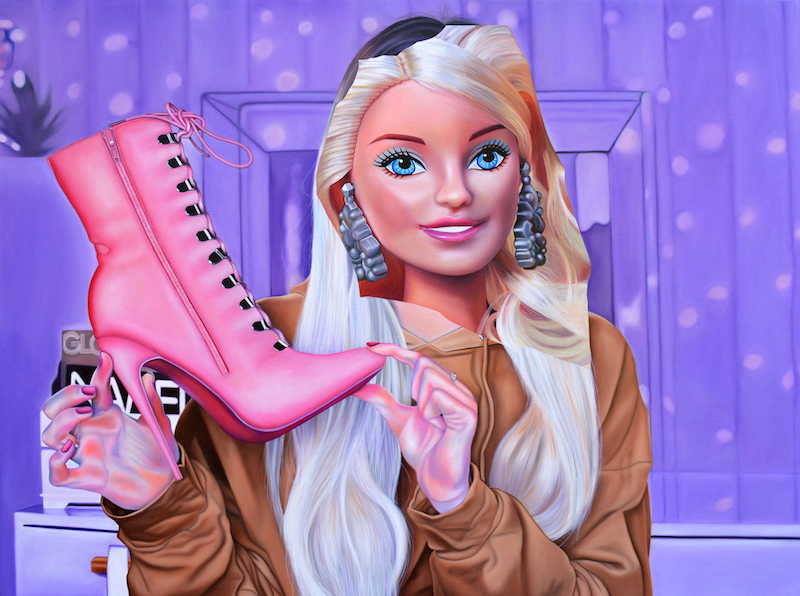 Artist Alex Sandvoss trains her creative intelligence on the people we pay too much attention to: social media influencers who dictate our desires to the detriment of the planet. Image provided by the artist.

In her debut public exhibit last year, artist Alex Sandvoss focused on The Faces We Pass By Every Day, using her talent to capture society’s most marginalized on canvas.

The striking, life-like paintings of homeless and low-income individuals in the Downtown Eastside—including several Megaphone vendors—aimed to depict the “strength, dignity and beauty” of the folks most people pass by regularly without any thought or interaction.

With her latest series, Sandvoss turns that idea “about 180,” training her creative intelligence on the people we pay too much attention to every day: the social media influencers and fashionistas who dictate our desires and direct our purchases.

The Influencer showcases not only Sandvoss’ formidable talent, but also shines a light on how the fashion industry is degrading the planet and contributing to climate change.

The collection features a series of oil paintings that take a satirical look at how, in the modern world, so many people are obsessed with their physical appearance and material goods. The paintings offer a social commentary on the role of social media influencers and climate change, how people are complicit in perpetuating the situation by being consumers, and how we could all do better.

“It’s so easy to be manipulated and [with] even just awareness of that comes the ability to change,” says Sandvoss.

She points out that dyeing and treating textiles uses many toxic chemicals—which are later discharged into lakes, streams and oceans. Total greenhouse gas emissions related to textiles production are equal to 1.2 billion tons annually.

“I just want to raise awareness on the impact fast fashion has and I know lots of people just don’t really know what’s happening, or are a little bit ignorant of the ethical price we are paying for fashion,” she says.

She walks the talk: Sandvoss hasn’t bought any new clothes for four years.

“Save for shoes,” Sandvoss says. “Everything else has been second-hand. I do that because of some of the things I’ve read… it takes 2,000 gallons to make a pair of jeans and in 2018, 4.5 billion pairs of jeans were sold worldwide.

Just the amount of water and pollution that goes into that alone—people often feel helpless when it comes to the environment, but just like influencers, we have more power than we realize.”

The Influencer features renditions of real social media personalities on YouTube and Instagram, their faces obscured with the insertion of a recognizable doll.

“I chose Barbie as the face of this collection because I feel like she is our capitalistic heroine,” Sandvoss explains. “I also wanted to block out the faces of the influencers with a cut-out Barbie because I didn't want the statement to be that these girls ‘are’ Barbie, but rather that they become anonymous and masked—sort of losing their authentic identity due to their YouTube persona and this curated culture. Plus, dolls are about role playing, and that is a metaphor for their role as pawns in the advertisement industry.”

In one painting, a picture-perfect “Barbie” holds up a bright orange high heel, her nails impeccably manicured and her face set in an vacuous mask of happiness. In others, the blue-eyed, blonde-haired plastic idol is superimposed over Renaissance-style scenes. 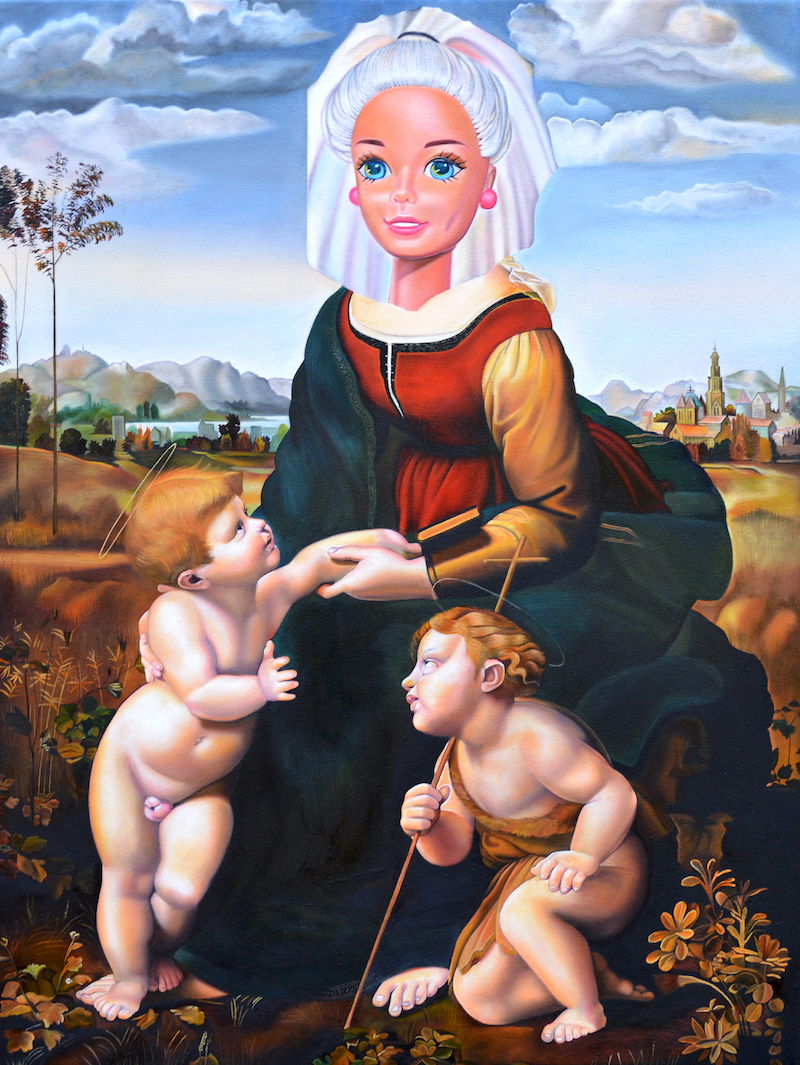 “Pasting Barbie over the Madonna… I wanted to use iconography as a reflection for what the worship of influencers, capitalism and social media represents,” Sandvoss says.

The Influencer includes nine of Sandvoss’ paintings in various sizes. Sandvoss paints so meticulously with the smallest of brushes, that her works are more like photographs than paintings.

Just as Sandvoss aims to highlight injustices in the world through art that tells a story, her own tale of how she came to be an artist is also remarkable. Sandvoss, 25, has no formal art training (although her mother and grandfather were both art teachers). She discovered her natural talent for painting while studying for a music degree at McGill University in Montreal.

Initially, Sandvoss used painting as a release from the pressures of school, but she quickly discovered that painting was the art form she communicated in most honestly. After completing her degree, she moved back to B.C., and took a job at Opus Art Supplies, an art store in downtown Vancouver. It was during this time that Sandvoss was inspired to amalgamate her painting skills with her connection to social issues and she began work on her first project, The Faces We Pass By Every Day. Several of those paintings were sold, including one that now hangs in Vancouver International Airport—a portrait of Megaphone vendor Rodney McNeely.

Sandvoss says that exhibition and The Influencer are linked.

“My two [art] shows were kind of connected in a way. My last project was about people who become invisible because they’re ignored by society, and this project is about people who are centre of attention. And I want to explore what is it about us as society that gives these people our time and energy, while marginalizing others.”

The Influencer, an art exhibit from artist Alex Sandvoss, was on display earlier this year at the Place Des Arts in Coquitlam. Learn more about the artist at alexsandvoss.com. Follow her on Instagram @sahdahtay