join us donate
LOG IN or SIGN UP
Liquid syntax error: Error in tag 'subpage' - No such page slug join
find a vendor
March 26, 2021

Flipback Friday: February 2021: Crazy About You! 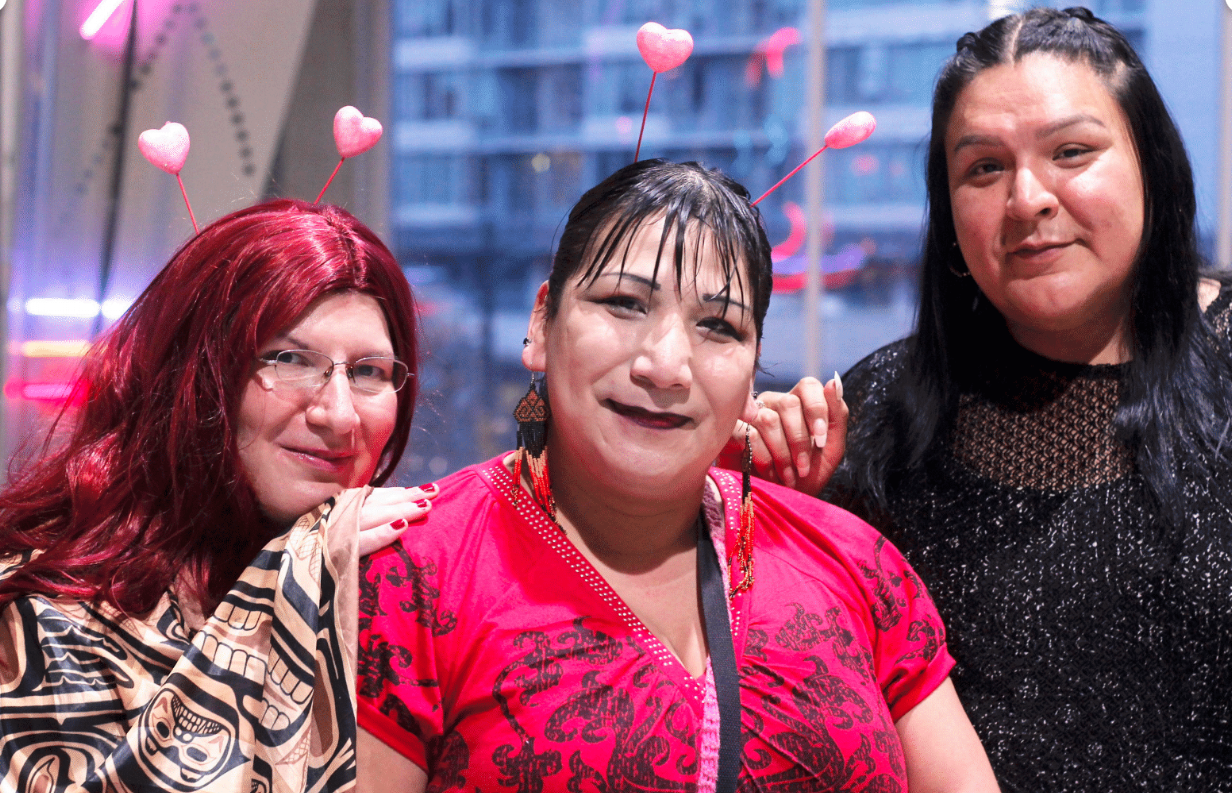 Story and photos by Michelle Gamage

Friends for More Than 14 Years

The three women “hallo” to one another as they meet up in the food court of International Village Mall, better known as “Tinseltown.”

They fall into an easy rhythm, equal parts listening, poking fun, and laughing. It's obvious from glancing at the group they've been friends for a longtime—about 20 years, says Sekani Dakelth.

"I knew Suzanne back when she wore overalls. Overalls," she emphasizes, her teasing eyes flicking to her friend.

Back then, Sekani thought she was Beyoncé," she teases back.

The third friend of the trio, Louise Boilevin, joined the group a few years later. Sekani had been making her opinion known on wearing bows: they're only acceptable on 10-year-olds. Louise, with a big bow in her hair had heard her, had turned around and said, “Hell- O - Ooo.”

The three women whoop with laughter at the memory.

"We started as friends, but friends grew into sisters, and now we're each other's family," Suzanne says.

If these three women are family, then Suzanne plays the role of youngest rascal. She's constantly slinging deadpan jokes, which she'll deliver, wait a beat, crinkle her eyes with a smile, and utter her signature: "Just kidding.”

"Hey remember when Sekani dressed like an old woman?" she asks Louise.

Sekani tosses her long hair over her shoulder with a flick of her wrist. Were the three related, she'd be the oldest.

"Oh my God, do you remember that guy I dated who liked me because I dressed like an old woman?" Sekani giggles.

Louise sits comfortably between her “sisters.” Today she's wearing a magenta wig that falls almost as long as Sekani's natural hair. The magenta is a near match to the shade Louise usually dyes her hair, but that colour requires a lot of bleach, she explains with a roll of her eyes.

Without planning ahead of time, the sisters have made a pattern with their clothes. Suzanne's black hair is in a bun and her outfit layers vibrant reds. Louise is the opposite, with magenta hair and layers of all-black clothes. Sekani bridges the middle, with grey-scale patterns and dark hair tumbling down her back.

The sisters met in women's groups when they were working on transitioning away from street life in Vancouver's Downtown Eastside.

"We were leaving the streets and making a new life together," Suzanne says.

Louise chimes in: “I got a lot of advice from the two of you... about relationships, about life on the streets, about men. About how to meet Native guys."

"I told her to stop dating guys who are always getting deported. Now she only dates Native guys." Then her eyes crinkle: "Just kidding."

The sisters have loved and supported one another through it all—from drug use to pregnancies, failed marriages to sex work.

"We lived through it so we could understand what each other we're going through," Suzanne says. "We've grown up together."

They stay close by spending time with each other. Dinners, guy-watching, celebrating birthdays—it's all about putting in the hours.

And, like any family, they keep each other in line and encourage their sisters to grow.

"Nothing is good 100-per-cent of the time," Sekani says. "Sometimes being a bitch is all a woman has left in the world."

The sisters will call one another out, even if it means having to fight. Knowing your sisters will always push back keeps you on your toes, Sekani says. And after each disagreement, the women are closer than ever.

"If one of us pouts, we all pout," Suzanne says.

Then it's up to everyone to apologize, or forgive and make up.

Creating a family like this—by choice rather than by blood—is how a lot of urban Indigenous people build their families, explains Suzanne, a member of the Nlaka’pamux Nation.

Sekani, who belongs to Tl’azt’en Nation, nods in agreement. Sometimes the family you're born into have too many problems to give you the support you need, she says. So you build your own support system.

When the novel coronavirus broke out, the women decided to form a bubble and maintain contact by having dinner together whenever possible.

"My sisters have gotten me through the pandemic," Suzanne says. "Without them? If I was alone this whole time, I’d go crazy."

Cooking for one another has been a treat and a challenge. When Louise, a vegetarian, visits Suzanne's house,she's given the choice of rice or bannock—plus the most delicious salad you've ever had, laughs Sekani.

The women agree: It's handy when your best friends are also your family.

When asked if there's a secret to maintaining a loving relationship that spans decades, they collectively shrug.

"Wait, are we together because no one else likes us? Or because we don't like anyone else?" asks Suzanne. "Just kidding."

The afternoon wears on and the women get ready to part ways. They stand to say their goodbyes. "I love you," they tell one another. They pause, checking everyone's grabbed the right purse, then amble to the elevator—matching each other's pace, still chatting animatedly, and making each other giggle as they go, as sisters do.