join us donate
LOG IN or SIGN UP
Liquid syntax error: Error in tag 'subpage' - No such page slug join
find a vendor
July 30, 2011 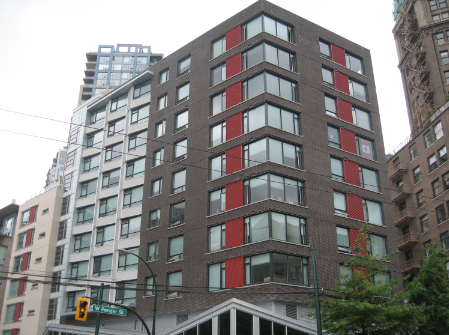 More than a year behind schedule, the first of the 14 supportive housing projects on city land officially opened yesterday in the Downtown Eastside.

Located at Pender and Abbott streets, Sorella—which means ‘sister’ in Italian—is a 10-storey building with 108 units for women, a garden patio, a computer lab, bike storage and bedbug decontamination room.

"Sorella will give women and children a safe place to call home," said Rich Coleman, B.C.'s housing minister, at the event celebrating its opening. "It will allow women expecting children to be able to keep those children, because their lives will be stabilized."

The 14 supportive housing sites were announced in 2007 and were initially supposed to open before the 2010 Winter Olympics as part of a $400 million project between the city, province and federal governments. Six of the other 14 projects are scheduled to open at the end of this year.

Almost overshadowing the Sorella’s opening, Coleman and Canadian Heritage Minister James Moore announced at the event that the province and federal governments have made a three-year $180 million funding commitment for social housing in British Columbia.

But while some local politicians and housing advocates criticized the $180 million as both a “re-announcement” and too little funding, the Sorella will at least provide more than 100 women and children with a new and affordable home.

Managed by Atira Women's Resource Society, the $27 million building has a diverse mix of residents. According to Atira executive director Janice Abbott, women as young as 19 might live next door to women in their 60s. Some have battled addiction, others mental illness, but all have lived in poverty.

Abbott said she hopes to start a volunteer grandparent program where older residents can help young new mums adjust to motherhood. Sorella's third floor is designated for pregnant women, and over the next four months, 12 brand new babies are expected to arrive.

For one resident, who wished not to be named, living at the women-only Sorella has already helped get her life "back on track."

Before moving into her new, airy apartment in early June, she lived at The Rice Block hotel and battled addiction. At Sorella, she's met supportive neighbours who've faced similar struggles. She's also been able to update her resume and start job hunting.

"I want to work and put all of this behind me," she said. "I've learned so much living here."

The City of Vancouver donated the land, valued at $2.6 million.

"We have a very bold and ambitious goal to end street homelessness in Vancouver by 2015," said Mayor Gregor Robertson. "It's not an easy thing in the city of Vancouver to access low-cost, affordable housing, but these are the opportunities being created to make sure that we fill those gaps."

As part of that goal, the City recently pledged to build a total of 3,650 supportive and social rental housing units over the next three years (with 1,950 units as new housing units).