First Pitch, Second Chances: Megaphone vendor Kris Cronk gets back in the game 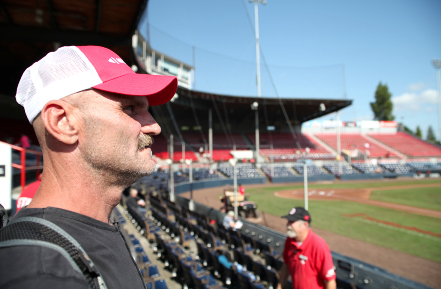 Kris got to throw out the pitch because he won a contest for Megaphone vendors that asked them to submit their best sales pitches. Kris’ pitch, “Megaphone: often imitated, never duplicated” was voted by other vendors as the best. Below, Kris describes the day and what it meant to have the opportunity to get back into the game.

As I approached Nat Bailey Stadium I could feel the excitement build with every step. I had never been to such a nostalgic sports venue before. Affectionately known as “the Nat”, the stadium was built in 1951, originally named Capilano Stadium after a local brewery. It was renamed Nat Bailey Stadium in 1978 after Nat Bailey (Da!), a man who loved baseball so much that he spent his life promoting the game everywhere he went.

As the crowd mulled outside the stadium, I noticed a familiar face, Pastor Drew. He heard I had won the contest and wanted to support and encourage me. He was a welcome sight. When the doors opened I was directed to customer service where I was informed that there would be four people throwing ceremonial pitches today, including two small boys, which took the pressure off a little. 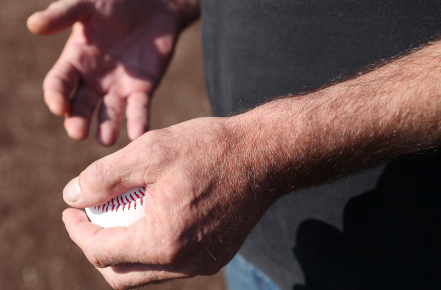 The day before the game I did an interview for the Metro newspaper and mentioned that it would be “icing on the cake” if I could get a ball signed by the Canadians players that I could give to a child as I left the field. When I was handed the ball I would throw, I asked the girl at the counter if it would be possible to get the ball signed by the team. She began to tell me how difficult that would be, but before she could finish a young man stepped up and introduced himself as Andrew. He said he had read my request and taken the liberty to get every player’s signature on a special ball.

I was at a loss for words as Andrew presented the ball to me. When the moment approached, we were escorted to the field and as the four of us stood against the fence I felt my anxiety diminish subtly. I bent over to the smaller of the boys and wished him luck, and then we marched to the mound. As each pitch was successfully thrown over the plate I felt more relaxed.

I topped the mound to take my pitch and could barely hear the drone of the announcer introducing me. I took a deep breath, wound up and made my pitch. Having had a few surgeries on my spine, I wasn’t positive I could get the ball to the plate, but it did reach the plate. Success. 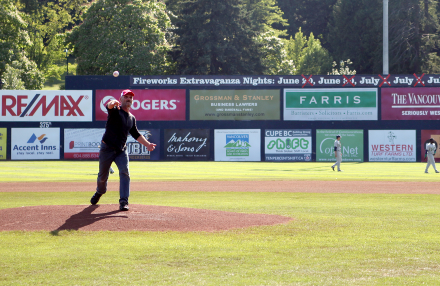 As I was leaving the field, I saw a small boy sitting with his dad, who for some reason looked a little sad. I approached him and pulled out the ball Andrew had gotten signed for me and said, “Young man, I had this ball signed by the entire Canadians team and I want you to have it.”

His eyes widened and jaw dropped. He looked at his dad, then back to me and thanked me. His face had changed from when I first saw him. He had the widest grin on his face and was laughing out loud. He was back in the game.

The funny thing is that when I gave that boy his new outlook on the game, I realized that winning the contest had brought me “back in the game”. Not only on this special day at the ballpark, but ever since I started selling Megaphone, I have felt part of my community where I sell.

I looked around the ballpark and saw four of my customers in attendance. As each of them congratulated me, I felt equal to them. There were no class differences. No longer them and me, but us—just a group of people watching the game.

I want to thank the Vancouver Canadians and everyone who made this day possible at “the Nat”. A special thanks to Andrew, for helping a small boy get back in the game, which in turn brought me back in the game. Thanks to all the people on my corner who support me daily with their kindness, including the Canadians’ 50/50 girl who I see daily, everyone at Megaphone and my fellow vendors.

And finally I need to thank baseball for once again showing me the way.