join us donate
LOG IN or SIGN UP
Liquid syntax error: Error in tag 'subpage' - No such page slug join
find a vendor
June 05, 2013

Five minutes with Voices of the Street 2013 contributor Peter Kryszkiewicz 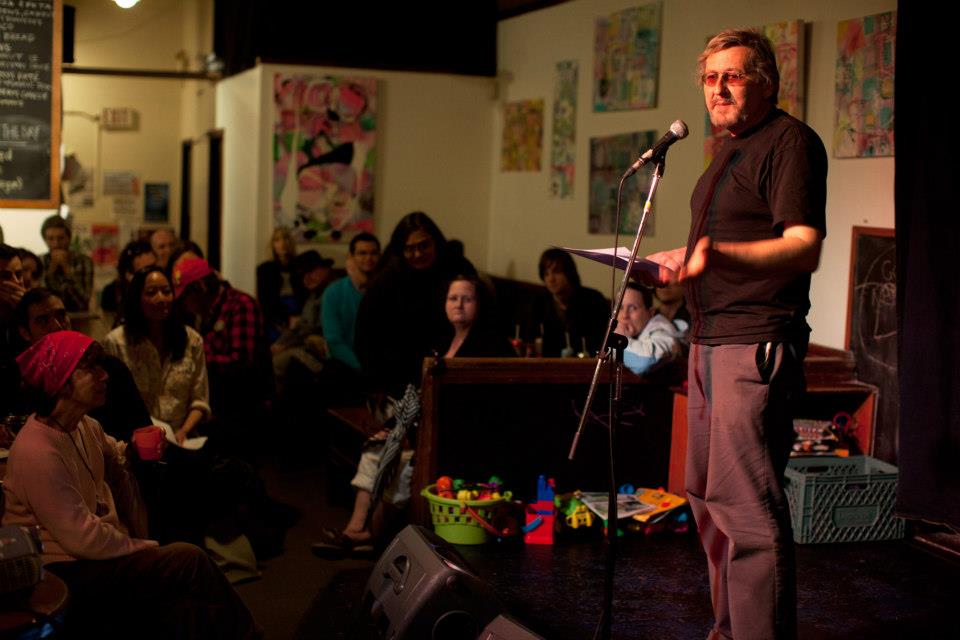 Peter Kryszkiewicz reads his work at the 2013 Voices of the Street launch. Photo by Adam Krawesky.

"I spent most of my early adult life in the Yukon, and I was an extreme skiing and mountaineering guide up there and I used to write articles for Alaska magazine. Wrote quite a few features for Alaska, and then had a long hiatus, and in the last 3 years I've gotten intereste in writing again. So I've written 3 novels, and since I've been living on the street I haven't had the postage and stuff to package up these manuscripts and try to sell them. So because of Megaphone's writing workshops, they've got me started again with this whole idea of getting my writing published.

My story in a nutshell is that I was living in a bear's cave near Vernon,  I was clean, happier than hell. I went to the john Howard Society shelter just for a shower. To make a long story short, I caught 20 guys in a room together taking their socks off at the same time, no ventilation, I almost got pneumonia - horrible experience, I had to come back to the Downtown Eastside. I started using drugs again, and ended up at Onsite.

Shannon Rayne was facilitating the workshop there, and I wrote a 10-minute piece and it got published. I said, "Wow! I wrote a 10-minute piece and got paid $25, you know, that's not bad for 10 minutes' work!" So Shannon started me off with this whole thing, and I've bene writing with Megaphone ever since. I started selling the magazine as well, and it's the perfect business for me. I'm independent, a free agent, living in the mountains, and I've got this old growth forest by Mount Seymour as my background, you know - and I own it, until somebody finds me. [smiles]

The workshops have taught me that there's really no such thing as writer's block, really. A blank piece of paper is like a ball of thread - you just find the end, and pull on it, and the whole thing unravels. These 10 minute writing blitzes they have - it's amazing what you can do in 10 minutes just because you have a start. Yeah, you could have writer's block, and stare at a blank piece of paper for years, and when somebody like that comes along - the facilitators - and they actually get you to start pulling on that thread, then away you go."

Affordable Housing with a View

Oh, to dive into the abyss! Heaven or Hell, who cares. At the bottom, to find the new.

Between heaven and earth—the 10,000 things. The Taoists say this is the source of our discomfort, the discomfort known as the human condition.

Well, my math was off that day. In my drug-induced enthusiasm to equate the 10,000 things to zero, thereby leaving the human condition with no millstone around its neck, I got naked. I walked as nimbly as I could through the deep dark forest, feeling the good earth beneath my feet, luxuriating in the warmth of the sun irradiating every part of my body. Living in the moment.

My brain recovers from another respiratory near-failure. That moment passes. Soon the moments pile one on top of the other and accelerate. My window on time widens, to encompass the past 200 million years and the next 12 hours. Ah, yes! There’s a reason why the couple in the Garden got clothes, and the wake-up call from the snake. Knowledge! The knowledge it’ll get cold in a few hours.

And I remember. this experiment has something to do with experiencing disgust yesterday at the amount of maintenance required for basic day-to-day living. All my life support systems were failing me, the free tobacco just lying around on the ground, the free air and sunshine, all of it. Once you become a master at recycling carbohydrates and proteins out of fast food dumpsters after the dine-and-dash restaurants around town closed for the evening, what’s left? The challenge was gone. Time for a holiday.

My nth attempt at recovery found me at Vancouver Detox. There were two outstanding components of the detox experience at Van Detox—the fucking banks and banks of super-brilliant fluorescent lights you couldn’t get away from, day or night, and the women. It became quickly apparent that VD was a great place to get laid. All that hormonal energy trapped in a sedated body for months and months suddenly let loose in a flood of lusty neuro-transmitters firing away like mad, under controlled conditions.

So we learned to make do with expensive lodgings like this one with built-in respirators and defibrillators in case somebody screwed up on a Friday night and the Angels of Mercy delivered death after the angels on hogs brought deliverance, in small packages.

In a month or two, Insite would open up. There we would even have little booths we could rent for the space of an hour or so (for the price of becoming a statistic in their demographic research), clean and comfortable places to shoot up with built-in vanity mirrors, free books of matches and free coffee. Insite was like a home away from home—you could meet friends there for coffee and escape the weather for a bit. It was great.

Eventually I graduated to the next level—Harmony House. Considered the best recovery house in the Lower Mainland, Harmony House has the ambience of a small exclusive hotel. Deep carpeting in royal blues and golds, and, alas, the ubiquitous little fluorescent-lit cubicles with bed and night table that passed as a living space. The rooms weren’t much different from similar cells at triage.

But the hunting looked to be good. After I unpacked my survival kit I wandered downstairs to the main courtyard, a nicely glazed environment with an eclectic mix of garden and indoor living space, kind of like the moorish architecture in Spain. I sniffed the air. Cheap perfume!

Ah! A school of sunfish swimming in a quiet pool. Three women undulated in the pool of sodium vapour light on the balcony in the courtyard, like fish holding against an invisible current in a spawning stream, smoothing lotion unto freshly sauna’d legs, brushing attractive hair in slow, seductive strokes. two males entered the stream. I would ignore them and cast for the sunfish using my Sony digital device as bait.

“Mind if I join you?” the women all smiled and invited me in. The males eyed me as food.

“You guys all come in with this intake?” was my opening gambit.

“Yeah,” a grizzled grey veteran of the street answered for all of them.

“My name is Ron ... ” and extended my hand. One of the women brightened right up, broadcasting kilowatts of intent. Yes, she’ll be the one.

“Are you the guy with the picture?”

She’d evidently seen me in the intake line with my metre-by-metre-and-a-half canvas.

“Yup. I don’t watch TV. I prefer to dabble in the arts. I’d like to get some painting done here,” I said, deep diving into her eyes now.

“Awesome! Can I see the painting you brought in? Whenever. Whenever you have time.”

“Sure. Just knock on my door-”

“No visiting the men’s dorm. Says the rules,” said the younger of the two males.

She had grey eyes, cool as stone. Introspective eyes that drew you in, to her private space inside. I moved my chair closer to hers, turning to face her, purposely excluding the others. Damned if I was going to share this woman with the rabble now. She looked to be one of the rare human beings, something I could sense right away.

“Methadone,” she completed the sentence for me. “And you?”

“Can I see your thingy there?” she said, pointing at my shorts. “It looks like it got run over.” I laughed, realizing she meant my Sony Digital tape device.

“It did actually. I had the door of the Audi open, puking my guts out. The Sony fell out of my shirt pocket on the road. I ran over it. It survived though. Take a listen.” I handed the little jewel over to the beautiful grey-eyed woman.

“Use the remote. Here.” I slipped the earbud wire over her head, thereby giving me a chance to get closer. I smelled an expensive perfume or shower scent. Added another brushstroke in my private fantasy, a nude painting I would render in Alizarin crimson and raw Sienna, with chrome yellows for the highlights, cooled off with a touch of French ultramarine in the shadows. Ex-professional woman, I thought.

Maybe a legal secretary gone bad by involving herself in the boss’s white line fever. Nah. She’s smarter than that. But I had no idea. I would find out soon enough.

“Morphine.” I waited for her to elaborate. She just sat there, a smile growing slowly, warming my insides.

“Half-an-hour to the NA meeting,” someone came out and advised us.

“My name is Sonja,” she said. I made a note of that. Underlined it twice.

That recovery house eventually turned out to be totally unrecoverable. As a veteran cynic I expected this to happen anyways. For a while I enjoyed the gardens and the nicely tanned and professional legs that showed up there on sunny days.

Sonja and I welded a good friendship in less time than it takes to strike a match. I was right, she was a professional in a previous life, a former ER nurse. She took a liking to me because I wasn’t as obviously brain-dead as some of the other inmates. I told her I was a quantum physicist with a degree in electrical engineering as well as an artist and mountain climber.

What attracted me to her was her total acceptance of this. Most people couldn’t believe I had that much education and that it was so broadbased, and when I showed them my degrees, most people probably secretly ridiculed me for blowing this advantage so obviously. I don’t blame them in a way, for asking themselves what’s wrong with this picture? Why isn’t he successful then?

A nuclear physicist recreating with speedballs in the Downtown Eastside?

Peter is a participant in Megaphone's community writing workshops, and sells Megaphone at  in Vancouver.

This spring Megaphone needs to raise $12,000 to keep the voices of the Downtown Eastside strong. Please show your support for our writing workshop programs by making a donation (through Hope in Shadows) here!