join us donate
LOG IN or SIGN UP
Liquid syntax error: Error in tag 'subpage' - No such page slug join
find a vendor
May 22, 2012

Food for thought: Debating a model for healthy food access 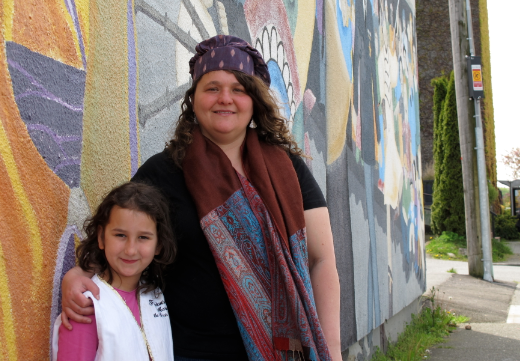 Antonietta Gesauldi and her daughter, Maria, love cooking meals together and sharing their skills through Foodwise, a social enterprise Gesauldi founded and runs. Photo by Jackie Wong.

Eating a nutritious diet is a challenge for many low-income people. In the first of a two-part series examining the right to food, Jackie Wong looks at the importance of improving access to healthy food and how it can be done.

At a sunny window table in a Hastings Sunrise coffee shop, seven-year-old Maria is demonstrating a kneading technique for making spelt pasta from scratch. The recipe is simple, her mother explains, and it’s a hit with young children. “Seven hundred grams of spelt flour, five free-range eggs. It turns out every time,” Antonietta Gesauldi says.

Gesauldi regularly teaches the spelt pasta recipe to youth in the food literacy workshops she runs at schools and community organizations across Vancouver as part of Foodwisdom, the social enterprise she founded and operates. The workshops reflect Gesauldi’s passion for fostering education and community around the preparation of nourishing, affordable food. “We’re not talking about a luxury here,” she says. “It’s one of the basic necessities of life.”

Gesauldi is a trained chef, and her creativity and resourcefulness as a cook was a saving grace during recent hard years when she was raising Maria by herself and struggling to make ends meet. She did everything she could to avoid having to access the food bank until doing so was an absolute necessity.

During that time, Gesauldi found community and opportunity in Humanities 101, a university-level liberal arts program at UBC for people who live in the Downtown Eastside and surrounding areas. The program helped her build confidence to re-visit her skills as a chef and later start Foodwisdom. Last year, she delivered food autonomy workshops to people at the Carnegie Community Centre as part of Humanities 101’s alumni programming.

The workshops aim to build a sense of dignity and resourcefulness around food in a community where many residents’ food options are limited and dispiriting. “It’s important: if we eat well, we feel good about ourselves,” Gesauldi says. “It really increases our sense of self-worth, our sense of empowerment.”

But the free food available to members of low-income communities like the Downtown Eastside is often expired or on the verge of spoil, low in nutritional benefits and full of preservatives, sodium and artificial ingredients.

A better model for better food 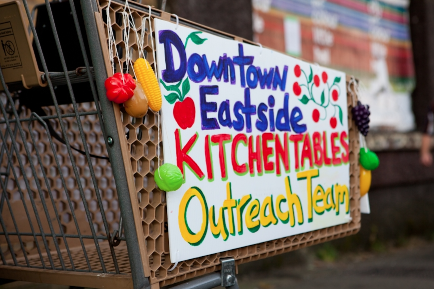 One of Gesauldi’s first pieces of advice to workshop participants is to buy a basic cookbook such as The Joy of Cooking, but she doesn’t recommend cookbooks authored by celebrity chefs. She’s in good company as she casts a critical eye on the upscale, boutique-shopping exclusivity that has come to encase much of well-heeled Vancouver’s obsession with locally produced, pasture to-table foods whose prohibitive price tags confuse healthful food as luxury, not a human right.

On the other hand, charity food programs designed to fill the stomachs of those who can’t afford such extravagances only serve to entrench what Paul Taylor calls a two-tiered food system in which quality food goes only to people who can afford it, while those who can’t are left to contend with cast-offs and substandard meals. 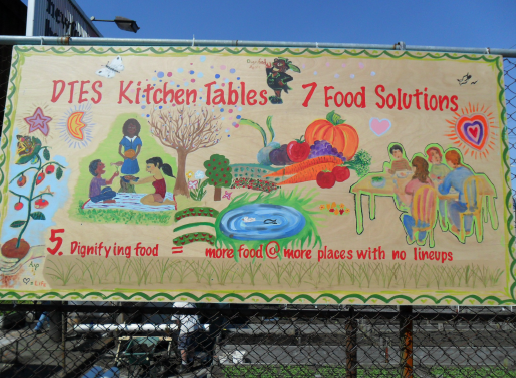 While such groups work with limited resources to serve obvious need, charity food is a band-aid solution that ultimately does more harm than good, Taylor says. It strips recipients of the ability to challenge the shame, the poor quality, and the lack of agency that accompanies the experience of standing outside in a food lineup for hours, only to receive a plate of food that is as unhealthy for the body as it is unsatisfying for the appetite.

Moving away from the charity model includes changing the way food is available to people in the community, Taylor says. The Downtown Eastside Neighbourhood House aims to reflect that goal in its programming, which includes thrice-weekly community drop-ins in which people avail themselves of a meal from the community kitchen.

The community drop-in is a casual gathering that allows people to arrive according to their schedules rather than a prescribed one. The flexible, multi-hour window in which one can drop by for a meal eliminates the need for people to wait in long lineups for food. Additionally, ingredients are listed for every dish, and the menu items are intentionally not Eurocentric as a direct response to the meat-and-potatoes fare of standard charity meals.

For Taylor, the Downtown Eastside Neighbourhood House is about “helping people recognize that they have an inherent deservedness to good-quality food.” Moving away from charity also means blazing new, non-traditional trails towards opportunities for people make their own purchases and food choices.

United front in the food fight 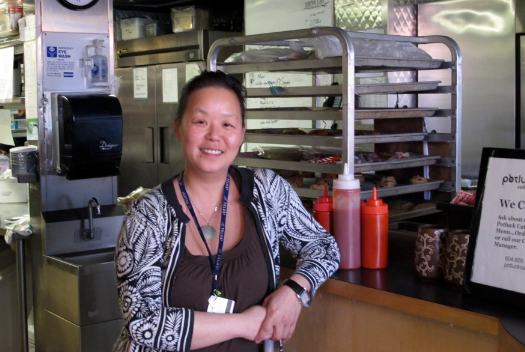 “People are hungry: give them the food. Certainly I’m not purporting that we shouldn’t,” says Johanna Li, the former catering manager of the Potluck Café who now steers the Downtown Kitchen Tables Project. “But we also need to be creating simple jobs for people. We also need to raise the [welfare] rates. If you can’t afford to eat well, you’re standing at these lineups constantly.”

Six local residents currently staff an outreach team to raise awareness of the right to food in the community. At earlier stages in the project, residents were also employed to survey other Downtown Eastside residents to create a community-led food plan.

Now, after having established nutritional and food quality standards and seven food solutions for the Downtown Eastside, the Kitchen Tables Project is in its “implementation” phase. That means Li is working to unite Downtown Eastside food organizations in a combined effort to improve the community’s food-procurement efforts while also sharpening, as a collective, its standards for food donations.

Li is now working to collect data on donation and purchasing needs from Downtown Eastside food organizations. She wants to create a united front that draws on power in numbers to replace what has previously been a haphazard approach in which charitable food organizations work in isolation from one another, failing to share resources and opportunities for collaboration.

Community organizations do not typically wish or intend to serve low-quality food, Li acknowledges. But for resource-strapped groups that rely on donations and volunteer labour, many are left with few other choices. Such sentiments have been echoed in Li’s conversations with what kinds of food people are hoping to get from donors.

“So far, out of 20 organizations, nobody has said, ‘I want more danishes and candy.’ Everyone is saying, ‘I want eggs and protein and fresh produce,’” Li says. “There’s a fallacy that we just want junk down here.”

The goal of the Downtown Eastside Kitchen Tables Project and other right-to-food initiatives extends beyond the plate. Dignifying and empowering people who have been marginalized lies at the heart of improving food in the community.

“Sometimes we have to convince people. Because they—from being marginalized for so long, being given horrible food, being told what they have to do to receive it—they feel that they don’t have the right. ‘Take what you can get;’ we hear a lot of that,” Li says. “As a human being, you have the right to healthy, nutritious food in abundance.”