join us donate
LOG IN or SIGN UP
Liquid syntax error: Error in tag 'subpage' - No such page slug join
find a vendor
February 01, 2011 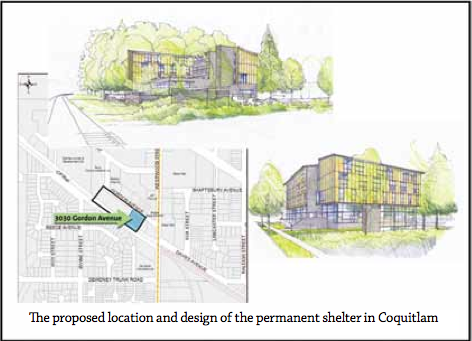 The City of Coquitlam delivered an early Christmas present to the homeless population last month when they approved a proposal to construct the first permanent shelter in the Tri-Cities area. But some residents who live near the proposed shelter site and oppose its construction feel like council has left them out in the cold.

The 24-hour, 30-bed shelter is the first year-round shelter for the area’s estimated 80-person homeless population in Coquitlam, Port Coquitlam and Port Moody, and will be constructed on the vacant lot at 3030 Gordon Ave. in the industrial area of the city—the heart of the homeless community.

“We’ve really picked ground zero for the homeless reality that we have today in Coquitlam. It’s where the homeless are,” says Coquitlam Mayor Richard Stewart. “It’s a vacant piece of industrial land next to the railway. The railway has been a bit of almost a highway that our homeless population uses to move through our community.”

There are few options for shelter in the region, with only one extreme winter weather shelter, and the Cold Weather Mat program, a temporary winter shelter program that runs from November until the end of March, bussing homeless people to a church basement every evening. When the Mat program ends, many people return to the industrial area to camp, although the majority of the area’s homeless population actually lives in nearby Port Coquitlam.

“There have been proposals for homeless shelters in Port Coquitlam that didn’t get approved, and in fact didn’t get to go forward, and some of that was because of neighbour opposition,” says Stewart. “Our staff and our council has said no, even though the problem is actually in another city, we’re treating this as a regional issue.”

Coquitlam has a Memorandum of Understanding with BC Housing to fund the shelter’s construction and Stewart is hopeful it will be announced in the upcoming provincial budget. After funding is secured, a request for proposals for a non-profit group to operate the shelter, which will also include 25 units of transitional housing, will be issued, with an aim to open by 2013.

Some nearby residents are unhappy with the shelter’s location, however, fearing it will increase crime, violence and drug use, and decrease property values. During the last meeting on the shelter on November 30, residents presented council with a 600-signature petition asking the shelter be placed elsewhere. Council still voted in favour of the shelter 8-to-1.

Garry Badour is one of those residents. He says $700 worth of extension cords and three large bags of pop cans were stolen from his backyard near 3030 Gordon Ave last week, and he fears the shelter will only compound the crimes.

“Say there are 30 now. What are we going to gain by making that tenfold?” he asks. “I mean, we have a tremendous amount of personal loss in the neighbourhood, not to mention fear, when this goes [up].”

Badour says the council ignored the petition and claims the mayor paid more attention to representatives from other cities like North Vancouver than he did residents of Coquitlam. Stewart disagrees, saying council felt the petition didn’t reflect the opinions of the thousands of Coquitlam residents who spoke out in support of the shelter. As for the possible dangers, Stewart says council has done a lot of research on shelters opened in other Metro Vancouver cities, and promises they will learn from their successes.

“We have a role as council to make sure that this is operated similar to the way that Langley has succeeded, and other communities have succeeded in making sure that homeless shelter’s existence doesn’t create challenges for the neighbours,” he says.

“I want those folks who are down on their luck to have the best chance of getting back into society, and I think we can do that without causing harm to the neighbours.”