join us donate
LOG IN or SIGN UP
Liquid syntax error: Error in tag 'subpage' - No such page slug join
find a vendor
November 07, 2017

by Megaphone follow this author
photos: Photo by David Cooper.

Giving back to her neighbourhood

This isn’t the first time Priscillia Tait has won the Hope in Shadows photo contest but it is the first time one of her photographs made it on cover.

“I use the ladies’ tea party, I go there to feel safe from the neighbourhood,” Priscillia says. “We do arts and crafts at the same time.”

When Priscillia arrived with her Hope in Shadows contest camera in the summer, she had just missed the chance to make her own sock monkey. But when she saw her friends Brenda and Lu, she asked them for a photo since she was nearing the end of her film roll.

“They’ve got beautiful smiles,” she adds. 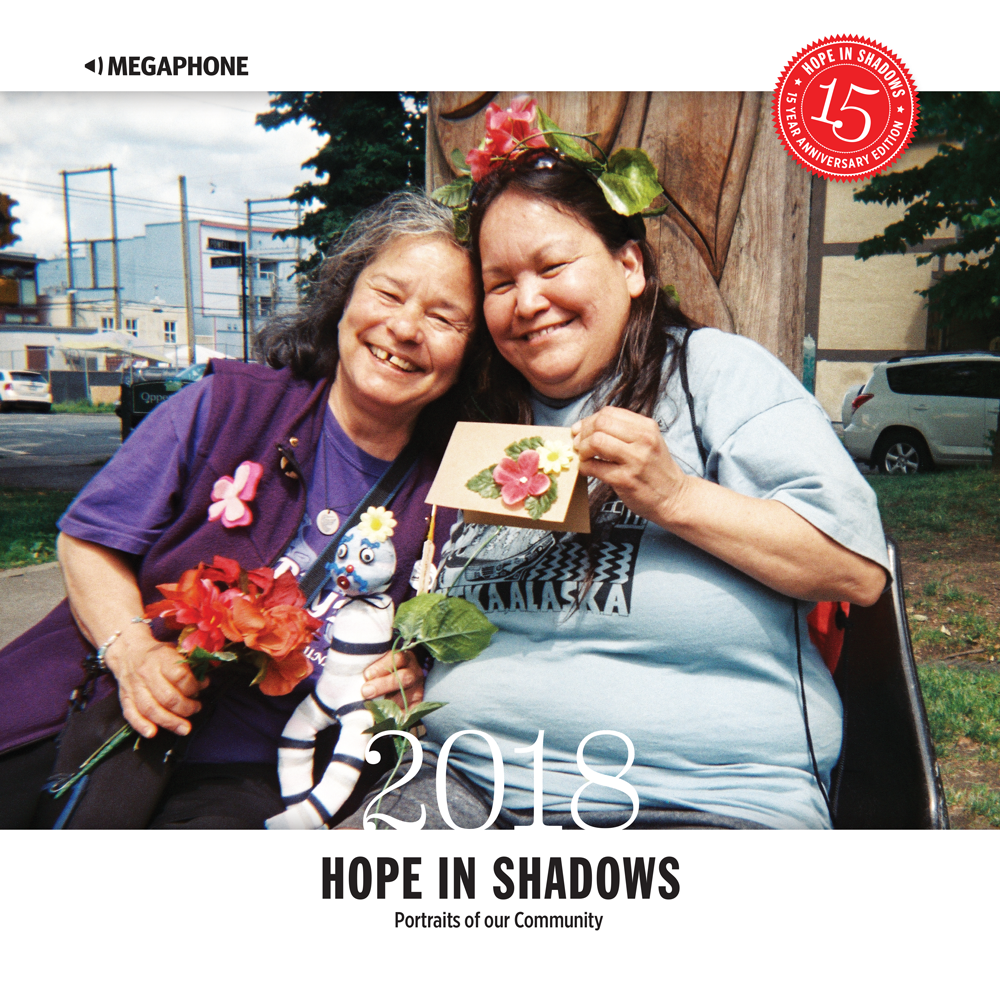 Priscillia is from the Wetsuwet’en and Gitxsan territory. “My late grandparents attended Lejac Residential School in Fort Fraser, but that didn’t take away their language and humour,” she says.

Priscillia grew up with her late grandparents, Sarah and Thomas Tait, who gave her the “opportunity to play and use my imagination,” she says. They bonded over watching The Muppet Show and Sesame Street together, which also helped her get through trauma from the ages of 5 to 12. “So I got lost in the Muppet Show and Sesame Street, which kept me safe for that time being and just being with my grandparents.

“Jim Henson (creator of the Muppets) had a way to have some adult humour along with the children’s theme with the Muppet Show because that’s how I connected closer with my grandparents.”

When she was 13, Priscillia moved to South Vancouver and was one of about five Indigenous students out of 300 to attend John Oliver Secondary—and she was related to most of the other four. “I was asked if I was a real native a few times from the other students,” she says. But they placed Priscillia in modified classes with ESL students for English, math, and science.

“They said I was native, so this would be easier for me. It really pushed me down.”

Despite the setback in high school, Priscillia upgraded her courses and went to the University of British Columbia for the Indigenous teacher education program, but she was only able to complete two years of the program.

“And it took me three years, and I didn’t complete it because my late grandmother passed away,” she says. “I fell through depression, and then that’s when I got into the community play and involvement in the Downtown Eastside.”

The year of 1997 was a tough one for Priscillia. She was homeless for six months, squatting in a house. It wasn’t until a Collingwood neighbourhood First Nations worker helped her find shelter for her and her young son. Not only was she trying to continue her education, but she also got pneumonia, and was trying to get in touch with her son’s father—all while getting to know the Downtown Eastside for the first time.

Around this time though, Priscillia discovered Oppenheimer Park, the Powell Street Festival was underway, and she started going to the Downtown Eastside Women’s Centre. “I finally did get my housing,” she adds. “I’d go to the Carnegie, especially for my son to run around the gym and while his uncle looked after him I could do my homework.”

Once her son got older, Priscillia decided it was time to give back to the community that brought so much art and healing during a difficult time in her life. She began volunteering at the Carnegie, and now serves on their board.

It wasn’t until “she got nosey” in 2003, and took her son to the top of the Carnegie where they happened to be doing auditions for the community play, which would later inspire the annual Heart of the City Festival with Vancouver Moving Theatre.

“That’s how I got started in performance,” she notes. “And ever since, with the Vancouver Moving Theatre, I’ve produced some productions.”

The one thing performing in theatre has taught her is patience.

Priscillia is also involved in social activism in her community, particularly around housing issues. She helped out with the Balmoral before it was shut down and she hopes to see a community space take up a building at the corner of Gore and Hastings—the Rainbow Connection.

“It’s my dream to have that corner building open for underhoused or homeless people, where they can nap and refresh, have a clear mind to do what they can for the day,” she says. “And a music room where they can relax and chill, and a rooftop garden.”

Her motto is “stay beautiful at heart,” she says. And as a devoted mother, she’s grateful to have found a community that’s given her space to express herself through visual arts, theatre, and dance.

“The Downtown Eastside has many hidden talented people,” she says. “They just need a little boost—like having the Rainbow Connection Centre!”

Priscillia Tait is a Megaphone vendor in Vancouver. Interview by Stefania Seccia.

Download our mobile app to find vendors and pay for magazines and calendars even if you don't have cash.