join us donate
LOG IN or SIGN UP
Liquid syntax error: Error in tag 'subpage' - No such page slug join
find a vendor
June 18, 2019
by Paula Carlson follow this author
photos: Find Peter selling outside of Choices Market on 4th Ave and Vine Street 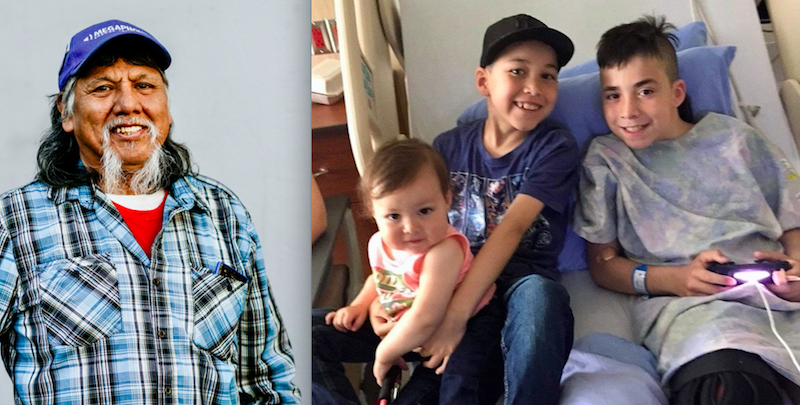 Longtime Megaphone vendor Peter Thompson talks about the importance of being a grandfather.

At 59, Thompson is already a three-time grandfather—or “Shup’lah” (pronounced Sch-popp-la) in Nlaka'pamuctsin, the language of the Nlaka’pamux Nation. Also known as the Thompson language, it is spoken among Indigenous Peoples in the Fraser and Thompson canyons, and Nicola region of B.C., which includes Spuzzum, Boston Bar, Lytton, Spences Bridge and Merritt.

Shup’lah takes his role as elder seriously, ensuring he spends quality time each week with his grandchildren: 12-year-old C.J.; nine-year-old Payton; and Kortney, who just turned one last month and is Thompson’s little “princess.”

“You have to give them good teachings,” Thompson says. “In language, in respect, manners… how to be good people.”

But it’s not all serious business.

“Oh yeah, I spoil them,” he says with a mischievous grin. “You’ve got to have fun. I bought the boys bikes at Christmas and I gave Kortney a little push bike. Right now, she’s just learning to walk.”

Thompsons says the money he earns selling Megaphone at his corner at West Fourth Avenue and Vine Street in Vancouver often finds its way into gifts for his grandkids.

“The money definitely helps quite a bit. It gives me that extra money to buy them things and to help out. I try to do that whenever I can. And I’m able to buy them birthday and Christmas gifts,” Thompson says.

Most of the presents from Shup’lah are related to the outdoors, something Thompson says is intentional.

“You have to teach them how to be outside, how to stay active, instead of being on the computer or the phone all the time,” he says.

Shup’lah shows his grandchildren how to play baseball, and during the summertime, when they visit family in Merritt, he takes them trout fishing on Blue Lake.

“I bought them fishing rods,” he says.

Thompson honed his grand-parenting skills as a dad of two: Eugene, 25, and Peter, 28, a.k.a. “kiddo,” who is the father of C.J., Payton and Kortney. Peter junior and his family live in Richmond, so Thompson is able to see his grandkids regularly.

“I try to get out there every Sunday,” he says. “We hang out, on hot days I take them to the pool. We have a picnic or a barbecue.

“The best part is hearing their joy and their laughter,” Thompson says, “and giving them good memories.”

Peter Thompson’s grandchildren (above, from left) Kortney, 1; Payton, 9; and C.J., 11. The trio is pictured in hospital, where C.J. had just undergone surgery on his right leg. Thompson says doctors are hopeful C.J. will heal quickly, but the youngster is not too keen on having a cast on his leg for the next six to eight weeks.