join us donate
LOG IN or SIGN UP
Liquid syntax error: Error in tag 'subpage' - No such page slug join
find a vendor
February 28, 2022

'Everyone of us has the power to make change' 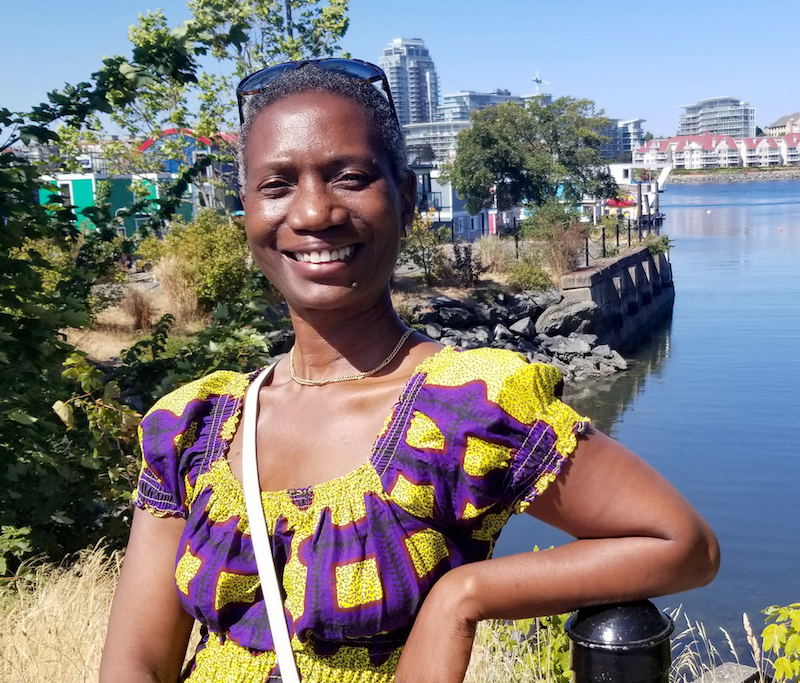 President of the B.C. Black History Awareness Society is optimistic about the rise in empowerment she's seeing among people of colour

In early December, I walked into a Michaels store in Victoria to buy yarn. I walked through the Christmas section and was pleasantly surprised to see that a large number of the nutcrackers and Santas on display were Black.

It seems there has been increasing representation of people of colour emerging—in popular culture and everyday life—after events in the United States, along with the Black Lives Matter movement, have come to the forefront. But with COVID-19 keeping many of us at home and distracted, this display of mainstream presence is powerful, even if only in a consumer setting. My observation made me wonder: What other spaces are people of colour now occupying and is this a positive move towards stronger representation?

I recently spoke with Silvia Mangue Alene, president of the B.C. Black History Awareness Society, who offered her views on this topic, along with some more information about the society and what it is doing to celebrate Black History Month, which takes place each year in February. Alene is also the co-founder and president of Kulea Culture Society, an NGO that promotes diversity and inclusion in communities.

The challenges of racism, lack of recognition and few employment opportunities are struggles that people of colour face everywhere, according to Alene.

“Our duty and task as Black people facing racism and discrimination is to resist negative societal messages and to develop an empowered sense of self,” Alene said.

In 2015, after years of volunteering for the B.C. Black History Awareness Society, Alene became the president. She was asked to take on the position and she agreed because, she said, “the society needed to continue doing its job and it needed a committed leadership.”

The group first began in the mid-1970s as the Victoria Black Peoples Society. Created as a way of bringing together people who were interested in the province’s Black history, the society also aimed to develop and nurture future generations’ interest in their history.

In June of 1993, the Royal BC Museum asked the society to organize and co-host a variety of events planned for the following February to celebrate Black History Month. The events were successful, with more than 5,000 attendees, said Alene. The society officially incorporated in March of that year. Alene said that the early 2000s saw a decrease in interest, but in 2006, the organization was re-incorporated as the B.C. Black History Awareness Society, as it is known today.

Following violent events in the United States and the burgeoning Black Lives Matter movement, Alene said there has been greater awareness and interest around learning about Black history in this province and across Canada.

More opportunities for the society to create “events that are meaningful to both the Black community and the community members at large” now exist, said Alene.

A shift away from racial stereotypes in mainstream society leads to the hope that Black people can be portrayed as successful people, “not just as dead bodies or thugs and criminals,” said Alene.

“One of the best ways to fight unconscious bias is by portraying the people that the bias is against in a positive light,” Alene said, adding that social media and television can help with this.

“It’s very important for our children that they see themselves represented in commercials, books and in anything else,” said Alene.

A recent case in point is the joy a two-year-old boy exhibited after seeing “himself” portrayed in the Disney animated film Encanto. Kenzo Brooks (below) was simply delighted after noticing the remarkable resemblance between himself and the film’s main character, Antonio Madrigal, on his TV screen. 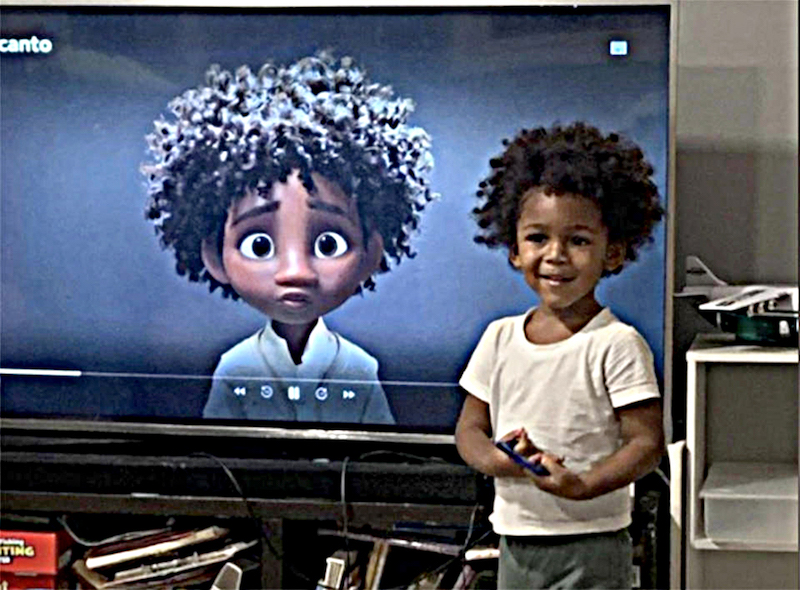 The boy’s mom Kaheisha Brand shared photos on Instagram of the moment Kenzo saw the likeness, and the images and the story went viral with the hashtag #RepresentationMatters.

"It was the impact of feeling seen," Brand told the media of her son’s reaction.
"It is essential for Black children to feel seen and to be connected to positive and empowering images for their self-esteem."

So how do we continue to move forward now that we have momentum? Alene said that we all need to keep pushing forward with purpose. Social justice cannot flourish when anger and fear take over, but can only come about “where there is teaching about love for others,” she said.

Alene also recognizes the intersectionality among other groups that have suffered oppression in a colonial system.

“We find a common ground, a common fight and a common cause because we share a common pain. We need to work together and lift each other up, as this is the only real way forward,” Alene said.

This February, for Black History Month, the B.C. Black History Awareness Society is hosting a number of different events, as well as collaborating with other organizations, such as the Vancouver Mural Association and Victoria’s Government House. One of the most interesting shared projects is with the Royal BC Museum.

The museum approached Alene and the society about creating an exhibit around B.C’s Black history. Given the institution’s 2021 admission of systemic racism in its ranks, Alene is hopeful the partnership means the museum is trying to learn from past mistakes. Its approach was “refreshing, unique and innovative,” she said, because the museum asked the Black community to do an exhibit about themselves using their own voices.

The resulting eight-month-long project, Hope Meets Action: Echoes Through the Black Continuum, was designed and led by B.C.’s Black community and is now on display at the museum until the end of March. Located in the museum's Pocket Gallery, the exhibit uses multimedia pieces to reclaim history and retell stories.​​

From the museum website: “Written, told and designed by Black voices, this exhibition reclaims and retells the complicated history of stolen people on stolen land, and how the contributions of Black leaders echo across the centuries into the present.

“Central to this narrative are the seldom-told stories of Black women such as Sylvia Stark, who was born an enslaved person in Missouri, taught herself to read by secretly listening to her master’s children’s lessons and eventually became a pillar of the Black pioneer community on Salt Spring Island. Her daughter Emma Stark became the first Black teacher on Vancouver Island.”

Black audiences can also participate by calling a phone number (250-387-2016) to record their experiences of living in the province. “These can be stories of Black joy, pain, connection, culture and community; the museum of YOU. If selected your story will be played at the exhibition,” according to the BCBHAS website.

Alene sees all of these recent changes as significant. She believes it means something when places such as a historically colonial institution that has often undermined “other” cultures are “standing at the same level as the community and willing to co-create with the community and work with mutual respect.”

The shift in mainstream media, organizations and individual people is evidence that change is not only possible, but is happening, Alene said.

“Our community is holding them accountable… they have to make changes because we, the public, are watching,” Alene said. “A willingness for an equitable and fair society has to come from ‘both sides’ because every one of us has the power to make change.”

To find out more about the British Columbia Black History Awareness Society and events going on for Black History month visit: https://bcBlackhistory.ca/ 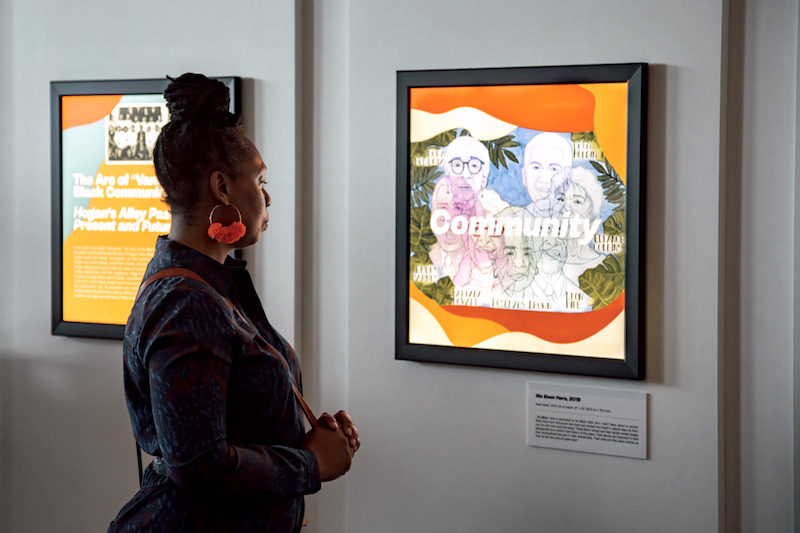 Above: One of Sade Alexis' pieces on display at Hope Meets Action: Echoes Through the Black Continuum. Titled We Been Here, it depicts historic Black figures of B.C. Alexis said she overlapped the drawings to convey a sense of community. Royal BC Museum photo.