join us donate
LOG IN or SIGN UP
Liquid syntax error: Error in tag 'subpage' - No such page slug join
find a vendor
January 22, 2014

Heavy measures: Overdose risk as methadone in B.C. gets stronger 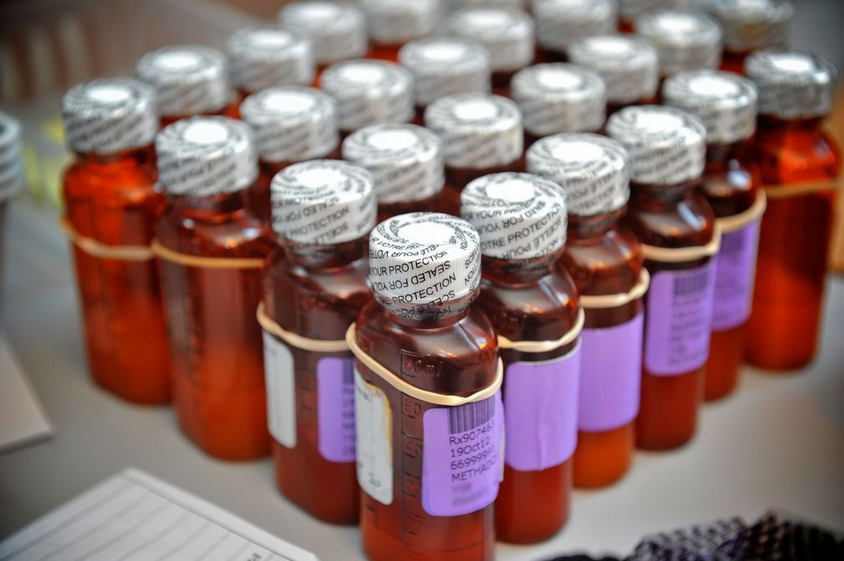 Methadone is about to become 10 times stronger in B.C., a change that could put unsuspecting users at risk of overdose or even death, according to concerned community health advocates.

Methadone is a highly regulated, strong narcotic used to treat addiction to opiates, like heroin, Oxycontin and Fentanyl. Starting February 1, it will be dispensed in a 10mg/ml cherry-flavoured syrup, rather than the current 1mg/ml orange Tang-like liquid.* Unbeknownst to many, that change marks a 10-fold concentration increase. The new product, called Methadose, also resembles children’s medication, which increases the risk of accidental digestion.

The College of Physicians and Surgeons of BC, which administers methadone prescription, has warned of a “public safety risk until all stakeholders are informed.” The College of Pharmacists of BC warned of “a greater impact as a result of measurement error.” Even a small error of only 1ml in prescribing or dispensing will have 10 times the effect.

An addictions specialist, who asked not to be identified, shared a document provided to her by the BC College of Physicians and Surgeons. The document advises doctors to “consider providing patients who may be at risk of overdose with Nalaxone." Nalaxone, also known as Narcan, is a fast-acting medication for emergency use when someone overdoses. The doctor said she was “floored” by the notion that this change to a stronger methadone is so risky that doctors are advised to send patients home with overdose medication.

Regulators say the dosage change is part of an effort to standardize the dispensing of methadone dispensation across Canada and make it harder to sell and use outside of legal, official contexts.

The new product is also supposed to make it harder for pharmacists to water down their methadone and sell it illegally.

However, “juice,” as methadone is commonly referred to, is often bought on the street despite laws prohibiting its sale. Illicit users will be less likely to know about the potentially deadly consequences of drinking the stronger product.

Jeff Louden has been on the methadone maintenance program for nine years and a user of opiates for much longer. He’s articulate about harm reduction strategies and drug enforcement policy in the DTES.

Louden says the new, more powerful methadone dose will cause people to overdose and die. He worries that anyone buying methadone on the street won’t know about the new, stronger juice. Or even if they have heard, “nobody will believe you, because everybody [who sells drugs or methadone] has got [the claim of a stronger product] as a selling point.” In fact, Louden says, when rumors or warnings go around, some drug users actively seek it out.

Louden and others say that some pharmacists in the DTES are corrupt, watering down patients’ juice and illegally selling off the remainder. He knows both ends of this scam, having had this diluted, ineffective medication dispensed to him over the counter, and also illegally buying methadone powder from the back door of pharmacy.

Much of the methadone in the neighbourhood is diluted, he says. He warns that when the new methadone is introduced, some patients may be receiving an accurate dose, which is not watered down, for the first time. This sudden increase from one dose to the next can cause overdose.

This move to stronger methadone has put up “the biggest red flag” for Laura Shaver, president of the BC Association of People on Methadone (BCAPOM). Shaver is a methadone patient herself. She isn’t paid for her advocacy work, but she is frenetically busy campaigning for methadone patients and is well versed in MMT. She’s angry that methadone patients have so little agency in their own treatment.

Shaver says that “methadone to an addict is the same as insulin is to a diabetic,” yet users are “stigmatized and controlled” so much they call methadone “liquid handcuffs.” Shaver is also worried about overdoses and deaths, and sees the sudden switchover to Methadose is just another example of the powerlessness of methadone patients.

“Methadone patients, more than any other large patient group [...] have very little voice in how the program works and how the rules are going to be set,” he says.

For months, authorities have been asked whether they plan to undertake a public awareness campaign to alert patients and the community about Methadose. None had been revealed, despite the fact the move to a stronger methadone has been in the works for over a year, when Health Canada approved Methadose for use in Canada.

With just two weeks until Methadose hits the streets, authorities finally announced the changes to MMT. On January 13, the B.C. Ministry of Health jointly issued a press release with the College of Pharmacists of BC and the College of Physicians and Surgeons of BC, explaining the new product and promising a poster campaign to warn methadone patients to “think before you drink.”

Authorities advised that: “Methadose is a strong opioid and can be fatal. Anyone suspecting accidental ingestion, especially by a child, should immediately call 9-1-1.”

But drug users and methadone patients are not always easy to reach and the clock is ticking. Mariner Janes of the Portland Hotel Society (PHS) says they plan to talk to people and distribute information from their needle exchange vans.

BCAPOM decided not to wait for any official action and launched their own public awareness campaign. Shaver said BCAPOM’s poster will use simple, clear language and graphics, rather than the more text heavy, bureaucratic efforts that tend to characterize government communications.

Her message to methadone patients: “Be careful. Just be careful.”

*Correction (01/22/14): We previously reported that doses were changed to 1mg/1ml from 1mg/10ml. The correct doses have been updated in the story.