join us donate
LOG IN or SIGN UP
Liquid syntax error: Error in tag 'subpage' - No such page slug join
find a vendor
March 07, 2013 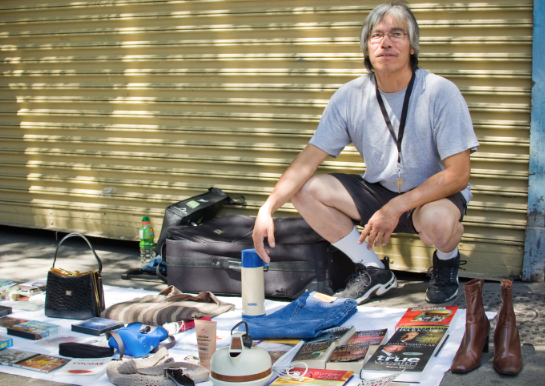 The Downtown Eastside has a thriving street vending scene, where local residents and bottle binners will often sell found goods on the street in order to earn extra income. Photo by Chris Bevacqua.

No neighbourhood in Vancouver is immune to minor infactions like jaywalking and street vending. But according to Vancouver Police Department (VPD) statistics, 95 per cent of the tickets issued for these infractions were handed out in one neighbourhood over the past four years: the Downtown Eastside.

“There’s no way to spin that other than the Vancouver Police Department is enforcing bylaws more heavily in the Downtown Eastside than in other neighbourhoods,” said Douglas King, a lawyer with Pivot Legal Society, which obtained the ticketing statistics from the VPD.

“They’ve admitted to us that this ticketing doesn’t work, that it’s not effective in changing behaviour or doing anything as far as bylaw enforcement goes. Everybody knows to make the bylaw enforcement go away, what you need to do is improve social conditions in the Downtown Eastside.”

King and members of the Vancouver Area Network of Drug Users (VANDU) held a press conference at the Pivot office today to denounce what they see as a misuse of the city’s street and traffic bylaw by ticketing low-income street vendors and jaywalkers who can’t afford to pay fines. They have submitted a complaint to the Vancouver police board, and today called on the city to ensure the VPD stop “mining our neighbourhood for crime.”

“They shouldn’t be enforcing these vending bylaws until seven days a week there’s a place for people to go and vend their goods in the Downtown Eastside. People need access to something like a front yard or a backyard like other people in the city have,” said VANDU employee Aiyanas Ormond, comparing street vending to yard sales. 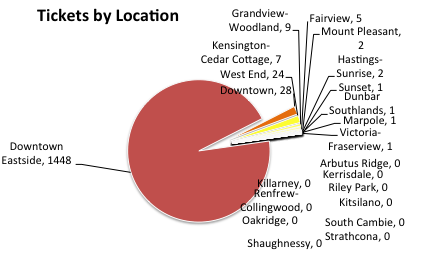 Between 2008 and 2012, the Vancouver Police Department has issued 1,448 steet and traffic bylaw tickets in the Downtown Eastside, compared to just a handful in other neighbourhoods. Source: Pivot Legal Society.

This isn’t a new issue: in 2009 city council directed the Vancouver Police Board to stop the aggressive ticketing called for under the previous council’s Project Civil City. But VANDU and Pivot say the ticketing hasn’t stopped, despite regular violations of other sections of the street and traffic bylaw, such as jaywalking, happening all over the city.

Constable Brian Montague told Megaphone he doesn’t dispute Pivot’s numbers, but contradicted King’s claims that vending happens in other areas of the city.

“The tickets are given out because that’s where the offense is occurring. We simply don’t have a street vending problem in the rest of the city,” he said during a phone interview.

When asked if he was aware of street vending on Commercial Drive and just off Main Street, Montague said it could be the VPD had received no complaints or that’s where the other five per cent of tickets are issued.

They have received complaints about vending on the 100 block of East Hastings, however, and police often conduct “proactive policing” in the area to catch crimes before someone calls. 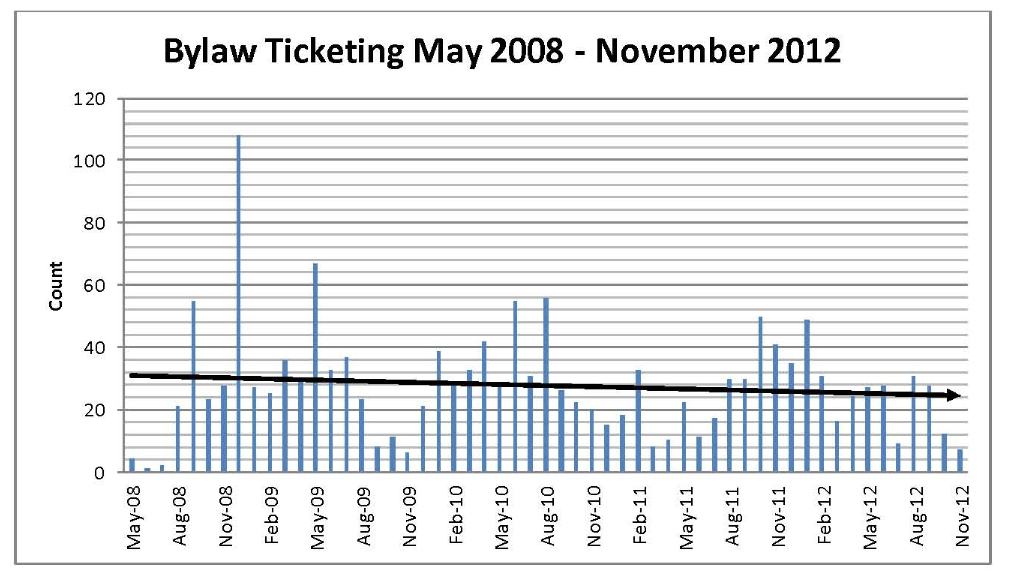 Despite assurances from Vancouver city council that the police would stop targetting Downtown Eastside residents with bylaw tickets, ticketing has remained steady over the past four years. Source: Pivot Legal Society.

“[Vending] creates a large problem by generating street disorder: the items being sold are often stolen and there’s also often times that there’s unsafe food products there that are being sold,” said Montague.

“A lot of the time the street vending is being used as a cover for drug dealing.”

VANDU members present at this morning’s press conference denied the majority of items are stolen. Ormond says if police suspect theft there are different laws covering that much more serious crime.

“We’re not saying that they shouldn’t enforce those laws. Why are they using a bylaw that’s not intended for the purpose to enforce it, that’s the issue,” said Ormond.

Dave Hamm, a VANDU member and street vendor, says all of the items he sells he’s found.

“We renew, we reuse, we recycle. We’re frontline eco-warriors out there,” he said, adding he needs to vend to supplement the “criminally low” welfare cheques he receives.

But Montague says in cases where police can’t prove items are stolen, ticketing is one of the tools available to curb suspected crime.

“If by ticketing an individual and stopping the street vending stops stolen items from being sold or items from being stolen in the first place, or from drug dealing or general street disorder happening, then yes, it’s proactive policing,” he said.

“It’s not that we’re guessing that they’re stolen, but a lot of times we don’t have the evidence to lay a charge of possession of stolen property or theft, the ticket is another option that our officers have.”

The City of Vancouver declined to comment, saying it is a VPD matter.