join us donate
LOG IN or SIGN UP
Liquid syntax error: Error in tag 'subpage' - No such page slug join
find a vendor
March 12, 2020
by Paula Carlson follow this author
photos: Hendrik Beune was well-known in the DTES, involved all over the community. 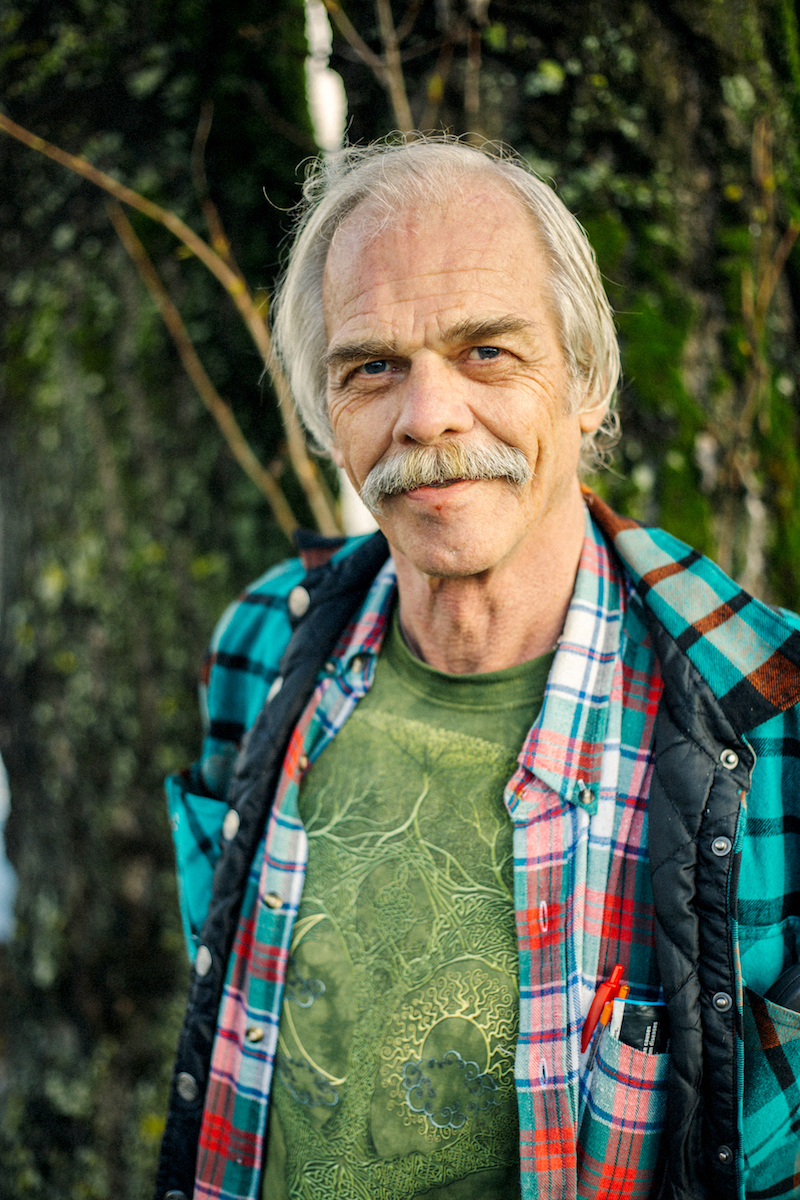 He studied marine biology, zoology and ecology, ran an oyster and shellfish farm, scuba-dived in waters around the world, fathered two daughters, worked as a consultant for permaculture design, built boats, was an avid binner and passionate environmentalist, sold street newspapers, got high on “the best MDMA in the Lower Mainland,” and danced. A lot.

It’s safe to say Hendrik Marinus Beune lived a colourful life, one that came to an end last month at St. John Hospice on the grounds of the University of British Columbia, where Hendrik had earned a degree many decades ago.

Outside the hospice building, perched as it is at the western tip of the Burrard Peninsula in Vancouver, when you breathe the air in deeply, you can smell the ocean.

This fact wasn’t lost on Hendrik, who when visited by Megaphone staff during his final days, commented with pleasant awe, “Who could have guessed I would've wound up here?”

Inside the building, a steady rotation of family members and other visitors kept vigil with Hendrik as he faced his final days with equal parts keen insight and good humour. He had recently been diagnosed with terminal cancer and after a short battle, he passed away peacefully with his loved ones by his side on Dec. 14, 2019.

Hendrik was born in Utrecht, the Netherlands, the eldest of five sons. He came to Canada in 1970, arriving in Vancouver shortly afterwards and becoming "a full-fledged hippie.”

After completing his studies at UBC, Hendrik lived on the Sunshine Coast for 12 years, “beyond civilization as we know it” in Theodosia Inlet near Desolation Sound Marine Park, where he started a family.

His wife was a sailing instructor who loved the water and being outdoors, and she and Hendrik had two daughters and enjoyed many idyllic years together running a shellfish farm. Years of lifting oysters and clams eventually took its toll on Hendrik, however, and he injured his back.

“After I turned 50, the work was getting too heavy for me,” Hendrik said, so he came back to Vancouver, where in his words, he found another wildlife resort of sorts.

The Downtown Eastside, he said, “called to me like home.”

He found a kinship in the DTES, and the hardship he both saw and experienced resonated with his compassionate nature.

“The Downtown Eastside is a lively and noisy place. The liveliness was a welcome change from years of isolation, but the noise factor, especially the sirens that really hurt my ears, bothered me more than the rough conditions on the water ever did,” Hendrik said.

“You witness a lot of PTSD... Most people who live [in the DTES] suffered trauma in their early childhood and now suffer mental health or addiction problems as a consequence. Drug addiction is really self-medication.”

Henrik plunged himself into the heart of the community, spending the last nearly 20 years being of service, including joining Megaphone from its very beginnings. He sold at Vancouver farmers' markets, at Nat Bailey and Hastings Park in winter, and at Trout Lake and Thornton Park, across from Pacific Central Rail Station, in the summer.

“I can't think of anyone I know who has served on more DTES community advisory boards, working groups, boards-of-directors or collectives at one time than Hendrik Beune," said Jessica Hannon, former executive director of Megaphone, where in addition to being a dedicated vendor, Hendrik was a frequent writing contributor.

“One look at his day planner laying sprawled out on the vendor counter at Megaphone told the tale. It was bursting at the seams—scrawled time slots, appointments, meetings and scraps of community news. That day planner gave you a good sense of the energy this man put out into the world: Megaphone, Binners' Project, Pivot Legal Society, Urban Core, Downtown Eastside Neighbourhood House, Right to Food Zine, and more. He was involved all over the community.”

Former Megaphone editor Stefania Seccia said Hendrik was a pleasure to work with.

"He loved to talk, he loved his community and he loved writing," she said. "Hendrik was a fierce advocate about food security, social justice and nature. He cared so much and it was contagious. I will miss him so much and I know so many of us from the community will."

At St. John Hospice, before he died, Hendrik was reunited with his brothers—Vincent, Adrian, Ben and Erik—who travelled from various parts of the world to be with him.

"When you get to the end of your life, what matters is when people express how much they care, that's what really matters," Hendrik said. "The truth and nothing but the truth, not like making a business deal."

Henrik's remains have been cremated and his ashes went to The Netherlands, where he was laid to rest alongside other family members who have passed.

On the Doorstep of Home

Home  can be a place,

It can be more than one place,

Or more than a place at all

Home is a timeless mind-space

with past, present, and future all united.

Connected through threads of overwhelming feelings.

Home is a web!

Home is a web of emotions

Which can be far apart in space and time.

Yet somehow they connect...

Home is a web in time and space

Home is a web in time and space

To be sure: a web has holes,

And a web can catch you.

Feeling connected is what makes you feel at home.

Some of these connections are familiar

Yet they can feel at home elsewhere...

You can feel at home in a place you've never been

But innately you feel at home.

Like you were born with a sense for home.

Home can be magic!

A magical place home is...

If it is a place at all?

Drift away to where your heart and soul takes you...

Home is heart and soul!

Home is innocence and home is knowledge

The wise can feel at home anywhere

The wise, they are enlightened and at one with the Creator, they say.

Home is where you feel good

Home is where you make things comfortable for others

Home is where you connect with friends,

or you can be alone and feel united with the universe.

Like love, home is where the heart is, they say!

There is a treasure in that little gem of wisdom...

and it can be found anywhere, if you just take the time!