join us donate
LOG IN or SIGN UP
Liquid syntax error: Error in tag 'subpage' - No such page slug join
find a vendor
June 18, 2012 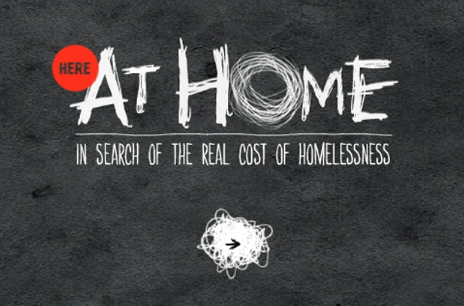 It is recognized that many homeless people suffer from mental illness or addiction, but the few strategies employed to help have proven to be failures. The status quo approach of trying to treat and rehabilitate people before they are provided with housing betrays the stigma associated with mental illness. Within this framework housing is not a right, but something to be awarded to the deserving. As we see on our streets everyday, this system clearly doesn’t work.

In 2008, the federal government funded the Mental Health Commission of Canada (MHCC) to conduct a nationwide experiment using a strategy called ‘housing first’: giving people a home before addressing other issues. The study is aimed at determining the effectiveness of the new strategy; some participants are housed while a control group is not.

By the end of March 2013 the results will be in. The hard figures determining the true cost of homelessness are one part, but the project will also have generated a priceless archive of experience from participants, support workers and community members, alike.

In an innovative and excitingly transparent move, the MHCC joined forces with the National Film Board (NFB) last year, building an interactive real time web documentary about the project’s progress. NFB’s Here at Home features short documentary segments from all five cities included in the study; Vancouver, Winnipeg, Toronto, Montreal and Moncton.

To date there are eight short films, supported by background information and recent updates. We can look forward to 42 more by March 2013. Each short film is a dispatch from the front line of the experiment. We see participants and support workers trying, adapting, rethinking and re-working their roles and abilities as situations arise.

The range of emotions, from elation to despair to hope to resignation, that takes a viewer through the first eight films is incredible.

Simon, a Montreal-based former addict, walks through his new apartment for the first time. He loves the window, he loves the ceilings, he really loves the bed and his eyes are sparkling with excitement. This is what you want to see.

James, however, is finding his new home and the world indoors overwhelming. After spending 20 years sleeping on the streets and feeling in control of his world, he feels displaced by his belongings. His caseworker says he doesn’t eat when there’s no food in the fridge, and he is frustrated by not being able to work his oven. Theresa deals with being evicted from her home and the prospect of returning to the streets and reveals to her caseworker that she has bone cancer. Lucas, a caseworker in Winnipeg, reflects on the wound left by the country’s history of colonialism.

The interactive web-based documentary is beautifully created and draws you into and through the content in an intuitive and exploratory way. It is structured to make connections within the cities and the country, to show that Canada is one place despite its regional disparity. If the problems we face in these five cities are reflections of a singular problem, the solution must be as well.

You can view the documentaries online by visiting AtHome.NFB.ca.