join us donate
LOG IN or SIGN UP
Liquid syntax error: Error in tag 'subpage' - No such page slug join
find a vendor
October 31, 2018

by Rosemary Newton follow this author
photos: Heart of the City Festival
feature

Hope and healing in the Heart of the City 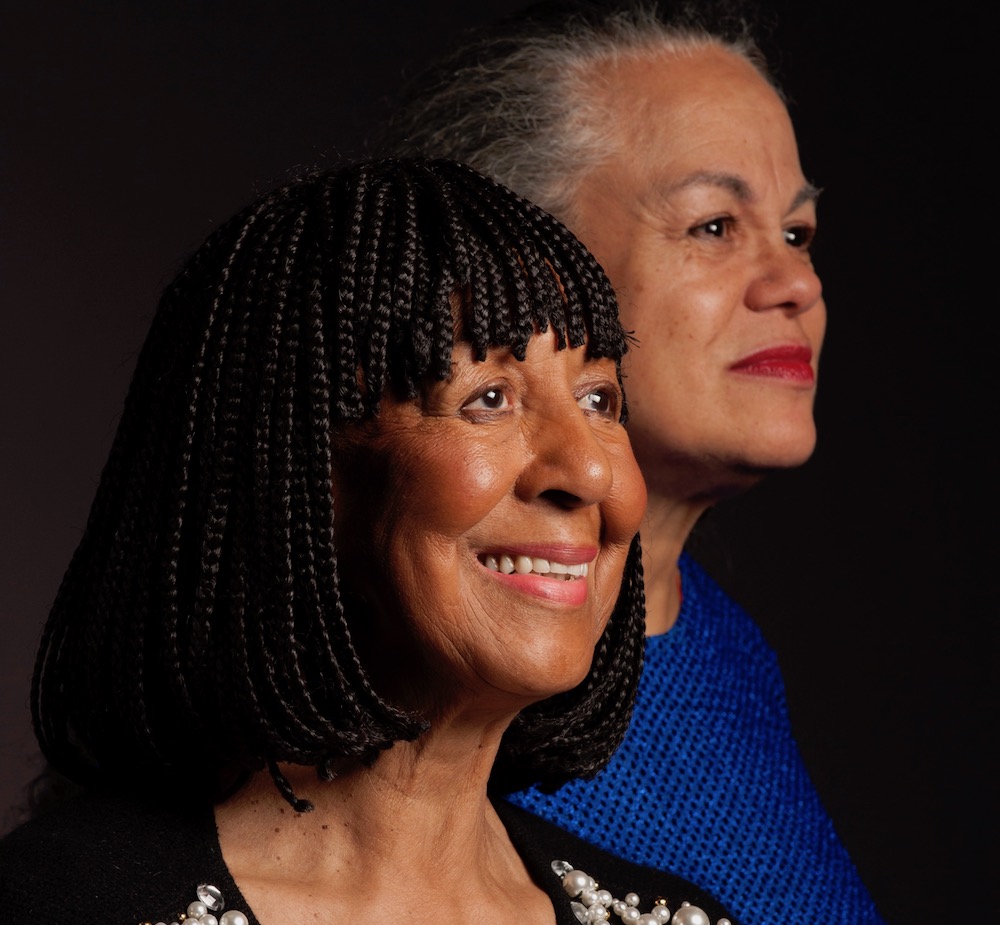 "It reminded me of who I was" — How a Downtown Eastside arts-and-cultural festival brought a blues queen back to life.

Bowen has been making music on the Canadian and international scene for more than 50 years, opening for such acts as The Monkees, Led Zeppelin, B.B. King and Willie Dixon. In 2015, she was inducted into the Blues Hall of Fame.

“I used to be homeless and living in addiction,” she says.

It was then she met Terry Hunter, who was in the early stages of working with Vancouver Moving Theatre on a project called In The Heart of the City.

“They invited me to be in the play, to audition for the play. I got the part and it reminded me of who I was.”

It was the beginning, Bowen says, of a new journey.

The Heart of the City Festival is now in its 15th year. The 12-day event showcases music, theatre, poetry and more, and is hosted primarily by Vancouver Moving Theatre, Carnegie Community Centre and the Association of United Ukrainian Canadians. It runs Oct. 24 to Nov. 4, with more than 100 events at over 40 locations throughout the Downtown Eastside.

When searching for a theme for the 2018 event, organizers looked to the stories of the Downtown Eastside—past and present. The result is “Seeds of Justice, Seeds of Hope.” Founder and artistic director Hunter says it’s a nod to the neighbourhood’s long history of activism that remains alive and well today.

“The Downtown Eastside has such an incredible history of activism and fights for social justice in the neighbourhood,” says Hunter. “As [anti-poverty activist] Jean Swanson has said, ‘everything we have in this community we’ve had to fight for’.”

Hunter explains that performances at this year’s festival speak to the neighbourhood’s heritage, as well as contemporary struggles.

“The theme—Seeds of Justice, Seeds of Hope—is really about bringing out those historical stories that took place” he says. “It’s also about the current voices in the room. The work were bringing forward this year is trying to address

and support those voices and the issues that are happening on the ground.”

With a mandate to promote, present and foster the development of artists, art forms, cultural traditions, history, activism, people and stories about Vancouver’s Downtown Eastside, more than 1,000 residents from the Downtown Eastside took part in last year’s festival.

Among them was Bowen, who is well-known in the community as the creative director of the Downtown Eastside Centre for the Arts.

Bowen is a special guest in this year’s show East End Blues & All That Jazz. A hit in 2011, the show returns this year.

The gospel, blues and jazz performance commemorates the contributions of Vancouver’s historic Black community and the legendary Gibson family, a prominent family of entertainers in Hogan’s Alley, a hub for live music that was demolished to make way for the Georgia Viaduct.

Bowen will be joined by family matriarch Thelma Gibson, who just celebrated her 90th birthday.

With efforts underway to formally recognize the history of Hogan’s Alley, Hunter felt it was time East End Blues & All That Jazz made another run.

“This show really brings that to life and it also brings to life the racism and the discrimination that they faced.”

Bowen, who is of African-Canadian/ Cherokee descent, says “it’s a wonderful tribute to the people, to the music, and just that important time in Vancouver regarding the Black community.”

Bowen, who Hunter calls a “blues queen,” has been involved with the festival since the beginning.

“I’ve written plays... poems that turned into songs, my first CD recording... all came from being able to participate in the Vancouver Moving Theatre project and the Heart of the City Festival,” Bowen says. “Anything that Terry and Savannah [of Vancouver Moving Theatre] ask me I would do because one, they saved my life, and two, they gave me the support i needed to believe in myself.”

After having two minor strokes in 2015 and early 2016, she says her recovery has reminded her that music is her joy.

“I run the Downtown Eastside Centre for the Arts and our approach is we use art as a healing tool. I believe that everybody is an artist in some way or another,” she says. “What the heart of the city festival has done is give the artists in the Downtown Eastside a voice, a means to express themselves in a good way and it’s a powerfully supportive festival.”

The festival, she says, is shaped by a special dynamic would be be difficult to find in any other community.

“This community is very tight, as it is, because people are trying to survive and so there is a different type of support that you experience here that you don’t experience anywhere else.”

From Eastside roots to around the world

“This production of Material Witness is a big one for us, because we’ve never brought out another show of this scale

before from across Canada,” says Hunter. “It’s particularly exciting because this is a partnership with Spiderwoman Theater of New York and they’re legendary.”

While the purpose of the festival is to support the culture, history, people and art of the Downtown Eastside community, Hunter points out the international shows speak to many of the experiences of residents here.

“Material Witness is really grappling with violence against women and in particular violence against Indigenous women...
it’s a very pertinent production for our community,” Hunter says. “One of the reasons we do this is not only because the productions speak to the community, but it’s also an opportunity for the residents and the artists of our community to get to know and establish relationships from afar.”

Robeson, Hunter says, was denied entry to Canada in the 1950s where he was booked to perform. So he set up a stage at the border in Blaine and sang for a Canadian audience gathered on the other side of the line.

“It’s a very legendary event that took place. That’s just one example. We’re bringing that show to the festival because
it speaks to the discrimination that people of colour face... that history and that story is very relevant to our community,” says Hunter. “For us to now create a bridge on an international level is a really exciting development for us. There are opportunities there to learn from these [international] artists and build these bridges.”

Closer to home, a performance that points to the Downtown Eastside’s unique cultural fabric is a collaborative show between the all-female Japanese drum group Sawagi Taiko and Tzo’kam (below), a Lil- wat family performance group led by composer and traditional singer Russell Wallace. Taking place at the Djavad Mowafaghian World Art Centre, the groups combine to perform Japanese Taiko (drumming) and Indigenous rhythms. 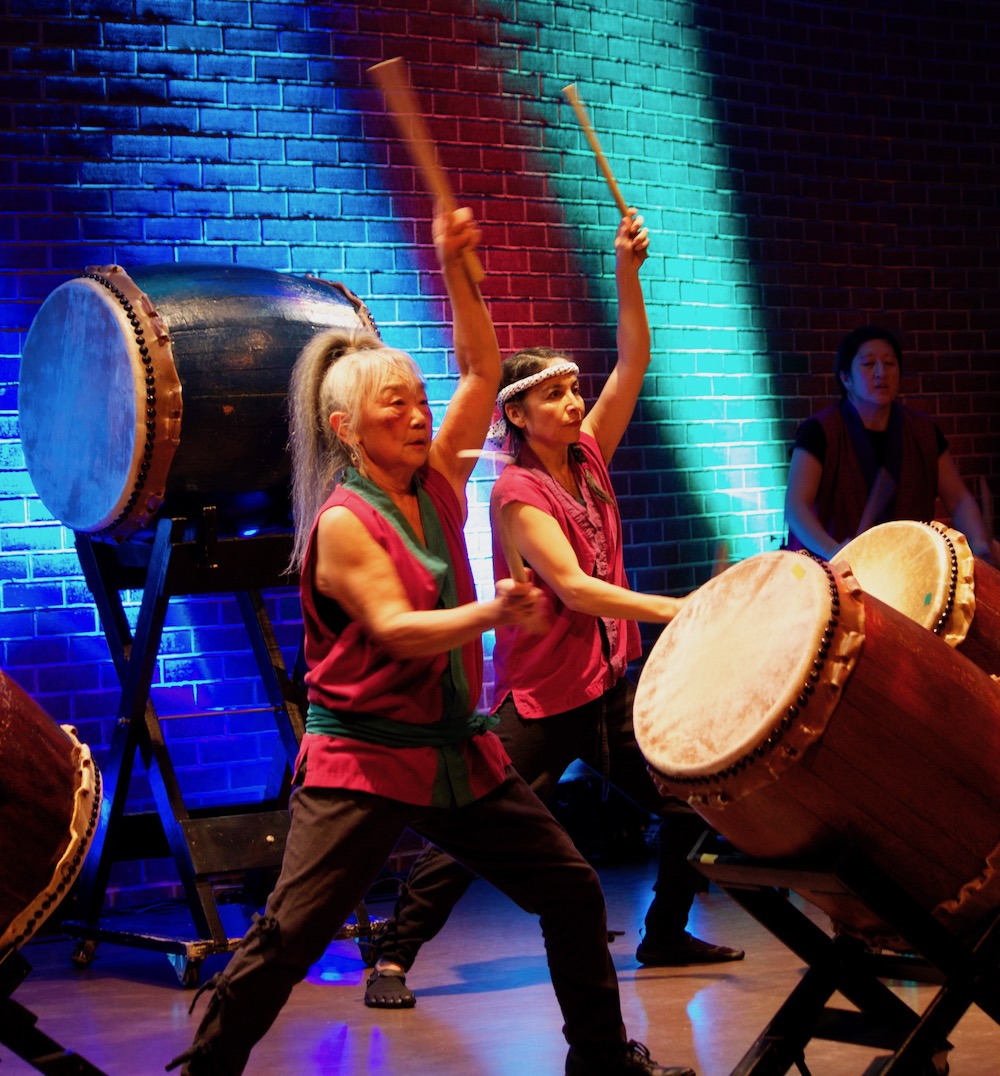 The partnership was formed in 2009 between Linda Uyehara Hoffman of Sawagi Taiko and Russell Wallace for the Powell Street Festival.

“I played Taiko and just kind of improvised on top of it. It was quite a rewarding experience,” Hoffman says. “For the collaboration I was determined that they would share their skills with us and we would share with them. So they did learn a Taiko piece, three of the members, and we learned a dance and song.”

The result, she says, is a completely integrated performance.

“We got to know each other quite well and we’ve done this a number of times since. We really have become quite good friends over the years.”

They became so close, that Wenonah Justin, a member of Tzo’kam, joined Sawagi Taiko as a drummer.

“It’s always really fun and it was really exciting that Wenonah took one of our workshops. At the time, we were just East Asian women, but she was so keen and she was good, and so we said okay, well yeah! We have to take Wenonah, so we are now

East Asian and Indigenous,” Hoffman says. “We’re really happy that from this  collaboration we got a new member and we continue to have performances with Tzo’kam and it’s really very exciting.”

Sawagi Taiko is the first all-women’s Taiko group in North America. Hoffman is also a founding member of Katari Taiko, the first Taiko group in Canada. The group was formed around the creation of the first Powell Street Festival in the late 1970s.

“It really did come out of the Asian- Canadian political movement,” she says. “It came out of this whole wanting to be a presence, a public presence

Hoffman says the groups have since made connections with the Japanese- Canadian community and Downtown Eastside organizations through the Right to Remain movement.

“We really do like performing for Heart of the City. We feel very close to the Downtown Eastside because that’s where the Japanese community was,” she says. “The Japanese Canadians all got moved out and it feels
like the residents of the Downtown Eastside are gradually being pushed out via gentrification. So we feel a real connection to that community because they’re kind of going through what we went through.”

The past is kept alive through stories

Other festival highlights include the concert Songs of Justice, Songs of Hope, with special guest Geoff Berner; Made in Canada, a play-in-progress by Pedro Chamale with PTC (Playwrights Theatre Centre); excerpts of a new musical The Battle of Ballantyne Pier by Sherry MacDonald and Earle Peach; and workshops, guest speakers and visiting poets at the Japanese Hall Heritage Fair.

For festival founder Hunter, the stories of the past are intertwined with the present.

“There are so many stories, so many events, people still know these stories
and they’re alive and they can share them with you. There’s incredible documentation and the things that people were struggling against, or for, are still things were struggling for today,” he says.

The festival, he says, is an open house where residents, artists and organizations can share their art with not only one another, but with the larger community.

Full festival information, schedule, and ticketing information can be found at HeartOfTheCityFestival.com