join us donate
LOG IN or SIGN UP
Liquid syntax error: Error in tag 'subpage' - No such page slug join
find a vendor
August 18, 2016
by Stefania Seccia follow this author
photos: The tent city at 58 West Hastings in Vancouver started with four tents on the first night, and ballooned to between 60 to 80 tents by day 10.

The lack of affordable, sustainable housing for homeless or low-income residents across B.C. has spilled over into tent cities and occupations that have been rising, falling, and popping up again elsewhere steadily since the 2010 Olympics.

While Victoria’s Super InTent City was ordered to collapse by Aug. 8, following a successful injunction application by the provincial government, it also resulted in the province buying housing for the tent city campers. It was seen as a victory for those facing the same barriers to obtain sustainable housing, who no longer want to be stuck on the streets or in a single-room occupancy hotel with no private washroom or kitchen, often a litany of other problems.

Starting with four tents that quickly inflated into around 70 to 90 tents with double occupancy by the 10th day, the tent city that returned to 58 West Hastings—the same spot as the 2010 protest—is trying to keep the fire chief satisfied and avoid the same fate as the other tent cities before it. Organizers don’t want to give the authorities any reason to remove them, due to safety hazards or causing a mess.

The residents try to keep the tents three feet apart, garbage is removed, no candles are allowed, and there is open communication with housing advocates and the Vancouver Police Department.

Many campers who show up trying to set up a tent are only allowed a spot if there is space in the limited area, which is split by a community garden.

Although the Vancouver campers came to an agreement with Vancouver Mayor Gregor Robertson to put 300 units of social housing on the site, the tent city campers do not intend to leave until they see it happen.

The organizers argue that tent cities have a place in the system as they bring people who are sleeping in isolated, unseen areas to a safer space that is much more visible than under bridges, along sidewalks in the Downtown Eastside at night, or in the forest. Megaphone visited the Vancouver tent city to hear directly from the campers. 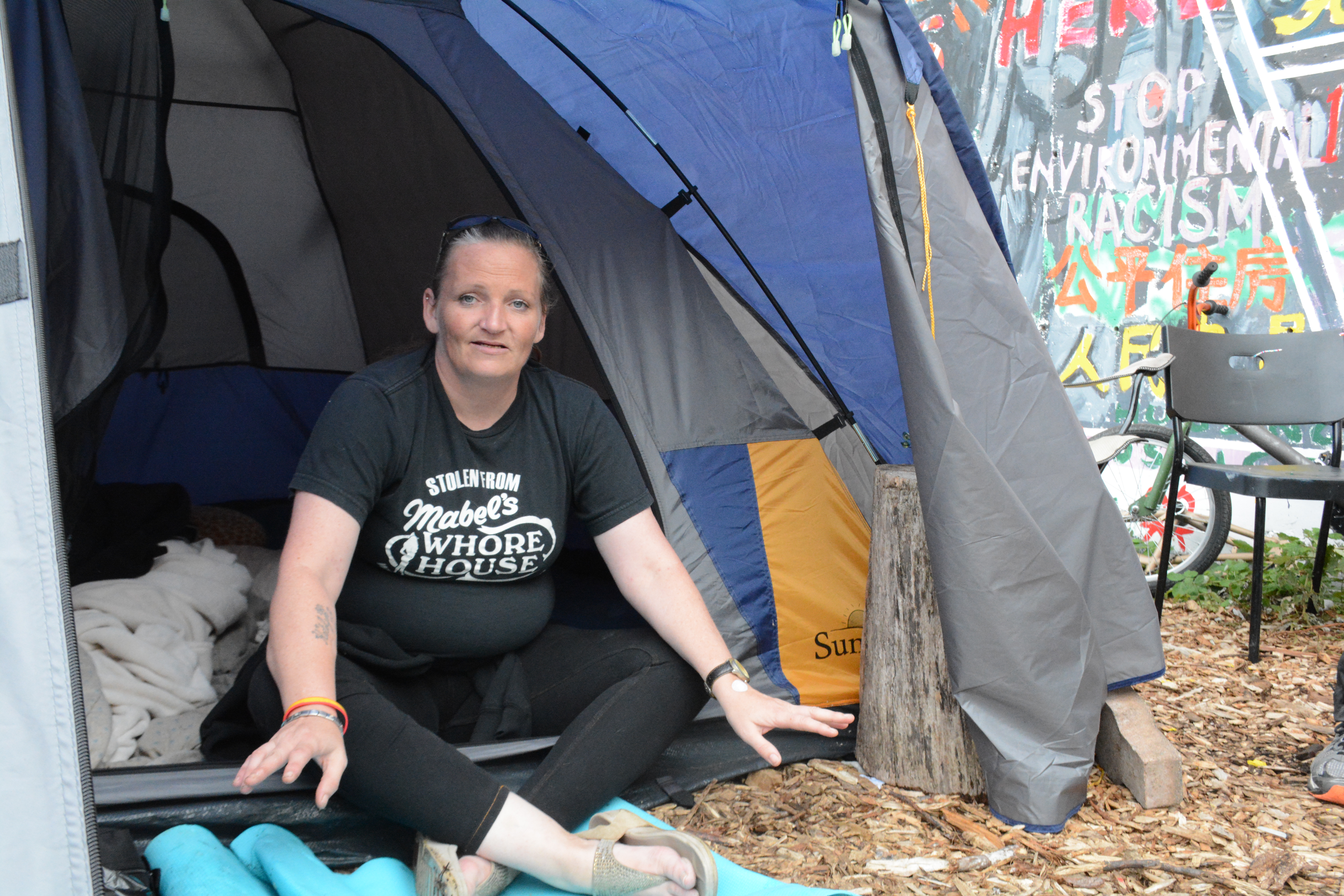 Laura Shaver
“We’re here to show that many, many people that are in the Downtown Eastside are homeless. Look at how fast this pumped up and you still see how many people are sleeping in the street. It’s insane. Victoria InTent City, because of that, the government designated and bought three new buildings and they’ll be housed in the next few weeks. They’re leaving voluntarily and housed— that’s huge, and sustainable housing. We don’t want single-room occupancies. A lot of people living in those are fighting with bugs, the rats—not having hot water, not having working toilets. We even have a better toilet here than in some of the buildings. That’s sad. We have different meetings at night, as a community, when we’re having dinner. We have needs, and talk about things we didn’t like, talk about ways to change those. That’s huge. People feel like they’re involved: they have decisions in how we do things here. That’s big. When you feel that it’s your own and you’re part of making the policies and guidelines, it changes how people treat things.” 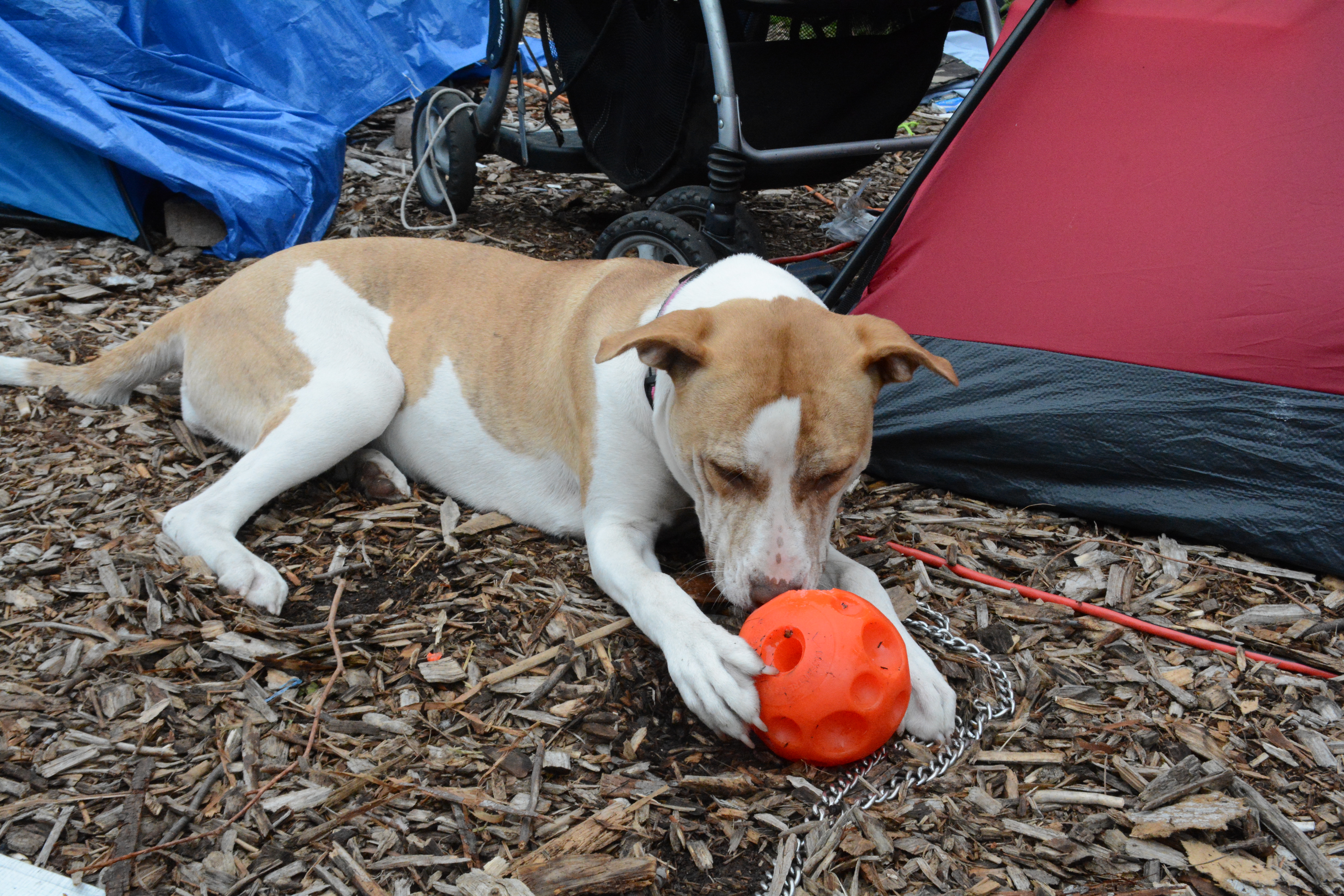 Robyn Brown asked not to be photographed for the piece, and instead offered to have her dog Shelby in the picture (above).

Robyn Brown
“I got kicked out of the shelter for talking to my fiancé outside who wasn’t supposed to be there. And the first thing I thought was we’d go to the shelter downtown. All of them are full. So I said, ‘What about tent city?’ So we showed up here, talked to Samona and Barb, and they invited us in, and we put up a tent. They gave us a spot and a number. They told us the rules and it’s pretty simple. I can’t afford housing. I can get on income support and be on it by myself, but you only get $375 for rent. It’s hard to find even a room that will take you with a dog. [I’ve been in shelters] on and off for three years. We had some places in between. It’s not fun. I’ve never lived like this. I had three jobs. I worked seven days a week. I raised my daughter by myself. I had my own place, a car, truck—it just kind of went downhill. I’m not really sure what happened. No major drug or alcohol abuse. I can’t work right now. I did housekeeping, and I did customer service—every day all day over in Squamish and Whistler. Then I got hit by a car a few years ago. I suffer from major migraines and the sun, fluorescent light hurts my eyes. This isn’t too bad right now but this is not my ideal anything. I really don’t like it, but it’ll get better.” 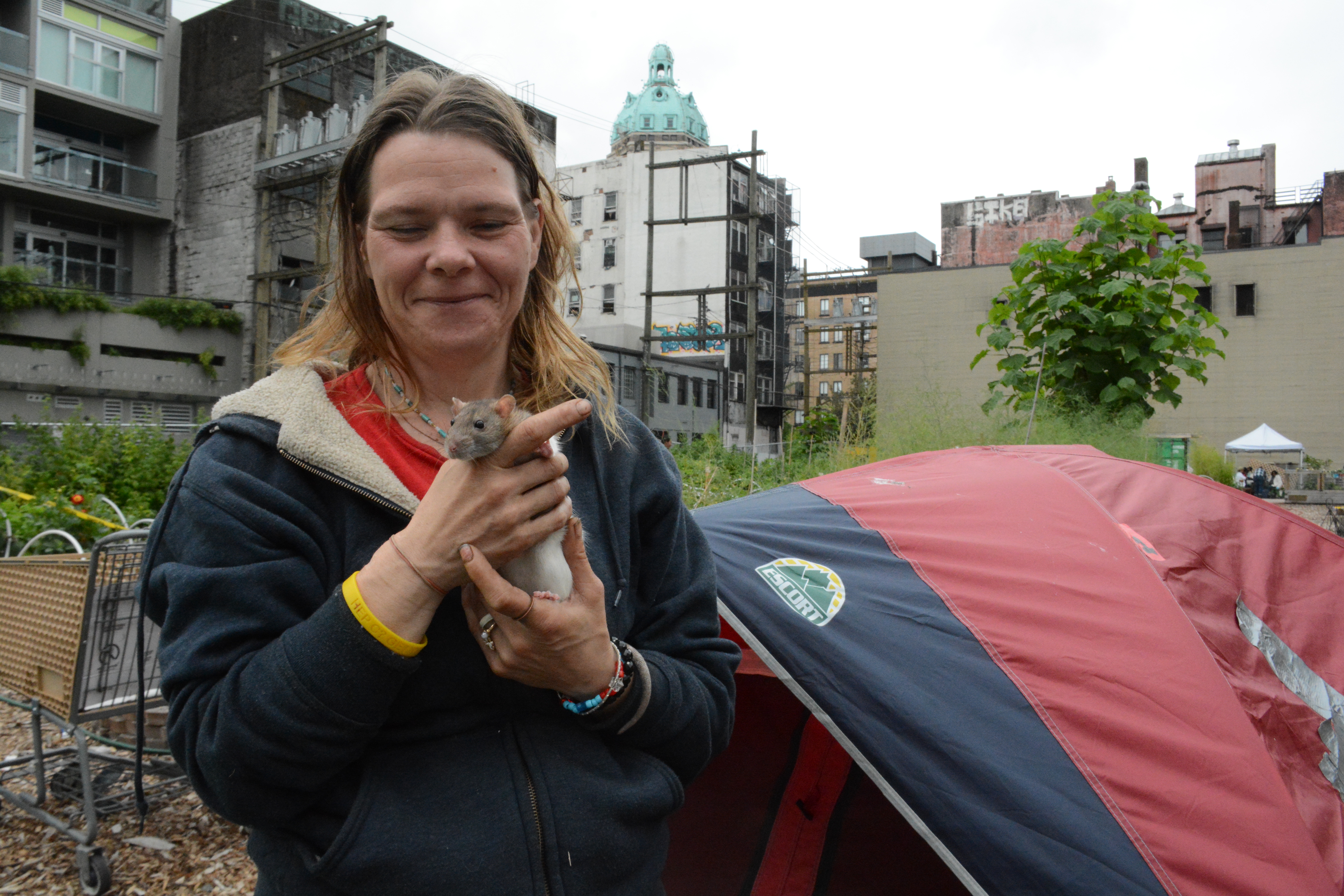 Samona Marsh
“We came here because this site, minus that half of it [the community garden], I would say is unoccupied and it’s city land. We’re so tired of living in places like that SRO where we had more bugs in there than there is out here, you know? And Carnegie does a good job for some things, but their idea is as long as I throw them in somewhere it doesn’t matter. Well, it does matter. We want our own kitchen, our own bathroom, we don’t want somebody to say, ‘Oh, it’s welfare day and yeah you’re going to use on welfare day because most of you are addicts and you can’t have any friends in there, so you have to use by yourself or go outside.’ It’s silly. We’re not kids. We’re all adults. We need our own stuff. I was at Oppenheimer Park [tent city last summer]. And basically what we did was we looked at Oppenheimer Park, we looked at tent city in Victoria, and we looked at the Olympic tent city. And whatever they said no to, like keeping tents three feet apart, no candles, fire hazards for the garbage. As long as we have the fire chief happy then we’re good. I’m not going anywhere.”