join us donate
LOG IN or SIGN UP
Liquid syntax error: Error in tag 'subpage' - No such page slug join
find a vendor
June 06, 2012 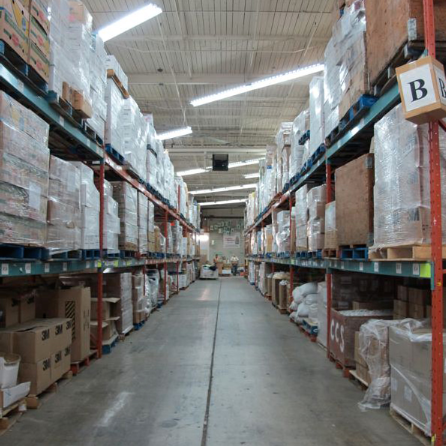 Dwarfed by long rows of shelving units that reach up to the warehouse ceiling, there are so many boxes and  labels and colours and signs that the eye can’t seem to  settle on any one thing.

My tour guides, Doug Aason, director of community investment, and Craig Edwards, director of warehouse and  transportation (and acting executive director), turn my  attention to the large industrial scale adjacent to the  warehouse loading dock. Everything that comes in or goes out is weighed on that scale—and last year, the  warehouse received 4,840,971, pounds of food.

Aason tells me they used to receive a lot more product  that would come and go without ever leaving the floor of  the warehouse. Spoiled vegetables. Dented cans. Expired  tofu. But the food bank has made a concerted effort to  educate donors about what’s acceptable and what’s not, says Aason, and they say it’s working. “We’ve got a lot of support from fantastic donors,” says Edwards. “Right now we’re the best we’ve ever been.”

Along with these depots, which serve 9,000 individuals in total, the GVFB provides food to more than 100 meal providing members agencies, like missions, drop-in  centres, shelters and community kitchens.

In the inventory planning office, a large whiteboard mounted on the wall shows columns and figures that represent everything in the warehouse, and everything  that isn’t.

The GVFB works with a nutritionist to do menu planning,  says Edwards, and they plan a month in advance. The  numbers in red represent everything they need: protein, starch and fibre. Whatever has not been donated is  purchased to fill gaps, which are inevitably in the  protein and fibre categories.

Edwards shows me an example of an order form for New Westminster food bank, which serves 975 members total, according to the form.

This week, a single person would receive a jar of peanut  butter (that’s the protein), a box of Kraft Dinner (under the starch category), a tetra pack of soup, two  snacks, one baked good, two miscellaneous beverages, a pound of potatoes, one vegetable (fresh or canned), one fruit (fresh or canned), and a half dozen eggs.

“We try and do a protein, starch, we try and include some fibre, we have filler items, we either do a fruit  and veg, or we do a canned fruit,” says Craig.

The filler items are snacks. They have in stock 220,000  individual items under the snack category this month, by far the most of anything on the board. (Miscellaneous  beverages is the second most voluminous category, with 34,578 items, then baked goods at 20,144 items and dry  soup at 20,072 items.) 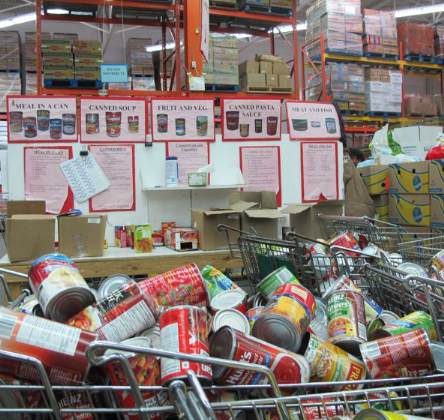 Most of what’s in the warehouse— all those shelves stocked with all those boxes—are  snacks. They receive a lot of snacks, says Edwards,  although over the past few years they’ve tried to just  get healthy snacks. Granola bars or “anything with peanut butter or some protein levels,” he says.

The food bank sometimes receives items with virtually no nutritional value—“candy and crap” says Aason, which are  sometimes tossed, and sometimes used as “filler items.”  It’s not stuff that they want, but the junk food is part  and parcel with reclamation.

In the grocery world, reclamation used to be an  individual from a company—whether it was Pepsi or  Kellogs or Kraft—going to grocery stores and collecting  their company’s unsold product so that it could be  written off.

Eventually reclamation companies—like Allied, for  example, whose clients include Safeway and Sobeys— stepped in to provide this service. These companies are  contracted to pick up all unsalable goods from grocery  stores at once. Then it all goes to a warehouse where  it’s scanned through a system that itemizes what came  from where, before everything is donated to a food bank.

I ask Aason if they couldn’t be more choosy about the  items they receive through reclamation programs. It’s  something they’ve thought about and discussed, he tells  me.

“The problem with that is then the reclamation companies  will identify with other charities where they can take  the food. We wouldn’t want to jeopardize the good  percentage of great food that we get—canned goods.”

The food bank would rather absorb the cost of disposing  bad food they don’t want to give out, rather than forgo  the stuff they do want.

“[The] phenomenally large amount of good, great food  actually, that we get far outweighs the cost of having  to dispose of the other stuff,” says Aason.

Go to the website of the food bank and there its mission  statement is declared to be providing food to those in  need. However, Edwards cites a different purpose.

“The main angle of the food bank, has been for the past  five years, and will continue to be, keeping food from our landfills in one way or the other.”

Whose interest is that mission really serving, wonders Graham Riches, a professor emeritus at UBC’s School of  Social Work who has been following the proliferation of  food banks since the early 1980s.

In the early days, food banks were largely community-, church- and even union-based operations that “were  acting on a moral imperative to feed the hungry because  assistance benefits weren’t adequate.” 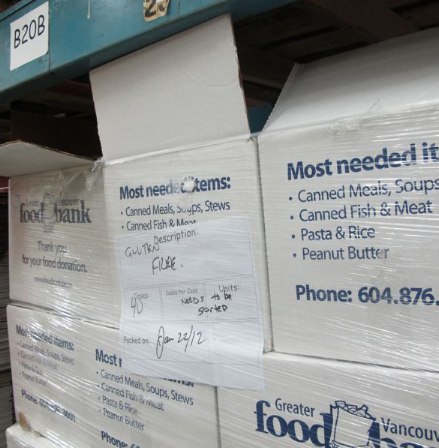 Food Banks Canada’s annual Hunger Count, a snapshot of food bank usage across the country based on surveys, incorporates information from 4,188 food programs (both members and non-members of the association).

The picture it paints is daunting. Demand—while it  levelled off this year after a spike during the 2008  recession—shows no sign of decreasing, and food banks  struggle to keep up. According to the survey, 35 per cent of food banks ran out of food during the survey period and 55 per cent needed to cut back on the amount  of food provided to each household.

While industry players like Kraft Canada help Food Banks Canada financially, through fundraising campaigns, Food  Banks Canada has put forth policy proposals to return  the favour to the food manufacturing sector as well.

Like a charitable tax incentive plan, which proposes to “allow food manufacturers, importers, distributors and retailers to deduct from taxable income the production  cost of food donated to food banks, plus one-half of the  unrealized appreciation (with a maximum deduction of twice the production cost).”

This would effectively create a financial incentive to donate food instead of disposing of it.

But Riches says this raises two concerns for him. The first is that it will remove from supermarkets products that would normally be marked down in price. The second  is that it’s unethical for corporations to be receiving market value tax breaks for donating product that is unsalable anyway.

“You’ve got food corporations, who you could say are partly responsible for serving a lot of food that is not very healthy, not very nutritious food, and food being  wasted,” says Riches. “But instead of being taken to the dump, it’s recycled into the community.”

Concerns about “the ongoing poor nutritional quality of  the food being distributed” was one of the reasons why  the Unitarian Church of Vancouver (UCV) decided to stop serving as a food bank depot in 2009, after 30 years of operation. 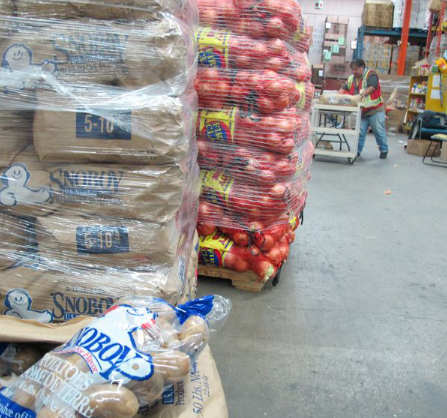 In an emailed statement, Reverend Steven Epperson of UCV listed the other reasons:

“Negative environmental impact of an inefficient warehousing and distribution system.

“A burgeoning number of ‘clients’-at best, our depot could serve about 60 families; the number had swelled to 120-plus; the site and volunteers were being  overwhelmed.

“Most important—food is a right; it should not be  considered or dealt with as a charity which, in fact, is the inherent nature of food banks and the nature of the  relationship that obtains between those who contribute  to them and dispense food on the one hand, and those who receive it on the other. Provincial and federal policy  should be created in such a way that ensures that those  in need of food assistance receive it in a manner  consistent with food as a right, not a provisional,  charitable hand out (e.g. living wage and/or food stamp legislation).”

In response, Edwards stated in an email that the GVFB has, and is, making efforts around the area of nutrition “to ensure we are able to provide clients with the  healthiest food choices possible.”

“In addition to the local produce we purchase, we are  also working with local nutritionists to make the most of our resources while caring for our community. While  we appreciate all the donations we receive, moving  forward you will also see the request for healthier choices in the items being donated by the public. We are  committed to helping in the realm of education by  formally asking for healthier variations of the food we receive.”

It’s one of the largest purchasers of eggs in the  province, buying more than 9,000 dozen every week. They also purchase between 10,000 and 16,000 pounds of  potatoes per week from Heppell’s farm in Surrey, and regularly receive about the same volume of organic  apples from a farmer in the Okanagan.

And the food bank already sustains a host of programming that is focused on many of the same goals and priorities  and other agencies focused on the right to food are prioritizing, points out Aason.

For example, from 2010 to 2011, the food bank nearly doubled its budget (from $6, 876 to $12,025) for Fresh Choice kitchens program, which runs instructional meal  programs at community service centres around the Greater Vancouver area. It also delivers food to over 100 agencies— places like missions, drop-in centres, soup kitchens and shelters—which serve more than 16,000 people every week.

According to Aason, the food bank is looking to take a more active role in the community, working to build capacity within it.

The GVFB also has operational capacity—trucks, warehouse  and cold storage space—that is beyond many of the small organizations it serves, and it has established  relationships with farmers, says Aason. What if they could purchase fruits and vegetables on behalf of organizations that couldn’t otherwise afford it?

“We’re now in a position, financially, where we can sustain a bad year,” says Aason. “We think it’s a great opportunity to show some leadership.

“What I say is, let’s work together.”

This article originally appereared in TheTyee.ca. All photos by Colleen Kimmett.