join us donate
LOG IN or SIGN UP
Liquid syntax error: Error in tag 'subpage' - No such page slug join
find a vendor
October 03, 2011 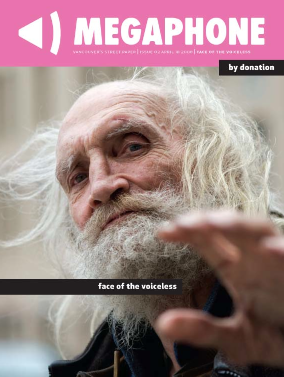 It is with deep sadness that we have learned that Jipsy, a iconic resident of the Downtown Eastside, has passed away. He was living in the Dodson Hotel and had been sick in the hospital for a about month with health problems before his passing.

Jipsy was on the cover of the second issue of Megaphone (April 18, 2008) and could always be seen wheeling himself around the neighbourhood.

The photo was taken by Ahmad Kavousian—more of which can be seen here.

He had been homeless in the past, but was able to get a room in the New Dodson Hotel. He could often be seen panhandling at Cordova and Seymour outside Waterfront Station.