join us donate
LOG IN or SIGN UP
Liquid syntax error: Error in tag 'subpage' - No such page slug join
find a vendor
January 15, 2013

Leaving a Mark: Graffiti at the Bosman tells story of housing program's success 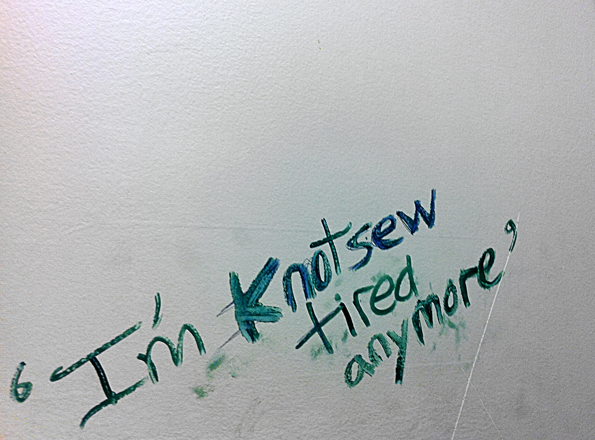 All photos by Justin Langille.

Scribed in plain green marker on a patch of off-white near the third floor, the graffiti taunted me. It was the middle of the night and I was tired, with hours left until my 12-hour shift was over.

As I swept the stairs of the old hotel, I wondered who wrote this triumphant announcement. I imagined a resident casually leaning against the wall after a quality night's sleep, marker in hand, throwing off exhaustion with the dash of a pen.

The permanent marker glyphs and surrealist murals of contemporary street graffiti have always intrigued me, but the work decorating the halls of Vancouver's Bosman Hotel Community have become my favourite over the years. The words and images etched throughout the building convey what it's like to be alive and survive in a time when it is easy to become excluded and disenfranchised. They are the thoughts and feelings of people who've lived through trauma, and emerged resilient.

Before moving to London, ON last August, I worked with the Portland Hotel Society (PHS), a Vancouver organization providing safe housing, health services and harm reduction (clean needles, water and other injection drug supplies) to low-income people struggling with addictions and mental illnesses. 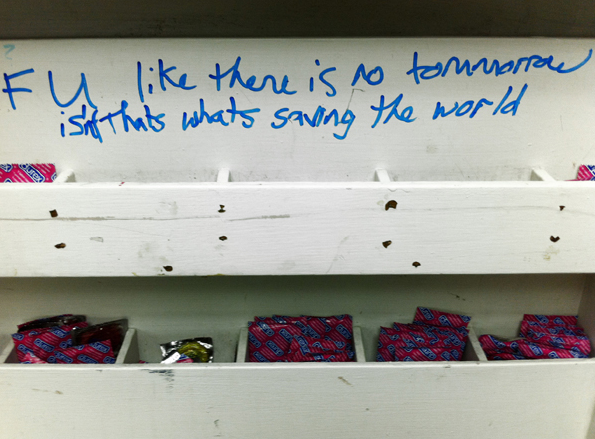 After weeks of training, I spent the winter of 2010 learning how to support some of the most marginalized people in Canada's most affluent city. I worked on call at many different PHS-run residences in the Downtown Eastside, but also took shifts at the Bosman, just off Granville Street.

An old motor hotel once frequented by road-weary tourists and locals seeking drinks at its after-hours bar, the building's current tenant is the At Home (or Chez Soi) study, a $110-million national research project initiated by Mental Health Commission of Canada (MHCC) with the goal of examining a "housing-first" approach to addressing homelessness.

Since November 2009, researchers in Vancouver, Winnipeg, Toronto, Montreal and Moncton have tested the simple idea that giving a person a place to live first is the best way to help them address the chronic health problems that contribute to their homelessness. Each city has a regional demographic focus in the study: urban Aboriginal culture in Winnipeg, diverse ethno-racial backgrounds in Toronto and in Vancouver, substance abuse. In Vancouver, about 160 people considered moderate to high needs currently live in apartments spread through the city, but 95 high needs people dealing with chronic mental illness and addictions live in suites at the Bosman.

Known clinically as the At Home study's "congregation site" (other study participants are housed individually), residents have been living in the hotel since July 2010. Nurses and case managers are on shift daily and doctors are available for ongoing health support. Recreation, writing and recovery groups help people manage their illnesses and seek treatment. It's a gradual process. The transition from street living is extremely challenging. Residents deal with the pain of chronic addictions and mental health daily, cycling through phases of improvement and relapse.

However, initial national study findings show a housing first approach has succeeded. In three years, study participants have spent more time in stable housing than those in the existing system, accessed fewer acute care and emergency services, and had less frequent interaction with police. Every time I worked at the Bosman, I saw successes. With sound sleep, full stomachs and clean clothes, people can begin to regain their health and rebuild their lives. Many residents I knew chose to advocate for themselves, access social services and work towards personal goals. Housing is only one part of addressing homelessness, but it is fundamental to moving forward.

On March 31, 2013 the At Home study and its federal funding are scheduled to finish. What's next for Bosman residents remains uncertain. 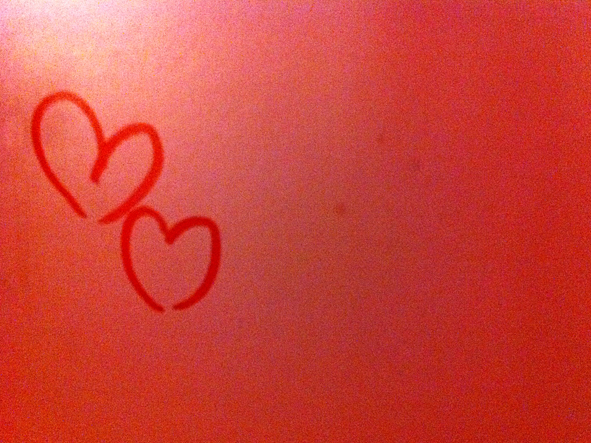 At first, I took photographs of Bosman graffiti to remember the messages written on the walls, but started taking more once I realized how short the life of the work might be. As maintenance staff clean and fix the building, messages are gradually erased under layers of paint. There was also the end of the At Home study to consider, and the question of what place Bosman residents will call home afterwards.

Residents and staff members are worried about post-study life. Beyond a core group of federal government partners and study management making decisions, it is not publicly known where they will live afterwards, exactly when re-housing will begin or when residents will find out. On shift, it was an emotional conversation topic for many. I decided to talk to those involved with the study and the Bosman from the beginning to find out the latest news.

The original plan for winding down the Bosman was to re-house 25 residents each month in the four-month period leading up to the end of the study on March 31, according to Liz Evans, executive director of the Portland Hotel Society. However, this is no longer a likely scenario, said Catharine Hume, Vancouver director of the At Home study.
Alternative, "more nuanced" plans will be put in place to re-house Bosman residents, said Hume, but that's if a request by the MHCC to the federal government to continue funding housing for At Home participants isn't approved first.

The Bosman and the At Home study are Health Canada funded projects administered by the MHCC, with additional Bosman funding coming from the City of Vancouver, the Street To Home Foundation and the Vancouver Foundation. This spring, the MHCC requested $24 million from the feds to extend study housing in all five study cities for two more years, until more permanent plans are made to transition them to new housing.

The request suggested there is not yet enough accurate information released from the At Home study that would allow provinces and municipalities to properly re-house residents from the study, so more funding is needed to keep participants housed in the meantime, Evans and Hume confirmed. 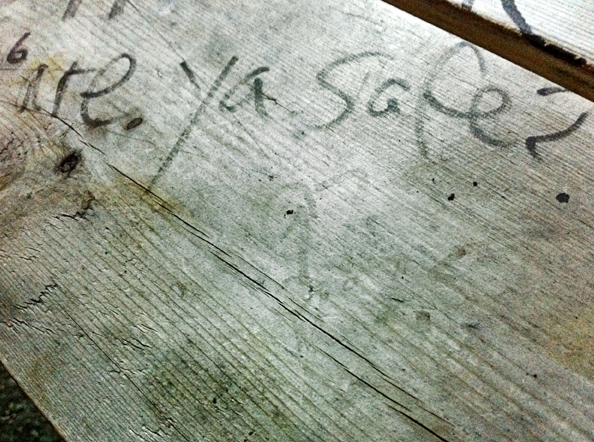 Both said negotiations are underway with the federal government to have a funding extension approved. So far the negotiations have been positive and they've been told not to panic, Evans tells me. Human Resources and Skills Development Canada (HRSDC) is a department that has "expressed interest in the study," said Evans. When I asked Hume if HRSDC was involved in approving further funding, she would only say they have petitioned a number of ministries, are in "active discussions with them around how to proceed" and that the federal government "at large" was responsible for making a decision.

A November 8 message to project team members provided through Cameron Keller, vice president of mental health and homelessness for the MHCC, shed some light. "The government has expressed its shared concern for the welfare of participants as the demonstration project comes to an end," Hume read to me from Keller's statement over the phone.

"Options are currently being explored on how best to support an extended transition process beyond March 2013," according to the last bullet point, issued just four months and 22 days from the end of the study.

The deadline for the MHCC request issued in the spring has long come and gone, and residents at the Bosman are worried, Jeff West, manager of the Bosman, wrote to me in an email. However, everyone is cautiously optimistic that waiting on the feds will be worth it and funding for housing Bosman residents will be extended for at least one more year.
"People are definitely waiting to see what happens before making decisions to move out... there really are few to no options for many folks," wrote West. 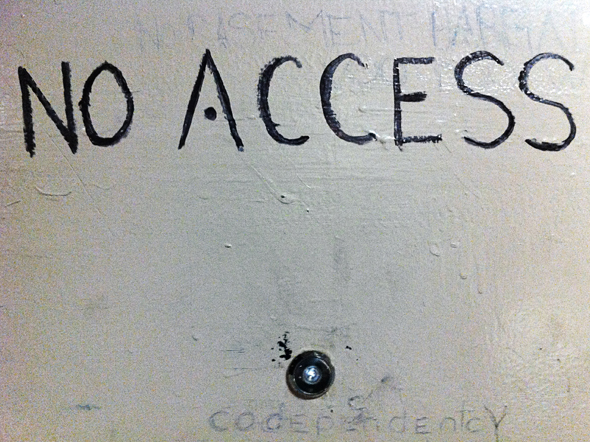 What home can be

The proclamations in the Bosman graffiti art are powerful reminders of what home is and can be.

If you don't live in an At Home city, visit the study website to learn how the research might inform housing solutions where you live. The National Film Board's multimedia website devoted to the At Home study is also a good entry point. People living at the Bosman today have shared valuable information that will help all levels of government see merit in first housing people who are homeless and in need of help.

I miss seeing new work strewn about plain wallpaper on a whim. I miss being provoked by exclamations like "I'm knot sew tired anymore" at 4am or finding creative truisms like "mistakes make everybody" buried in suite door collages in red marker, just bright enough that you notice. 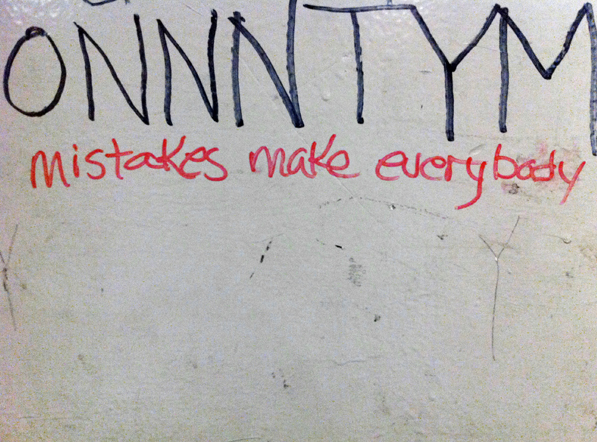 My favorite piece of Bosman graffiti is a bit of rhetorical wit, the kind of wise guy joke someone prods you with, a bit of world-weary wisdom.

Late one night, while loading laundry machines with a few bags of towels, I leaned over to see the query "where is all of my love" written in a slight arc with standard issue blue ball point pen on the paint covering a concrete wall.

Below, the simple answer: "where ya were." 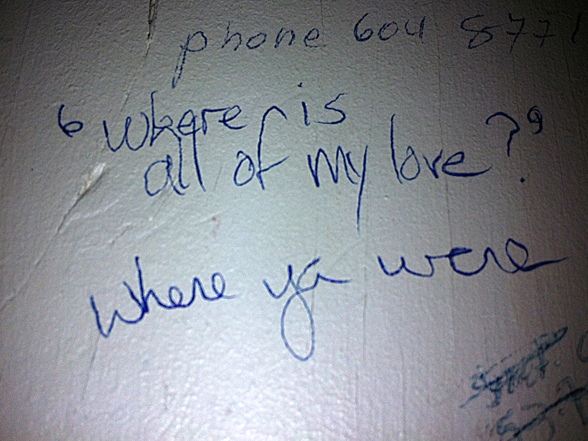 This story originally appeared at TheTyee.ca.