join us donate
LOG IN or SIGN UP
Liquid syntax error: Error in tag 'subpage' - No such page slug join
find a vendor
May 31, 2012 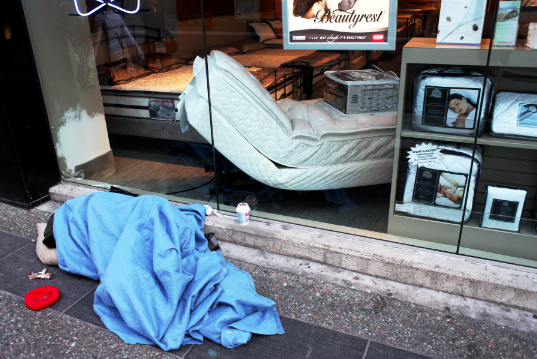 The results from Vancouver’s latest homeless count have Mayor Gregor Robertson and Vision Vancouver councillors spinning numbers and passing blame. It’s time for the mayor to stop playing politics with the numbers and take some responsibility for the city’s homeless crisis.

Over the past decade the number of homeless from one-day homeless counts has increased in the City of Vancouver from 628 in 2002 to 1,602 in 2012. After nearly tripling from 2002 to 2010, the numbers have remained pretty consistent over the past three years. While it shows that we’re getting some sort of grip on the crisis, it is a troubling signal that we’re not making a significant dent either.

But what has Mayor Robertson so worked up is the increase in the number of street homeless (as opposed to those staying in shelters). That number has fluctuated from 93 in 2002, to 811 in 2008, and back down to 154 in 2011. It went back up to 306 in this year’s count. And that’s bad for him, politically speaking.

"[The increase in street homelessness] is directly connected to the low-barrier shelter beds not being adequately funded over this past year,” Robertson told the Vancouver Sun. “I think the pressure on affordable housing continues to push more people out on to the street."

But if Robertson and Vision Vancouver are so enraged about their closure, they could have funded them. The city didn’t come in with the $1.5 million to keep them open— instead, it sent in the police to arrest the homeless and activists who were protesting their closure. So much for solidarity.

Robertson, Vision Vancouver and city staff are also blaming BC Housing for not including enough homeless people in new developments—about 38 per cent of new tenants are off the street, while the others come from Single Room Occupancy (SRO) hotels and at-risk housing.

But it’s important that people in vulnerable housing have the opportunity to move into more secure housing once it becomes available. And housing providers have been adamant that you need to mix the chronic homeless with the more stable poor. It’s na.ve to assume that you can pick up the city’s entire street homeless population and put them in one housing development without any problems. Different people require different kinds of support.

The numbers from the homeless count are a gross undercount. It’s impossible to find every homeless person in the city in one day. And there’s no way to count the hidden homeless—those sleeping on couches or floors. The real number could be double or triple whatever the count finds.

The count is supposed to simply provide a snapshot. The city should be using it as a guide to show trends and get an understanding of where we need more support. It’s not enough for Robertson to just blame others—especially when the city isn’t stepping in itself. We have seen enough talk from the mayor on homelessness. We need to start seeing some action.