join us donate
LOG IN or SIGN UP
Liquid syntax error: Error in tag 'subpage' - No such page slug join
find a vendor
July 04, 2012

MEGA-FICTION | "Choc Norris: The true but conflicted story of a thwarted candy robbery" 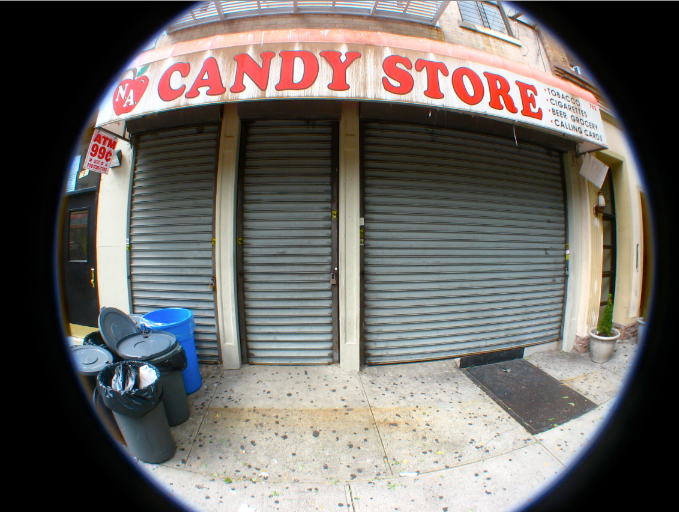 Despite the predominantly cold summer we’re having, it’s a hot afternoon in downtown Vancouver, and I decide to go into 7-11 on Georgia to buy a refreshing beverage.

When I walk in, there is a skinny man standing by the candy rack just staring at the movie-sized candy bags of chocolate treats. His shirt is tucked into his pants, as is his opened jacket. Next to him is a short female employee restocking a shelf. He stares at the candy with focus and determination, and all of a sudden he starts furiously grabbing handfuls of the candy bags and stuffing them quickly into his open coat. The clerk stands and lets out a “Hey!”, at which point the thief bolts for the door. I instinctually reach out to grab him, but he shakes off my arm and runs out into the street.

Without thinking, I automatically take off after him, in my suit jacket with my messenger bag slung over my shoulder. As I run out the glass door, I can hear the clerk call out, “Just let him go!” But I can’t.  I don’t know why, but I am going to stop him.

He runs around the corner into the alley and I follow. As I enter the mouth of the alley I stop running, plant myself and call out, hoping to stop him with my voice the way Albert Finney stops the train in that movie The Dresser, a technique that was also employed by my dad over 20 years ago when a man broke into our home and stole my sister’s ghetto blaster. In his pajamas, Dad chased the thief into the park behind our house and shouted some sense into the robber, who miraculously put down the boom box and kept running. And so now in this downtown Vancouver alley I call out, “Drop the stuff!” He doesn’t. “Or I will arrest you!” I don’t know where that second line came from; am I trying to impersonate a police officer?

Or did I mean I would have him arrested? It definitely gets his attention. He turns back to look mid-stride, loses his footing and his baseball hat, which falls to the ground. He reaches backward to grab it awkwardly, but seeing me he decides to keep running.

I slowly enter the alley, and carefully pick up the hat with a pen like they do on CSI, and put it into my evidence messenger bag. Maybe it will be a clue for the police, once they start to investigate this sugar-coated crime. I move deeper into the alley, stalking my prey.

The alley is L-shaped, turning to the right. A big truck and a small car are parked nose to nose at the bend in the road. The truck driver is speaking Mandarin jovially with a young woman. I ask them, “Did you see a man run past you?” The woman says, “What?” C’mon people we’re losing time. I ask the question again. The truck driver says through a smile, “We too busy to see anything.”  I’m not going to ask you to testify in court, I just want to know where he went. This wasn’t going anywhere, so I press on alone.

I look around the dumpster, keeping a cautious distance in case he is hiding there with a knife or a needle. But nothing. Then I come to a loading bay, where big dudes are lifting heavy boxes off a truck. There’s no way these guys would have let a running sketcher go past them into their place of work. The alley then opens out onto the street. I look down the busy sidewalks and see no commotion that would have been inevitably caused by a man running wildly. Where did he go? He couldn’t have gone too far.

That’s when I see a set of concrete stairs going down into the lower mall. I walk to the top of the stairs, and sure enough down at the bottom, sitting on the concrete ground, is the thief rearranging his shirt and jacket as bags of chocolate fall out.  The door to the mall must have been locked. I have him trapped. “Drop the stuff!” I call out again. “I have your hat!” He drops a few bags at the bottom of the stairs saying, “All right, there ya go.” He starts to walk up the stairs towards me. “Drop all the stuff!” I say. “That’s everything,” he says, but his shirt is still bulging, making him look like his stomach has many sweet malignant tumors. “I can see the bags falling out, drop them ALL!” He drops a few more halfway up the stairs. His shirt is still lumpy with chocolate.  He says, “I bought these at another place.” Now he’s at street level and I point my finger in his face, saying, “You’re a liar and a thief!” He responds with “Well, okay, I didn’t buy them, but I got them at another place.” “I don’t care, drop the stuff!”  He drops a few more at my feet.

Now we are standing face-to-face, and something changes in me. Just looking at him, my sympathies shift. His dentures are falling out, his arms are covered with marks, cuts and burns.  This guy is obviously a junkie. But he wasn’t stealing a loaf of bread to eat, he was stealing armfuls of sugar, which can’t be good for whatever teeth he might have left. I was now wondering how far I would go for this corporate candy. It wasn’t my candy, nor did it even belong to a mom and pop shop that was struggling to get by. These spoils were taken from a company so huge in its reach, that when I was in the remote islands of South East Asia trying to escape western consumerism, there always seemed to be a 7-11 to ruin my quaint skyline. But that was halfway around the world, and right now this guy is also wondering how far this is going to go. Am I going to try to haul him in? Am I going to punch him if he resists? Is he going to stab me for his freedom? I hold out his hat and say, “Next time, ask if you’re hungry.”  He takes the hat and scampers away like a half broken piñata, candy still spilling out over his pants.

I grab the bon-bon booty and head back to the crime scene. There are five boys next to the store drinking Slurpees, and Big Gulps watching me emerge from the alley carrying the bags in my arms like wounded soldiers. The kids’ eyes go wide, and they say things like, “Woah!” and “You got him!” and “How’d you do it?” “I just tracked him down and asked him for the stuff,” I say as I walk in the store.

I plunk the chocolate treasure down on the counter saying, “This is yours.” The man behind the counter, who looks to be my age and my size (mid-thirties, medium build), echoes the kids outside, “How’d you do it?” I repeat myself as I walk to the back of the store to get my delayed refreshment. I stand and stare through the glass door unable to pick a drink. My eyes just keep scanning the same sodas over and over again. I must look the like the thief before he started stuffing himself.

The short female clerk comes up to me by the cooler, shakes my hand and thanks me. She’s the manager. She says he and a few others come in regularly to steal specific brands of stuff to resell to a ‘fence’. Evidently there is one type of beef jerky that is so sought after that they have to keep that one brand of meat locked up. She says she’s bought many poor folks living downtown sandwiches and food from her store, but that these guys were stealing products they know they can sell, so that they can get enough money for their drugs.

“It’s a sad situation,” she says, with a weariness that I would expect from someone working in harm reduction or social services. But I guess a convenience store in the downtown core can give you a front line view of the class war in this city.

I go up to the counter to pay for my drink, but the manager says, “It’s on me. It’s the least we can do.” I thank her and walk out. Sitting on the sidewalk in front of the store is a man begging for change. He has a big smile and looks at me and says, “You pulled a Chuck Norris in there.” I thank him and say, “I admire you. You’re just as poor as him, and here you sit, smiling, asking people for help instead of just taking stuff that doesn’t belong to you.”

“Guys like that give guys like me a bad name,” he replies. I put a loonie in his hat. He goes on to tell me that the same guy had been arrested there for stealing once, and that he changes his look every time. “The time he got pinched, he asked me to watch his bag for him, and sure enough it was full of candy, too.”

I walk away and on the surface I feel like a chocolate covered hero, but something was sour in my nougat centre.  I’m not so different from that poor junkie thief. Yes, I’m much more privileged than him, I have a roof over my head, a career, a family that loves and supports me, but on my modest artist income there are things I justify to myself for stealing. I download TV shows sometimes, because I can’t afford cable. I once took a belt loop off a belt in a store because I didn’t want to have to pay for a whole new one just to replace a tiny part. In fact, I was about to hop on the SkyTrain to go home without paying the fare. The train was going there anyway, right? But luckily my thievery is a lot subtler, so there’s not much chance of me being pursued and made to face my crimes by some self-proclaimed Hershey hero.

But now when I look in the mirror I see Choc Norris looking back at me, and he’s telling me to drop ALL the stuff.