join us donate
LOG IN or SIGN UP
Liquid syntax error: Error in tag 'subpage' - No such page slug join
find a vendor
July 22, 2013 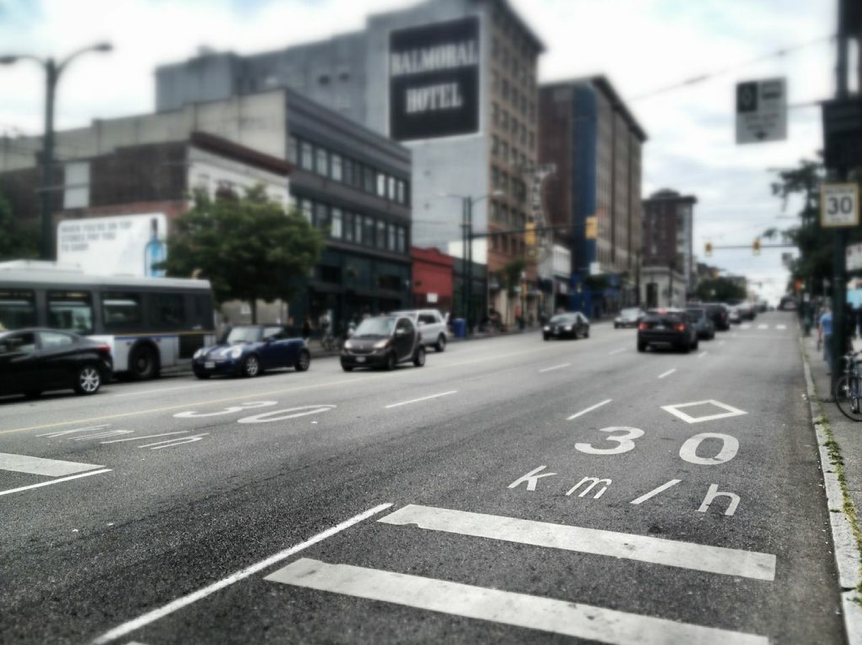 Community members are calling on the city to pressure police to enforce the speed limits along East Hastings Street after recent pedestrian fatalities, but the Vancouver Police Department (VPD) says it’s pedestrians, not drivers, who need enforcement.

On June 4, a man was struck and killed while crossing Carrall and Hastings streets. Almost a month later a woman was killed when she fell under a bus at Main and Hastings. Both intersections are within the 30 km/h speed zone established two years ago.

The Downtown Eastside Neighbourhood Council (DNC) believes speed was a factor in both accidents, and has called on the City of Vancouver to pressure the VPD to enforce the speed limit.

“Drivers have learned that they can cruise right through here at 50 [km/hr] and there are no repercussions,” said DNC board member Jamie Richardson, adding he doesn’t think the VPD issues speeding tickets in the area. Richardson said the VPD’s only enforcement in the area has been the installation of two signs showing drivers their speed.

The 30 km/h zone was implemented as a result of the Pedestrian Safety Project, a Vancouver Area Network of Drug Users study of traffic safety in the Downtown Eastside. Funded by the city, the final report had over 20 recommendations, including the 30 km/h zone. The DNC says many of those recommendations have yet to be implemented.

VPD Const. Brian Montague told Megaphone via email that speed wasn’t a factor in either death. But he couldn’t tally the amount of speeding tickets issued in the area in the past two years. VPD has issued over 2,000 jaywalking tickets in the neighbourhood since 2009. Montague says it’s because of traffic safety.

“We concentrate our speed enforcement and write most of our tickets where we have speed-related collisions,” he wrote. “The ultimate goal is to educate the public [whether pedestrian or driver], deter people from engaging in illegal and dangerous behavior and reduce traffic related fatalities.”

“I know that [VPD] are down there [along East Hastings], but I’m sure that people have concerns and would like to speak to them about their enforcement,” she said.