join us donate
LOG IN or SIGN UP
Liquid syntax error: Error in tag 'subpage' - No such page slug join
find a vendor
April 29, 2013 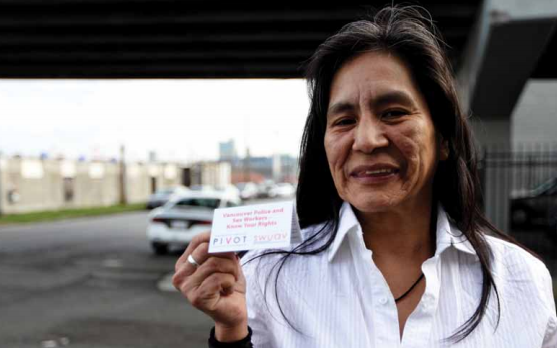 Pivot Legal Society has launched a private security edition of the ‘Know Your Rights’ card in an attempt to draw attention to survival sex workers’ issues with private security guards in the Downtown Eastside (DTES).

Unlike the original ‘Know Your Rights’ cards which provide information on what citizens should do when dealing with police, Pivot lawyer Douglas King says the new cards are about what private security guards can’t do.

“There’s a pretty big misconception there about what private security powers are, so the main purpose of the card is to dispel that myth,” said King.

Some of these myths include a belief that security guards can move individuals from public spaces like parks or sidewalks, and perform search and seizures of personal belongings.

“[Sex workers] experienced [verbal] harassment from the guards,” said King, adding guards have also taken photos and videos of sex workers and their clients. “In some cases, the guards have actually physically tried to prevent clients from picking up sex workers or followed clients once they’ve picked up a sex worker and put the sex worker under high beams.”

The Strathcona BIA has spoken to both Pivot and CSC about the complaints. Executive director Joji Kumagai told Megaphone “we’ve also instructed CSC patrol to make sure that they don’t undertake those activities in their rounds.”

The BIA is issuing a Request for Proposals for a new private security contract soon. They’re expecting a proposal from CSC, as well as the Mission Possible Neighbours Program, which trains mostly DTES residents to patrol their neighbourhood.

“We will be reaching out to our members very shortly to get some feedback and direction from them very shortly, and then that will help us understand what our membership is looking for,” said Kumagai.