join us donate
LOG IN or SIGN UP
Liquid syntax error: Error in tag 'subpage' - No such page slug join
find a vendor
August 19, 2013 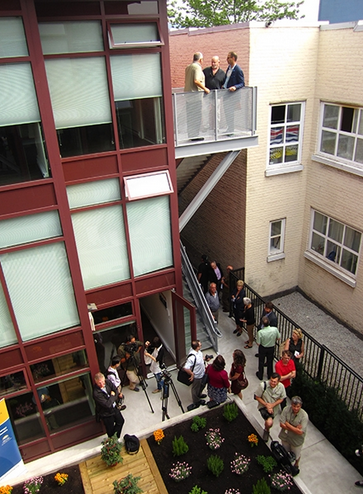 Social housing built from recycled shipping containers were unveiled in Vancouver earlier this month, becoming the first of its kind in Canada and providing a model for future housing projects.

Located at 502 Alexander St., the 12-unit, three-level non-market housing project is made of 12 recycled shipping containers was unveiled by Atira Women’s Resource Society.

The development features self-contained units ranging from 280 to 290 square feet in size. The first occupants, who will be women over the age of 50, are expected to move in next month.

Six of the units will go to renters who will pay 30 per cent of their gross annual income to a maximum of market rent. The other six will be home to older women who have been homeless or at risk of homelessness and rent for $375 a month.

Construction costs of the project were an estimated $82,500 per unit, compared to the $220,000 cost per unit in a conventional concrete housing project completed by Atira on Abbott Street.

Abbott told The Province that preliminary work has already started on Atira’s plan to develop “a more sophisticated” shipping container housing development on a site at Hastings Street and Hawks Avenue.

The society hopes to gain city approval to build 42 units in a seven-storey project that would require 42 recycled containers.