join us donate
LOG IN or SIGN UP
Liquid syntax error: Error in tag 'subpage' - No such page slug join
find a vendor
September 04, 2013 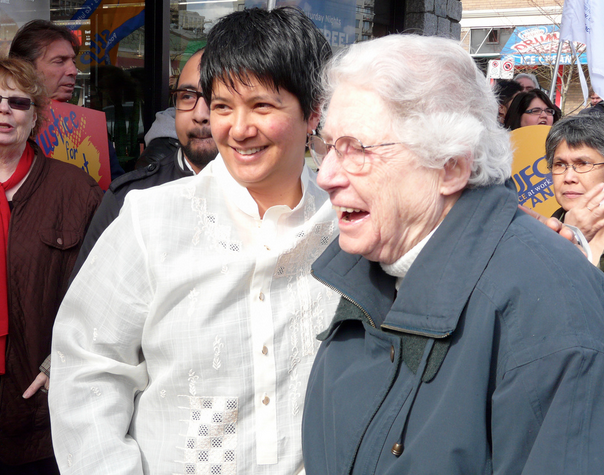 Sister Elizabeth Kelliher was one of four nuns in the Franciscan Sisters of Atonement, which operated a Downtown Eastside soup kitchen until 2011. But she was better known as an adamant social justice activist for low-income people during the 13 years she spent in Vancouver.

Kelliher, who passed away on August 16 at the age of 89 in Garrison, New York, served as chair of the now-defunct Downtown Eastside Residents Association (DERA) in 2009, and was an integral figure to the creation of the Metro Vancouver Alliance (MVA), a collective of over 30 community, labour and faith-based groups working for social justice.

“She was definitely the godmother [of the MVA],” says Bill Saunders, former president of the Vancouver and District Labour Council, a member of the MVA.

“She knew [the model] was effective, and that it was aiming at not just putting Band-Aids on things, but looking for fundamental solutions. She was very committed to that idea, and that’s what she was trying to get everybody to buy into: not just charity, but solutions.”

Kelliher left Vancouver in 2011 when the New York-based Franciscan Sisters of Atonement closed because too few nuns were joining the order. But East Vancouver MP Libby Davies, who remembers seeing the elderly nun at several housing rallies in Vancouver, says she left a legacy in the Downtown Eastside.

“It’s not so much she leaves a hole [in the community], I think it’s more did she mentor people? Did she help provide continuity so that other people can continue doing the work that she felt so passionate about?” said Davies.