join us donate
LOG IN or SIGN UP
Liquid syntax error: Error in tag 'subpage' - No such page slug join
find a vendor
September 05, 2013 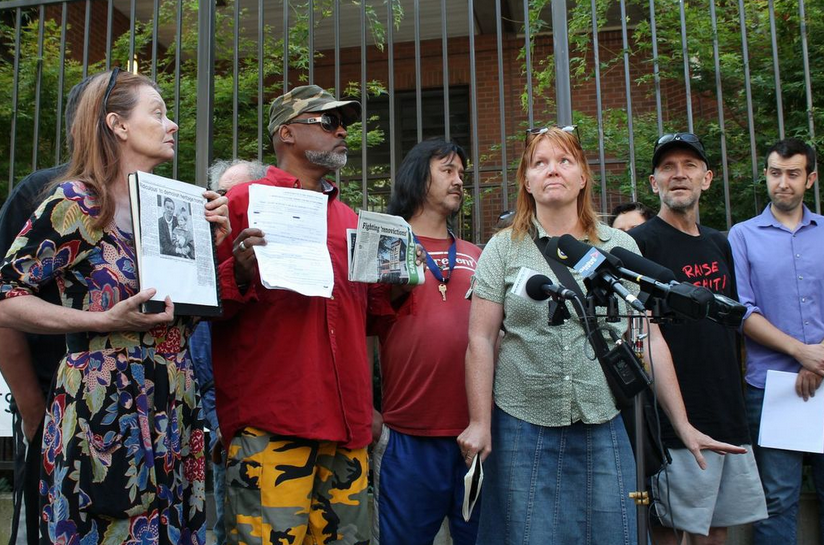 Wendy Pederson, at microphone, fights back tears at a press conference outside the York Rooms. Photo by Katie Hyslop.

Low-income residents of the Downtown Eastside’s York Rooms are facing escalating intimidation and bribery in an effort to evict them from the building, according to Pivot Legal Society and housing advocates.

At an emotionally charged press conference held on August 22 across the street from the single-room occupancy (SRO) York Rooms hotel, housing activist Wendy Pedersen said York managers are threatening some tenants with eviction for infractions like leaving their doors open or having guests, while others are offered as much as $2,000 to move out. According to housing advocates, at least seven residents have lost their housing in the last two months as a result.

“This isn’t unusual. [York Rooms owner] Steven Lippman is a notorious renovictor in this neighbourhood,” said Pedersen, who was near tears when addressing the audience, which included York Rooms residents.

Lippman’s business partner Geoffrey Howe attended the press conference and denied the bribery allegations. When addressing questions from the media, residents and activists attempted to drown out his remarks.

Lippmann is being accused of evicting low-income residents in an effort to convert the building to higher-income rentals. Pivot lawyer DJ Larkin said that City of Vancouver bylaws should protect low-income assets like the York Rooms, adding the harassment and bribery of tenants claim violates their human rights.

“[The city needs] to protect low-income residents who are in this building and who have a right to stay here,” said Larkin. “And they need to find the people who have been evicted or paid out to move and find them safe housing.”

She added the city must define “affordable housing” and “single room occupancy”, and amend their SRO bylaw to force developers to keep rooms at the housing allowance rate.

This isn’t the first time Lippman has been accused of using intimidation techniques on tenants. In a 2011 interview with Megaphone, Lippman admitted to offering $500 to $600 to tenants in his buildings that dealt drugs and preyed on other residents.