join us donate
LOG IN or SIGN UP
Liquid syntax error: Error in tag 'subpage' - No such page slug join
find a vendor
April 02, 2013 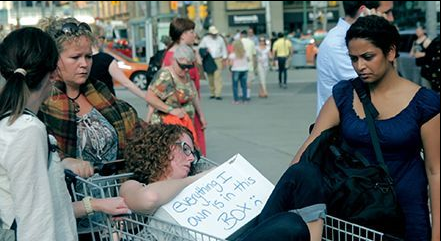 Women on average make up one-quarter to one-third of the people on official homeless counts, like the one recently conducted by the City of Vancouver. But according to the YWCA Canada, an additional 75,000 to 100,000 women and children who stay in safe houses to hide from their abusers aren’t included in these counts.

YWCA Canada launched the national Homes 4 Women campaign last month to draw attention to women who are homelessness and to advocate for solutions.

“What happens in a lot of places is they are able to get emergency shelter and services, but getting to a secure home in the community is really a problem,” said Ann Decter, YWCA Canada’s director of advocacy and public policy.

The campaign also addresses housing issues for women living on the street or sleeping on friends’ couches. Some are battling addictions and mental illness, and others are struggling to afford food and shelter on social assistance.

Decter says there’s a lack of services aimed at women. These include women-only detox beds and youth shelters, and shelters that accommodate women caring for children.

Homes 4 Women is also advocating for solutions that would help all homeless people. These include increasing social assistance, a return to federal funding for a national housing program, and increasing affordable housing options with rental subsidies and social housing units in new housing developments.

“Our approach will be to target specific remedies to the level of government that can actually enact them,” said Decter, adding YWCA is still looking for partners to work with on the Homes 4 Women campaign.

“A lot of people really don’t understand homelessness as a women’s issue, and I think in large part because women try not to be visible when they’re homeless because it’s such a high risk.”