join us donate
LOG IN or SIGN UP
Liquid syntax error: Error in tag 'subpage' - No such page slug join
find a vendor
April 10, 2013 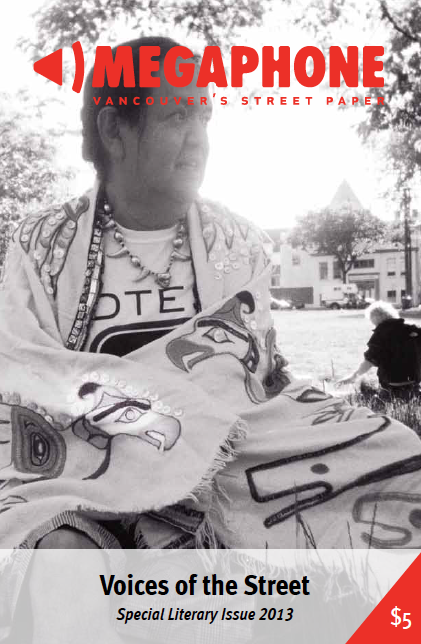 Vancouver, BC—As the fight over gentrification heats up in the Downtown Eastside, Megaphone is releasing a special issue on Friday, April 19th that raises awareness and gives a voice to the issues affecting the community.

Megaphone’s third-annual literary issue, Voices of the Street, covers complex topics such as housing, addiction and mental health. It also looks at how people in the community come together to support each other. Each of the articles is written by marginalized writers who participate in Megaphone’s writing workshops.

“Voices of the Street tells the real stories of the Downtown Eastside,” says Sean Condon, Megaphone’s executive director. “At a time when the neighbourhood is going through some major changes, these stories give us an insight into what we can do to support this community.”

"Taking Megaphone's writing workshop showed me I have a story to tell,” says Sid Bristow, who participated in the community journalism workshop and whose article, Welfare Wednesday, is published in this year’s Voices of the Street.

Sid also sells Megaphone at the corner of Cambie and Broadway. He says “it feels good getting my story published, knowing I have a chance to tell other people what it’s like to survive on the streets.”

Megaphone vendors will be selling Voices of the Street for $5, along with regular issues of the magazine. This special issue also features photographs from the Hope in Shadows calendar project.

Megaphone's launch event for Voices of the Street will be on Friday, April 19th at Cafe Deux Soleils (2096 Commercial Dr.) from 8-10 p.m.

To schedule an interview with Sean or Sid, please contact:

Megaphone is an award-winning magazine sold on the streets of Vancouver by homeless and low-income vendors. Published by the non-profit Street Corner Media Foundation, vendors buy each issue for 75 cents and sell them on the street for $2. They keep all profits.