join us donate
LOG IN or SIGN UP
Liquid syntax error: Error in tag 'subpage' - No such page slug join
find a vendor
March 05, 2012

Megaphone vendor Sid Bristow has a ticket to ride 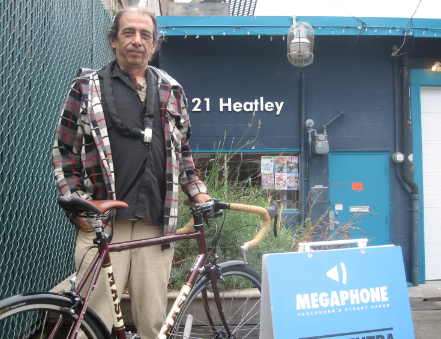 For three months Sid Bristow had one goal in mind: save up enough money to buy a new road bicycle. And so between October and December of last year, the 60-year-old Megaphone and Hope in Shadows vendor dutifully squirreled away the money he made selling magazines and calendars outside of the London Drugs at Cambie and Broadway.

Sid, an avid cyclist, needed a proper bike so he could make an epic journey to visit his family in Winnipeg. At the end of December, thanks to his hard work and the support of his customers, he was able to purchase a new Masi road bike.

“I had a goal that I wanted to buy a new bike and make a trip to Winnipeg where the rest of my family members are,” says Sid. “I've got family from here to Winnipeg. I haven't seen any of them in 20 years and if I had went by bus it would be really hard to schedule. This gives me more freedom—I'll be able to spend as much time with them as I want.”

Having once sold Vancouver’s original street paper, Spare Change, Sid started selling Megaphone and the Hope in Shadows calendar two years ago. Unable to find steady work because of chronic back pain, selling Megaphone allows Sid the ability to earn an income with dignity.

“Mostly, I like selling the magazine because I don’t have to do other things, like picking up empties or trying to make money by selling clothes on the street. That's the biggest thing I get out of it,” he says. “And getting to meet people and getting to know people.”

As Sid plugged away at the corner of Cambie and Broadway, counting his savings one magazine and calendar at a time, he met some people that wanted to help.

Ricky Shetty is the event planner for a fledgling organization called Networking With Purpose, which brings together entrepreneurs across the city who want to help end homelessness in Vancouver by 2015. Shetty met Sid at Cambie and Broadway and invited him to one of the group’s events.

“Sid has a really powerful mission, I think that’s incredible,” says Shetty. “At 60 years old, to ride a bike across the Rockies into Manitoba, I can’t do that and I’m 34. I don’t even know if most people who are entrepreneurs have that kind of mission. It’s very powerful.”

Along with helping him sell calendars and magazines at their event, members from Networking With Purpose are helping Sid with the equipment and training to get ready for the trip and with accommodation along the way. Sid plans to make the journey this summer.

For Sid, the success he’s had with reaching his goal has given him a new outlook on his life and a sense of purpose.

“It's been a long time since I've had the inspiration to do anything like that,” he says. “It makes me feel like it's not too late to keep going and to try to do something. I never had any challenges that I wanted to meet before. And for some reason I decided I wanted the bike, so I got the bike. Now I'm starting to realize that maybe there might be more challenges I might want to meet down the road. It's given me the ability to go tackle it.”

Sid sells Megaphone at the corner of Cambie and Broadway.

For more information about Networking With Purpose, visit NetworkingWithPurpose.ca.