join us donate
LOG IN or SIGN UP
Liquid syntax error: Error in tag 'subpage' - No such page slug join
find a vendor
September 22, 2011

It’s not just about competition, however. The international street soccer movement changes lives. Over 70 per cent of players improve their lives: they build their self-esteem; come off drugs and alcohol; move into homes, jobs, education, training; repair relationships; and become social entrepreneurs, coaches and players with pro or semi-pro soccer teams. The Homeless World Cup (HWC) project involves over 50,000 homeless people throughout the year. The tournament isn’t all about who takes home the trophy (though congratulations should go to Scotland’s men’s squad and the Kenyan women for capturing the titles this year), but about community, camaraderie and the sense of belonging that street soccer creates.

This year, Canada sent a women’s squad to the Homeless World Cup for the first time ever. Here, goalkeeper Debbie Krull writes about her experience not just travelling and competing in Paris, and, most importantly, what soccer has meant to her life: 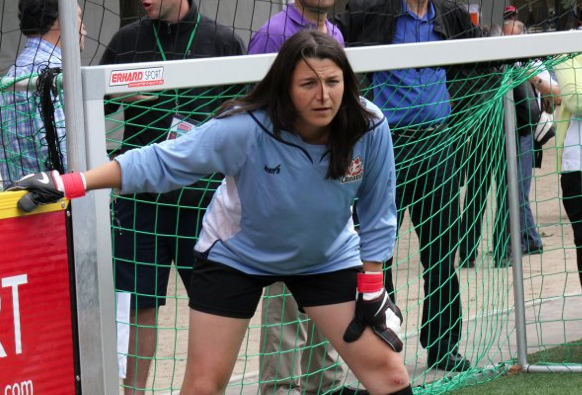 Debbie Krull in net during the 2011 Homeless World Cup in Paris. Photo by Levi Regala.

Prior to the tournament, the Vancouver Street Soccer League and PHS Community Services Society helped me overcome various impacts of being homeless as an individual, as a mother, as co-op member and as a creative through the Portland Phoenix women’s soccer team. The HWC presented an opportunity to represent a country I admired, but also held a resentment towards based on its legacy of colonization.

This combination lead to a bundle of inconceivable outcomes I could never have predicted, including the disappearance of my resentment which was lost as my mind, body and spirit wrapped themselves in raw, new experiences.

As I gained hope and love and built relationships throughout my journey, I became more and more comfortable as anaboriginal Canadian goalkeeper for Team Canada. For the HWC opening parade, I painted my face and wore my Elk buckskin yoke over my Team Canada uniform with the Canadian flag as a shawl.

Collectively, our team truly represented the diversity of the hidden homeless in Canada. Amongst us was a four-month-old infant, a two-year-old, a youth who recently came out during Vancouver’s Pride Week, single mothers and an Elder.

Walking underneath the Eiffel Tower representing the teachings I’d received from my Elders and coaches was so incredibly empowering, I felt completely unified with everything around me including the sky. Right before we marched onto the Champ de Mars, I spread my Canadian shawl as an eagle and danced.

When Argentina, Brazil, Norway, Malawi, Uganda, USA and India were selected for our group at the Stade de France, a journalist asked us how we felt facing Brazil and Argentina.

“Fearless,” I responded. “Really?!” he asked. “Not scared?” “Not at all,” I said. I expected to feel pain and to be disappointed if they didn’t score 20 goals. Well, none of the teams scored on us that much, but I wasn’t disappointed. 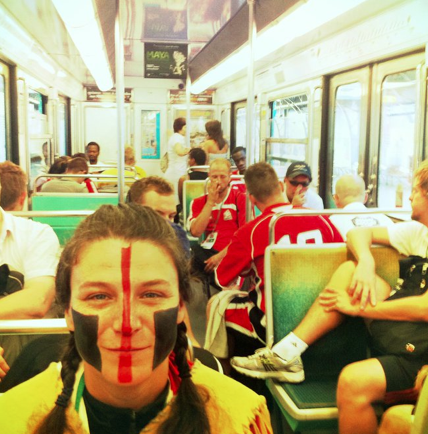 Debbie Krull at the 2011 Homeless World Cup in Paris. Photo by Sarah Blyth.

Before each game we were filled with excited nervousness. My heart pounded, my stomach tightened so hard I felt like I would puke, and when we faced famously skilled teams like Argentina and Brazil my hands would shake. But if part of that was fear, singing the Lil’wat Nation's Women Warrior Song prior to each game grounded us, gave us strength and we were fearless by kick-off.

As soon as the referee’s whistle blew to start a match, our minds were locked in the zone. Absolutely nothing else mattered. It’s amazing what your mind captures, how your body responds and how a team becomes one when all are completely focused. In that state, your body simply reacts in an elegant demonstration of what it has learned over years of related practice and experience, including the years of childhood.

I didn’t know that after giving birth three times my body could still fly from one end of the crease to the other. It takes a sharp eye, focused mind and sure hands to capture a rocketing ball launched by a player whose experiences in her country have contributed to her own footie skills.

Being in a Street Soccer match against players who you know carry pride in their country, team and family on an international stage activates athleticism, self-being and team unity. As a fellow HWC participant from Paraguay shared on her Facebook album, you never know how strong you are until being strong is the only choice you have. 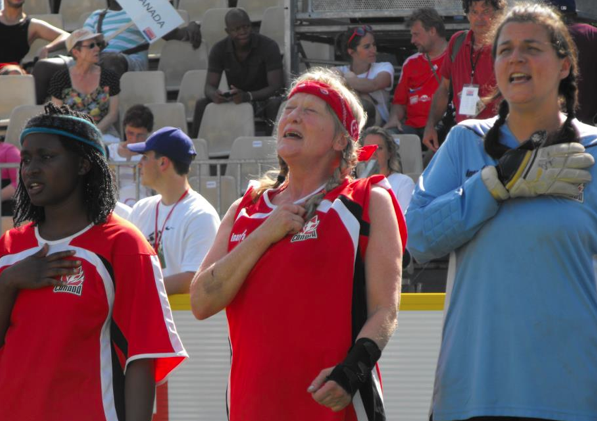 The new awareness put me in awe of all sorts of new possibilities, including fighting for a governance structure that could end homelessness and becoming a street soccer coach. I feel I have experienced a push towards ending homelessness from within through playing soccer. I’m extremely proud of our team and honoured to have witnessed how our achievements created beautiful expressions of pride on one another’s faces that were mirrored on the faces of our coaches and supporters, and even on those of our opponents.

The HWC experience also blessed us with an assortment of outings to absorb the depth of France’s cultural identity. My hands didn’t just stop balls in Paris: they touched the doors of Notre Dame, the bullet holes in the limestone of the National Jail and the iron work on top of the Eiffel Tower. Each of these moments is unforgettable.

The highs of the trip also came with times my heart sank such as seeing homeless children as young as my own doing what they need to do to survive. On their own in broad daylight, they blessed us with genuine smiles and waves. We learned to return the warmth without gifting them anything more, as the police might arrest them and return the gifts to us.

During the closing ceremony, we were reminded of troubles at home when we learned that the reason another player originally selected for the women’s Team Canada wasn’t with us was that she had gone missing shortly before the tournament. My thoughts and prayers went out to her just as my resolve to fight homelessness strengthened.

Filled with and humbled by gratitude, I continue to be blessed and empowered by the street soccer movement, my teammates and my coaches.