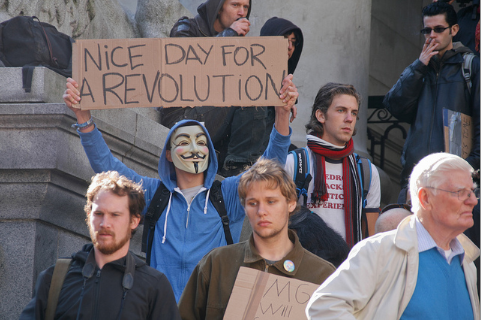 Protesters at the Vancouver Art Gallery for the Occupy Vancouver protest on Saturday, October 15th. Photo by Stephen Dyrgas.

Saturday was a perfect fall day and a perfect day for a gathering. Singing, drumming and pot smoke filled the air. Infants strapped to backs, raging grannies, people of all ages, sizes, colour were represented at the Vancouver Art Gallery to kick off Occupy Vancouver, one of the hundreds of off-shoots of the month-long Occupy Wall Street protest that began in New York.

The Occupy Vancouver differs from the goals of the Wall Street movement, which hopes to reform taxes and regulate banking. But it’s missing cohesion. I couldn’t help but wonder: What is tying all this together?

Change, of course, is the answer. People want things to change. But how? And to what?

The official website says “We are committed to an inclusive and welcoming space, to addressing issues of oppression and discrimination, and to creating an environment where all the 99% can be heard and can meaningfully participate.”

The speakers that I saw were eloquent and well-informed. And they were mad or they were happy. They were running for Vancouver’s park board or wanted to end the war on drugs or wanted to protect BC’s water table. The guy beside me was angry about BC Rail. Another wanted Bush charged with war crimes. Everyone had a message worth hearing.

And it’s understandable why people want to get together. It’s comforting to know that that feeling that the world ain’t right isn’t yours alone.

The organizers behind the movement seem to understand that they don’t have many answers. Everyone seems to be crossing their fingers in hopes that something will change. That the forests will be saved, that the marginalized will have their rights recognized and protected, that greed won’t be the driving force to organize the many moving parts on this planet.

But the problem with a forum like this is that it’s exhausting, overwhelming to think about, especially without any solutions in sight. Marching down to the financial district feels good, but it’s Saturday and no one but the cleaners are working in those buildings.

Apathy is not the answer. And it’s very good that people are getting informed and that the momentum is gaining. But without a clear focus, without committees of well-connected people, (connected not just to each other but within the systems that need to be changed), the movement will burst, or fizzle, or become a Wikipedia entry about that time we almost had a chance to change things.

Hope and potential are necessary elements for change. So here’s to hoping that this is a gainful step in the right direction.