join us donate
LOG IN or SIGN UP
Liquid syntax error: Error in tag 'subpage' - No such page slug join
find a vendor
November 20, 2012

OPINION: Homeless people need protection under the law, not punishment under it 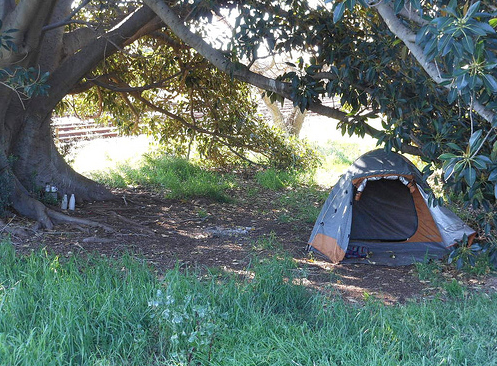 This past September, a Vancouver police officer on patrol came across a man walking near Stanley Park, bleeding from his head. The 39-year-old homeless man had been sleeping near Lost Lagoon in Stanley Park when he was assaulted. He was taken to hospital and he was treated for lacerations to his face and a fractured skull.

The following day, the story “broke” after the Vancouver Police Department released a short media release which provided the particulars of the incident and urged anyone with information related to the crime to come forward.

The police spokesperson added that two other homeless men have been attacked this summer at nearby locations, although police had not found any information linking the cases together.

From a media perspective, that was the end of the story. But on the ground, the situation has continued to unfold. Over the past weeks, Pivot Legal Society has talked to homeless men in Stanley Park and documented six assaults since those first reported.

Some of the victims have talked to the police, some have chosen not to report, and instead are finding more isolated places to sleep in an attempt to avoid detection by would-be assailants. This series of assaults against homeless men is not surprising in light of research looking at rates of victimization among homeless people.

A report released by the Institute for the Prevention of Crime at the University of Ottawa in 2008 surveyed the literature on victimization among homeless people throughout North America. The researchers concluded that those without adequate shelter are more likely than the housed to be victims of violence. For women, the lack of adequate shelter correlates to an increased risk of sexual assault.

One Canadian study referenced in the report looked at victimization among homeless people and found that 46 per cent of women and 39 per cent of men surveyed had been physically assaulted in the previous year, an astoundingly high number.

When surveying only homeless people sleeping outdoors—as opposed to in a shelter—the rate of victimization soars to 71 per cent. Notably, nearly 80 per cent of these incidents are not reported to police.

There is little doubt that violence against homeless people occurs at an alarming rate, but it is not always understood why this is the case. There is the obvious reality that homeless people spend a lot of time outside during the night in public spaces. However, there are other factors at play, particularly that homeless people are criminalized by virtue of their poverty and lack of secure housing.

There is also the fact that despite their visible marginalization, homeless people as a class are not protected by provincial or federal rights codes. These two factors, taken together, create conditions that make homeless people particularly vulnerable to targeted and opportunistic violence.

Criminalization of homeless people is embodied in provincial statutes and municipal bylaws, which regulate where people can or cannot sleep outside. In Vancouver, the set of three bylaws governing public property effectively prohibit homeless people from legally sleeping outdoors anywhere within the confines of the city. Violators are subject to civil fines and criminal charges.

But it’s not only that act of sleeping outside that brings homeless individuals into conflict with the criminal law. As a group, homeless individuals are more likely to be charged with minor property offences, drug offences, and violations of bylaws compared to those with a fixed address. Homeless people regularly receive tickets for vending, jaywalking and setting up tents on public property.

Because it is often difficult for homeless people to negotiate the complex justice system, what begins as a municipal bylaw ticket often escalates into more serious charges resulting from missed appointments and court appearances.

The second issue is that despite the overwhelming evidence that homeless people are often targets of discriminatory and abusive actions as a result of a number of socio-economic conditions, they are not afforded basic human rights protections on the basis of their poverty or their lack of housing.

It’s important to acknowledge that those who are homeless or living in deep and chronic poverty are among the most vulnerable members of our society. We need to reframe homelessness away from being a crime, and toward an understanding of homelessness as a state of vulnerability requiring additional protection.

Changes to the laws that punish homeless people for their poverty and amending the human rights code will not, in and of itself, alleviate the hardship faced by this group. However, repealing laws that result in tickets, fines and criminal charges against homeless people trying to survive and the addition of “social condition” could end some of the additional burdens that homeless people face and shine a light on the impact that discrimination, and sometimes hatred, plays in intensifying the negative impacts of poverty.

Scott Bernstein is a lawyer with Pivot Legal Society. This column originally appeared on PivotLegal.org.