join us donate
LOG IN or SIGN UP
Liquid syntax error: Error in tag 'subpage' - No such page slug join
find a vendor
January 07, 2013 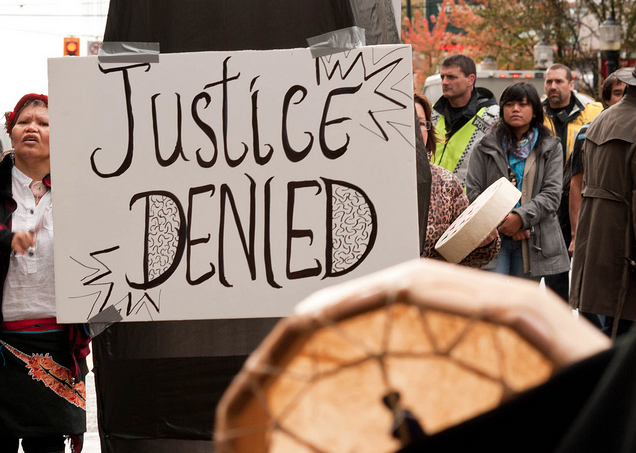 In December, the Government of British Columbia released the long-awaited final report of the Missing Women Commission of Inquiry.

Although the nearly 1,500-page document is now in the hands of the public, the answer to the question of what the ultimate legacy of this Inquiry will be remains unclear. Given the ongoing epidemic of violence against Indigenous women, women living in poverty and street-based sex workers, the answer to that question is literally a matter of life and death.

From the terms of reference to the appointment of key staff to the decision not to fund community organizations to participate, this Inquiry’s focus was the law enforcement apparatus. It is therefore not surprising that the majority of the report’s 63 recommendations relate to police and Crown policies, inter-jurisdictional protocols and training for law enforcement.

The operational issues addressed in the recommendations are no doubt important, but they are also deeply divorced from the lived realities of the people who reached out to the criminal justice system for help in locating their loved ones, and from the lives of the women themselves.

In spite of the orientation toward justice system policy and protocols, Commissioner Wally Oppal’s call for immediate funding for a safe overnight space for women in the Downtown Eastside and for transportation options for women traveling to and from rural and remote communities in the North demonstrates an understanding that the material conditions facing women were an important factor in their vulnerability. There are also a number of recommendations that speak directly to the impacts of criminalization on women’s ability to report violence.

Where the takeaway message of the report becomes much less clear is on the critical issues of bias and discrimination.

The Commissioner takes the strong position that the missing and murdered women investigations were “a blatant failure”, and lists bias and discrimination as being among the many causes. That finding is, however, watered down by a series of semantic maneuvers on the part of the Commissioner. While the report states that bias allowed faulty stereotyping of street-involved women and led to a failure by police to recognize their "duty to protect an endangered segment of our community,” the bias was not intentional.

The report also finds no evidence of widespread institutional bias in the Vancouver Police Department (VPD) or RCMP. The Commissioner further undermines many of the powerful statements and recommendations in his report by failing to make any findings of individual misconduct or systemic misconduct by anyone involved with the investigations. The Commissioner attempts to address his discordant findings by making the case that society at large should bear some responsibility for tragedy.

He writes: "I have found that the missing and murdered women were forsaken twice: once by society at large and again by the police.”

The Commissioner made a decision not to take a strong stance on institutional bias or to hold any individual to account, despite the countless examples of people working in the justice system acting on prejudices and permitting a culture of discrimination to go unchecked in their workplace. In the process, he may have firmly cemented the legacy of this Inquiry as an exercise that condoned the silencing of marginalized communities and missed critical opportunities for reconciliation.

Yet, looking back on everything that has unfolded during the Inquiry, it is clear there is another way forward. As unrelentingly tragic as it is, the story of this Inquiry is also full of heroes who refused to make allowances for racism, sexism and discrimination on the part of those in positions of authority or in their our own lives: Family members who never gave up on finding their loved ones despite being dismissed by those charged with serving the public and protecting the vulnerable; women who have marched through the Downtown Eastside every Valentine’s Day for over 20 years to draw attention to epidemic of gendered violence in their community and who protested outside of the Inquiry office everyday for the first month of hearings; a lawyer who gave his all to representing the families of the missing and murdered women despite being vastly outnumbered and prevented from calling critical witnesses or securing important documents.

It is the dedication, integrity and vision for social change of those individuals that highlight the opportunity for this Inquiry to leave a legacy that does justice to the memories of the Downtown Eastside’s missing and murdered women.

That opportunity rests in our collective capacity to follow the lead of the heroes of this story and to settle for nothing less from our police, our justice system and our elected officials.