join us donate
LOG IN or SIGN UP
Liquid syntax error: Error in tag 'subpage' - No such page slug join
find a vendor
March 09, 2011

Opinion: Pain in Portraits: The cancellation of Pamela Masik's art exhibit was a missed opportunity 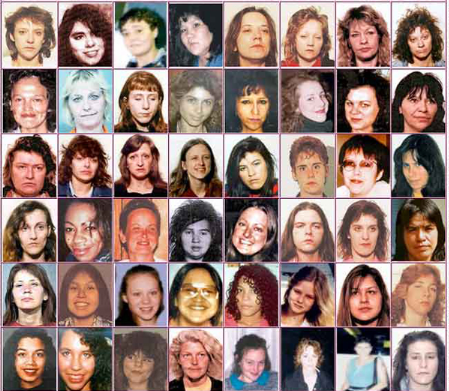 This Valentine’s Day, hundreds of people gathered at the corner of Main and Hastings for the 20th annual Women’s Memorial March. With sorrowful songs, speeches and silence, we remembered the many women who lost their lives to violence. But the recent decision to cancel an art exhibit of Vancouver’s missing women was a lost opportunity to help the city keep remembering.

Last month, the University of B.C.’s Museum of Anthropology (MOA) decided to cancel Pamela Masik’s “The Forgotten” exhibit, which consists of 69 large-scale oil painting portraits of missing and murdered women. It was supposed to open this month.

The portraits are powerfully dark and shocking. Using the police’s missing women poster, many of the portraits were based on the women’s mug shots. In order to tie the women to their brutally tragic fate, Masik often painted blood to their faces and slashed the canvases with knives.

But where many saw raw pain, aboriginal and women groups in the Downtown Eastside saw exploitation. They claim the portraits are disrespectful and play into the very stereotypes that perpetuate violence against aboriginal women. Without their support, MOA balked at launching the exhibit.

Clearly, since the purpose behind Masik’s exhibit was to raise awareness about the horrific violence that many aboriginal and low-income women face, more should have been done to bridge these worlds around the exhibit. MOA and Masik should have consulted and worked with community groups before the exhibit was announced and done more to connect with the issue.

But the community leaders also share some responsibility in this misstep. The Women’s Memorial Group Committee rejected a proposal to include their own separate exhibit that could have given them the voice they felt was missing. And it appears there is a lot of resentment around the fact that Masik is an outsider—a white woman who lives in Yaletown.

Ultimately, this controversy is about ownership. The aboriginal and women’s groups that oppose Masik’s portraits want, and deserve, control over the violence that afflicts their families, their community and themselves. Being able to sympathize with this pain is a privilege that many of these women do not have.

But in order for us to stop the violence against aboriginal women (and women of all ethnicities and class) we all need to take a sense of ownership on this issue. We all need to feel connected to this loss and make an investment in our communities to keep this from happening again.

Whether you appreciate the portraits or not, Masik invested herself in the pain of these women. It is unfortunate that MOA, Masik and the community groups could not come together and find a way that would allow the rest of the city to share in this sorrow.