join us donate
LOG IN or SIGN UP
Liquid syntax error: Error in tag 'subpage' - No such page slug join
find a vendor
February 24, 2014

Out-of-the-box housing solution: Seven-storey recycled tower the next phase of a project too good to contain 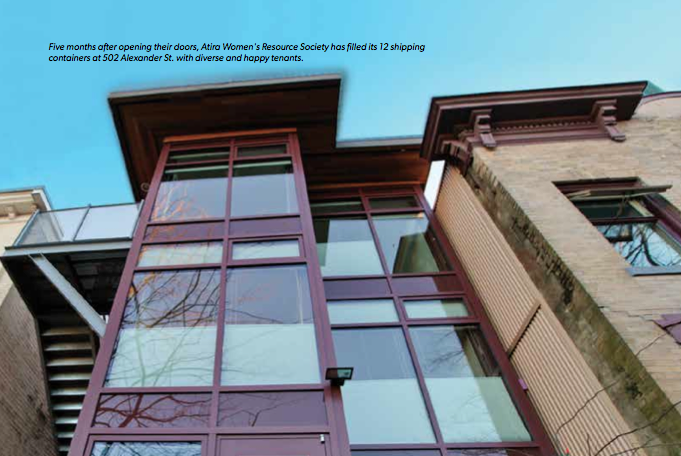 Two women chop vegetables at a large central table in a tight common kitchen, chatting as they gently drop celery and red peppers into a central bowl, destined for snacks during upcoming community programs. A stream of younger women move in and out of the space from the other rooms at Imouto Housing for Young Women, talking happily with each other.

“What a beautiful place it is!” Gayle, one of the snack-preparers tells me. “I love the opportunity for community with the other women, because we have so much in common.”

Mostly, however, Gayle (who only provided her first name) loves having her own home. She says she had been “travelling around a lot,” staying with friends or nannying her granddaughter. In late November, she moved into a corrugated metal shipping container on the adjacent Atira-owned property.

At 280 to 290 square feet, each suite is a self-contained home with wood laminate flooring, a separate entrance, its own bathroom and—best of all, three tenants told me—a European- style combined washer-dryer machine. In each unit, a full container wall has been replaced by a giant window, many with perfect views of the harbour or the complex’s central courtyard garden.

“I love that it’s my own space,” Gayle says, laughing heartily. “Just walking in through your door, [your neighbours] invite you over for tea.”

Across the Imouto kitchen table, Ahjahla Nelson chimes in. She used to live in co-operative housing, but gave up her apartment for a friend and moved here in October.

“When I saw the container home, I’d been thinking of a trailer or treehouse or something,” she recalls. “It was like a dream come true. Being able to enter your place from the outside has a real home-feeling to it. It just felt like it was built for me.”

Media attention may have dropped away since Atira did a flurry of interviews about the then-empty containers last August. But as they’ve filled with tenants—six units for older women who serve as “intergenerational mentors” to six younger women— the windows have become cluttered with knick-knacks and personal decorations, and the common kitchen at neighbouring Imouto is getting busier, even though each container has its own kitchen space.

Community, it seems, is forming.

“It’s really in its infancy,” says Atira CEO Janice Abbott over coffee in a nearby Downtown Eastside café. “It’s been interesting to see this little community of women come together around this new, unique kind of construction. They feel really proud to live there. It’ll be interesting in a year from now to see how that community develops, but it’s inspiring to watch it.”

Abbott always had faith the exquisitely staged, architecturally repurposed containers would prove “how liveable small spaces can be,” she says.

“Even though I was a believer in the beginning, the containers look a hundred times better than I ever imagined they could,” she says. “They’re really beautiful.”

In addition to the 12 container suites, the $3.3-million construction paid for 19 other non-market rental units, plus a heritage restoration of the Imouto building. The project was built on a city-owned lot in partnership with Canada Mortgage & Housing Corporation and BC Hydro.

With the suites quickly filled, Atira intended to submit a rezoning application by the end of January for a property it already owns in Strathcona. But the organization plans to go a step further: a seven-storey shipping container housing complex, with its requisite elevator and a new design.

The site at the corner of Hawks and Hastings streets has the same square- footage as the one where the pilot project sits, but it’s a different shape and the new structure aims for twice the height of the first, all requiring a new architectural plan.

Unlike the bachelor- suite prototypes at Imouto, the new family-oriented project will transform shipping containers into a mix of one and two-bedroom units.

One challenge will be securing the necessary land rezoning from light- industrial to residential, for which Atira planned to submit its application by “the end of the month,” Abbott says. Another will be to scale down the $82,500 per-unit costs. Abbott says the pilot version spared no expense with some of its “premium elements”—the fixtures, countertops and so on— because she wanted the units “to show well” as the first container housing in Canada.

“There were a bunch of cost premiums associated with building the first,” she says. “The square-foot costs are really high, they really are, but what costs money in any unit are the kitchen cabinets, the plumbing, the fixtures, the bathrooms... it’s going to take a few projects to figure out.

“If you’re building small units, and each of them has a kitchen, bathroom and front door, your square-foot cost goes up,” she adds. “But the cost per unit is really low.”

Climbing the stairs beside the current three-storey container complex at Imouto, the blue and orange corrugated metal is icy to the touch. A bitter wind sweeps in from the port to the north.

A smiling woman with curly white hair and round blue glasses opens her door, and I’m greeted by an enveloping warmth and a slight scent of roses. Susan Edwards beckons me to sit at her small kitchen table as the CBC hourly news jingle chimes in the background, where a mattress is pushed neatly against the wall-length window.

The radio is always on, she tells me, harkening back to her work years ago as co-host of CBC Radio’s morning show in Saint John, New Brunswick. She misses the excitement of broadcasting, but not the anxiety.

In the four years since she moved to Vancouver, where her daughter lives, Edwards has moved five times for a variety of reasons all too common among the city’s renters.

“It’s been just incredibly difficult to find a place to live,” she said. “I went through the experience of renoviction, I saw it happen to a lot of neighbours too... then I saw a TV item about [Atira’s container project], and thought, ‘Oh my gosh, look at that!’“

Edwards was the first tenant to move into the pilot project in September. Her unit looks out over Burrard Inlet and the North Shore mountains. She has mingled photos of her family with one of goalie Robert Luongo hanging on the wall beside her entrance. A quiet, rhythmic churning sound emanates from the corner of the home.

“Listen to that magic washing machine!” she says excitedly. “You put your clothes in and they come out dry. How could anything be more efficient?! The space is amazing.”

Although Edwards doesn’t consider herself a mentor to the younger women in the enclave, she attends communal gatherings and has formed a bond with some of the other tenants.

During the holidays, she painted a portrait of the block and had Christmas cards printed with the image. One card is addressed to the young women in the Imouto community, and sits in the main building across the courtyard.

“You have much to teach all of us,” Edwards wrote them, “and beautiful spirits that I sense in your presence. May the year ahead be one of blossoms and sunshine, so your music will be heard.”

Joining us in the unit is the manager of Atira’s intergeneration mentorship program, Jennifer Kleinsteuber, who argues that Edwards plays a vital role in the community. Many of the younger residents have struggled with addiction, mental health and poverty, but are seeking a new life.

“One woman told me, ‘I get to have a safe place to be so I can make some positive changes in my life,” Kleinsteuber says. “She came here, and it was like a fresh start in life. She’s just flourishing, she’s blooming.”

As an artist, Edwards is fascinated by architecture and design and believes this kind of housing—using recycled containers as the structure to lower costs—could be replicated “everywhere.”

“It’s amazing to do housing of this kind,” she said. “I wish I could promote that angle of things. The program is developing here, it will take time. It’s a really interesting work-in-progress.” 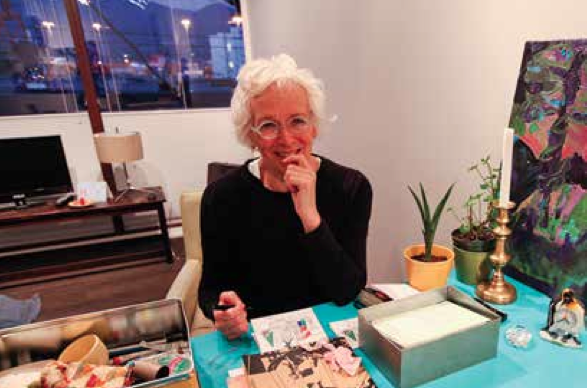 Former CBC radio host Susan Edwards was the first to move into the completed shipping container project, and is seen as a mentor to many of the younger women in the complex.

‘A sort of protection’

With its ever-expanding collection of properties in Vancouver’s Downtown Eastside, Atira is not without its detractors. So it’s no surprise some people scoffed at the optics of the project.

“There was a lot of hesitation about housing women in shipping crates,” Kleinsteuber admits. “But I didn’t have the same kind of emotional reaction as a lot of people. I read about how they are doing student residences in the Netherlands, and in the U.S. people are making studios out of shipping containers. In the end, there was amazement at how beautiful these looked on the outside and on the inside.”

Tenants like Gayle developed a keen interest in the raised-bed gardens in the courtyard between the containers, which were the source of herbs and seasonings for the community’s turkey suppers over the holidays.

“I have ideas in my head about things to do,” she says. “The mentoring really interests me.”

But even more so the gardening, she adds with a broad smile. “I’m really a foodie; I’m into food security and food sovereignty. [There are] so many things we could do right at this location.”

Across the table Ahjahla Nelson pauses chopping vegetables to philosophize about container living. She describes herself as a poet who likes “to look deeper into things.”

“What does it mean to be contained?” she muses. “Will it contain who you are, your emotions? I see [this project] as a sort of protection.”

When she was accepted into the new Imouto container suites, her “heart was really happy” to finally live “someplace I could call my home, that surrounded me.

“I’ve been in 16 different foster homes; you learn to get along with each other and help each other out. I felt like I really fit in here,” she adds. “It’s a little contained community.”

This story was produced by Tyee Solutions Society in collaboration with Tides Canada Initiatives Society. This series was made possible through the support of the Real Estate Foundation, Vancity, and BC Non-Profit Housing Association. Support for this project does not necessarily imply Vancity’s endorsement of the findings or contents of this report. TSS funders and Tides Canada Initiatives neither influence nor endorse the particular content of TSS’ reporting. Other publications wishing to publish this story or other Tyee Solutions Society-produced articles, please see TyeeSolutions.org for contacts and information.